Krystal Rivers was a real offensive juggernaut, as she led the tournament in scoring and was also its second most efficient spiker Archive Photo via Alabama Athletics 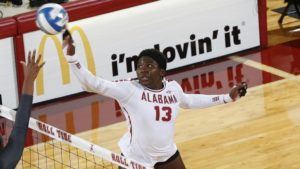 Ohio State’s Miles Johnson is one of 2 First Team All-Americans on the U.S. roster for the World University Games.

The United States’ women’s team at the 2017 World University Games didn’t give the fans much to cheer about. They finished in the bottom half of the tournament, taking 10th place out of 16 teams. Unlike the men’s team, which was star-studded and loaded with players from big-time California schools, and still finished in 17th place, the women’s team was made up exclusively of players who have exhausted their collegiate eligibility, but also aren’t a part of the senior national team system.

But, not everything was lost, as Team USA did give us one thing to be happy about. VolleyMob Third Team All-Americanand  AVCA All-American Honorable Mention, Krystal Rivers was the tourney’s authentic offensive juggernaut. A player who is no stranger to huge offensive outputs, we already had written about her 40 point game in this very tournament (she has had many in her career).

Already Alabama’s career leader in kills, today she got to add another accolade to her stellar young career. She was Taipei’s Universiade’s highest scorer. In total, she had 142 points (122 kills, 12 blocks, 7 aces) in six games. That is a whopping 23 points and 23 kills more than second place. She also did it in very efficient fashion, as she was the tournament’s second best spiker by hitting percentage.

We have already chronicled on Volleymob how Rivers is a champion in a way most of us would never understand. In 2014, she underwent treatment for a Stage III Hodgkin’s lymphoma, a cancer found in the body’s lymphatic system, which is part of the immune system. It causes cells in the lymphatic system to grow abnormally. As the cancer progresses, it hinders the body’s ability to fight infection. She has been in remission ever since. While undergoing treatment, she still continued to take classes and go through volleyball workouts in the University of Alabama.

Rivers will start her pro career at Beziers, in France next season.