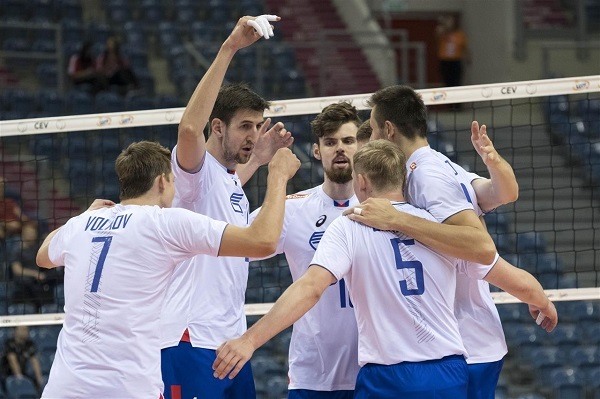 Earning free passes directly to the quarterfinals are: Serbia (A), Germany (B), Russia (C) and Belgium (D). All four teams won their groups with perfect 3-0 marks. Current Photo via CEV

All four pools wrapped up play on Sunday, setting up the playoffs, which begin on Wednesday. All eight matches were decided in sweeps.

Earning free passes directly to the quarterfinals are: Serbia (A), Germany (B), Russia (C) and Belgium (D). All four teams won their groups with perfect 3-0 marks.

The four playoff matches are: Bulgaria vs. Finland; France vs. Czech Republic; Poland vs. Slovenia; and Italy vs. Turkey.

Poland advanced with the second spot out of Pool A, while Finland took the third place spot. In Pool B, Italy was the runnerup, followed by the Czechs. Bulgaria wrapped up Pool C action in second, while Slovenia finished third. France was runnerup in Pool D followed by Turkey.

Estonia, Slovakia, Spain and the Netherlands were eliminated from the competition.

France are the defending chapions, while Sloveniva and Italy rounded out the podium in 2015.

Serbia hit at a 61 percent efficiency and won the block 9-5 in a sweep of Finland to seal its top placing in Pool A. The Serbians also edged their foes 42-36 in kills, but the Finnish outserved them 7-5.

Serbia broke open a 15-10 lead in Set 1 against Finland and stayed the course for a 25-20 win, clinched by a Dragan Stankovic kill. Atanasijevic pounded down the decisive kill in at 25-18 Set 2 decision. Finland did not go down easy, however, playing to a 16-14 lead in Set 3, before the teams knotted at 23. The Finnish had five set point chances and Serbia had three before finally ending the match at 34-32 on a Kovacevic putaway.

“It was much better than two days ago,” Serbian coach Nikola Grabic said. “We put lots of energy onto the court and our concentration was good. We expected a tough match and they served really well. But when they managed to do well in the second and third set we stayed steady and calm. I was very satisfied and all the players who came in gave something towards the victory. We had our chances to win the match (before we eventually did), but we made many mistakes with our serve.”

Renee Teppan scored a match-high 17 points, all on kills and Estonia outdid Poland in overall kills and effiency, but it was not enough to secure a victory.

The Estonians hit at a 49 percent clip to Poland’s 44 percent effort and put down 39 kills to their foes’ 35. The Polish won the block 10-4 and the serve 5-1 in the victory, while also having help from 26 Estonian miscues, including 18 service errors.

With a sellout crowd backing them, the Polish jumped ahead 8-6 and held the Estonians at bay the rest of the way. It was a one-point game at 20-19, but Mateusz Bieniek capped the 25-21 win for Poland. The teams played to a 16-all draw in Set 2, before Poland managed the victory on its third set point chance after an apparent ace by Bieniek was overturned on review on its second try. Set 3 was back and forth throughout through a 19-all tie, but an Estonian service error capped the night at 25-22.

“It was crucial for our confidence which I think we lacked at times,” Poland’s Bartosz Kurek said. “The two 3-0s we got in Gdansk are good and should make us believe more in ourselves to play better volleyball going forward. Now we go to Krakow for another battle and I hope it will not be the end. Our fans are amazing all the time and I hope they will come and cheer. The biggest court is to do the job on the court.”

Even without top scorer Gyorgy Grozer in the starting lineup, Germany made quick work of Slovakia, thanks in part to 31 Slovakian miscues in the match.

Twelve Slovakian errors and five German blocks lifted the team to a 25-18 Set 1 score. In Set 2, Germany squeaked past with one more kill (13-12) and one less error (10-9). The Germans had two set-point chance at 24-22, but had to outlast the Slovakians in extra points for the 26-24 win. Set 3 saw the teams trade points early with the largest margin coming at 14-12. later trailing 19-15, Slovakia scored three straight to knot the score at 23. A Slovakian hitting error eventually sealed the match at 25-23.

Italy hit at a 57 percent efficiency and had four players turn in double-digit point efforts in Sunday’s sweep.

Filippo Lanza racked up a match-high 19 points, with 17 kills, a block and an ace, while Oleg Antonov (13), Matteo Piano (12) and Luca Vettori (10) followed. Piano tallied a team-best three blocks, while Simone Giannelli served up five of the team’s nine aces.

Michal Finger paced the Czechs with 16 points, including 15 kills, while Donovan Dzavoronok added 13 points with eight kills, a team-leading four blocks and an ace.

Italy outdid the Czechs 54-34 in kills and served up nine aces, while allowing three. The Czech Republic did win the block 9-5.

The teams battled throughout Set 1 with the largest lead coming at 8-5 for the Czechs. In the end a Giannelli ace sealed the Italians’ extra point victory. The Czech Republic again took the early lead in Set 2, going up 12-8, but Italy answered with eight straight points to turn the tables. Trailing 24-21, the Czechs battled back to tie the score at 24. Italy had two more set point chances before Lanza finally clinched the 28-26 win. The final set was more of the same  as Italy led 21-18, only to see its foes catch up at 24. A Piano block at 26-24 was the final nail in the sweep.

“I am satisfied with the quality of my team’s play during this match,” Czech coach Michal Nekola said. “We got riskier at serving and it brought us some points. I guess the cold blood at the end of each set was missing and we have to work on that element to avoid such situations in the future.”

Bulgaria crushed Slovenia in all phases of the game, despite close scores in the first two sets.

Mitja Gasparini was the top scorer for Slovenia with nine points, including seven kills, in his first match back after missing two matches with injury. Tine Urnaut and Alen Pajenk chipped in six kills apiece.

Bulgaria owned a 16-14 lead midway through Set 1 and carried it on to a 24-19 edge, before staving off a Slovenian rally for the 25-22 win. Set 2 was a back and forth battle throughout with the Slovenians leading early as Gasparini starred and a Nikolov block accounting for the final point at 28-26. Bulgaria charged out to an 11-4 lead in Set 3 and never looked back, clinching the sweep on a Slovenian service error.

“I’m especially glad for today’s victory,” Bulgarian coach Plamen Konstantinov said. “We played well, our tactics was ok, we had a good block, because we read the play of Slovenian setter. We were better organised in the key moments of the game. We pushed pressure on opponents by strong services. I think we are physically prepared to play matches day after day. We need a better mentality and we can beat every participant of the European Championship.”

Maxim Mikhailov racked up 18 points, incluidng 14 kills as Russian dominated the net in a sweep of Spain.

The Russians outblocked their foes 9-3, tallied 14 more kills (43-29) and hit at a 56 percent efficiency, while holding Spain to a 35 percent effort. Russia also won the serve 6-5.

Russia turned a slim advantage into a late 23-17 edge with help from Mikhailov and a strong block. A Maxim Zhigalov ace ended the stanza. In Set 2, Russia cruised to an 8-4 lead and on to a 25-13 win. The teams were level at 18 in Set 3, before Spain went up by two at 21-19 on a Juan Manuel Gonzalez ace. Down 23-21, Russia managed four straight points, including Dmitri Volkov‘s set ending kill, to escape with the sweep.

Mikhailov led all scorers with 18 points, while Volkov chalked up 10 kills, two aces and a block to finish with 13. Ilia Vlasov put up a team-best three blocks.

Belgium won via sweep with identical 25-21 scores with help from 12 blocks, seven aces and a 51 percent hitting efficiency.

Nimir Abdel-Aziz notched a match-high 17 points for the Dutch, including 16 kills, while Tomas Koelewijn scored 10 points, with eight kills.

The Netherlands led for much of the first set, only to see Belgium catch up at 18-all and carry the momentum to the win. The Dutch boasted a 10-6 lead in Set 2, which saw Belgium’s middle blocker Pieter Verhees leave the match with an ankle injury. Van De Velde took over the spot and quickly turned in a block and an ace to knot the score at 11. Belgium built the lead to 20-17 en route to the victory. In Set 3, the Belgian led from the first technical timeout after stealing away an 8-7 lead and boosting it to 21-17 before closing out the sweep.

“At the moment I can’t yet realize that we are already qualified for the quarterfinals,” Belgian coach Vital Heynen said. “We played very well and a stable game today. I changed players throughout the match, my athletes played like one team and the guys from the bench made the difference, allowing us to qualify to the quarterfinals.”

Although the match ended in a sweep for France, it was close throughout.

France benefitted from two more Turkish miscues (25-23) and four more aces (6-2) in the victory. The teams tied in blocks with five apiece and were separated by just one kill (39-38 for France).

The French took advantage of Turkish errors en route to a 13-9 lead. Turkey eventually caught up at 17-all and the teams traded points until France came away with the win on a Julien Lyneel kill. France again started quickly in Set 2, leading 8-6, but the Turkish scored five of the next seven to go ahead 11-10. A back and forth battle including several long rallies eventually ended at 25-23 in favor of the French. The finale saw France boast a 22-20 lead, but a timeout and an ace by Gohkan Gokgoz knotted the score. A hitting error, however, clinched the match for France three points later.

“It is really nice to win in straight sets for a change and win second place in pool D this way,” France’s Thibault Rossard said. “All the sets were really dynamic and quite balanced, fortunately we managed to stay ahead in those tight last moments of sets.”

Trevor Clevenot led France with 12 points, including a team-best nine kills and three aces. Lyneel followed with nine points on eight kills and a block.

Turkey’s Baturalp Burak Gungor paced the Turkish side with a match-high 15 points, including 13 kills and a team-leading two blocks. Metin Toy chipped in 10 points, all on kills.