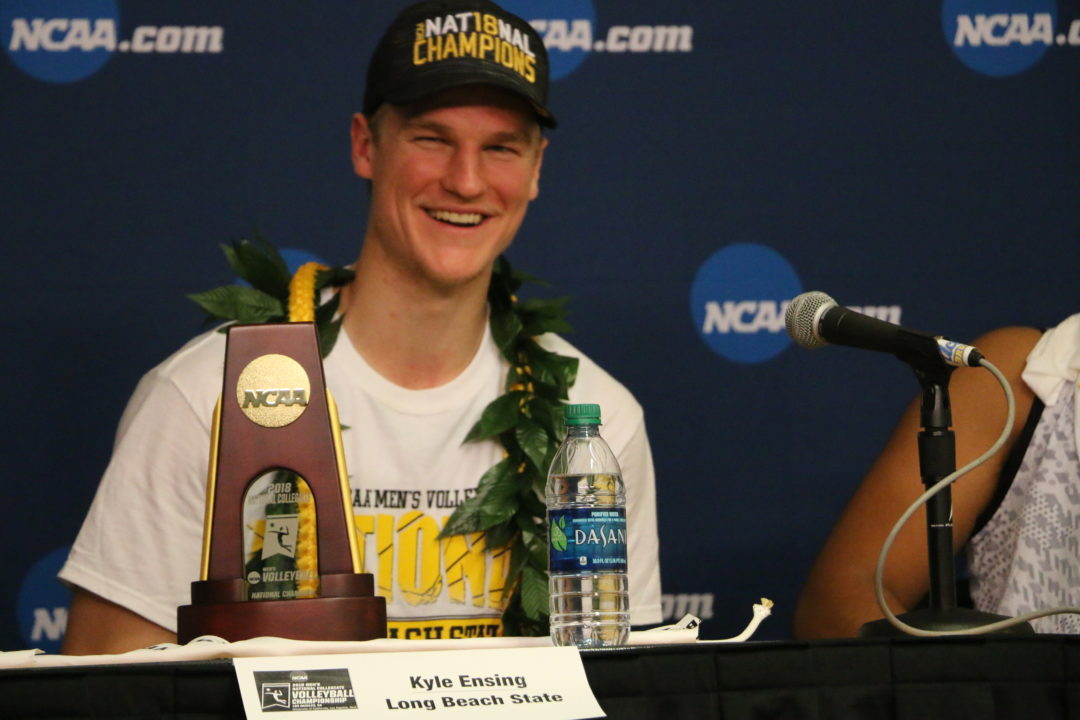 After helping his team to an NCAA Championship earlier this month, Kyle Ensing will travel to Ningbo, China to open the 2018 FIVB Men's Volleyball Nations League this weekend. Archive Photo via Anne Lepesant

Long Beach State opposite Kyle Ensing will make his U.S. Senior National Team debut this weekend in Ningbo, China, for the first week of play in the inaugural FIVB Men’s Volleyball nations League.

Ensing, who will pair with Ben Patch at the opposite position, is the only debutante on this weekend’s 14-man roster for the United States. The other 13 players have all previously been on a U.S. international team.

The 2018 VolleyMob Second Team All-American is one of three players who just finished their junior seasons of collegiate volleyball who will be on the roster, along with his Long Beach State teammate TJ DeFalco and Loyola middle blocker Jeff Jendryk.

The biggest absence from the roster is starting setter Micah Christenson, whose professional season ran into mid-May with Lube Volley as they advanced to the gold medal match of the European Champions League. Kawika Shoji will slide in as the starter, with 23-year old Jonah Seif, who plays professionally in Poland for MKS Bedzin, joining the roster.  Seif, a former UCSB All-American, was the American captain at the 2017 Pan American Cup.

Returning to the lineup is Max Holt, who sat out last year’s World League, to the middle. His return, along with some opportunities for big-time experience for Jendryk and Taylor Averill last summer, give the Americans strength in the middle to complement their young hitting corps (no Aaron Russell or Matt Anderson, who were also Champions League participant).

The Americans will open their tournament against Argentina on Friday, before playing Bulgaria and the hosts China to finish the weekend. The United States, who placed 4th in last year’s World League, will be heavily-favored in all 3 matches against very young teams.