Loyola Rallies from Down 0-2 to Upset No. 4 Ohio State in Five 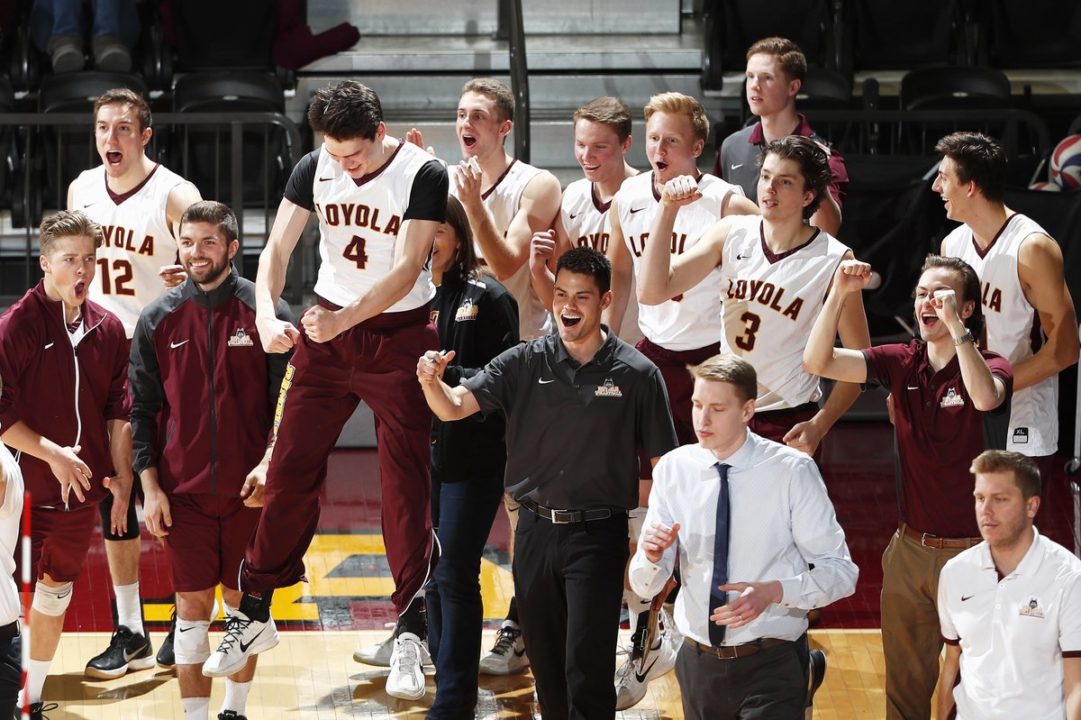 After falling behind 2-0 in the match, No. 6 Loyola utilized the home court advantage and rallied to win three straight to take a five setter from No. 4 Ohio State on Saturday night. Current Photo via Loyola Athletics

After falling behind 2-0 in the match, No. 6 Loyola utilized the home court advantage and rallied to win three straight to take the match from No. 4 Ohio State.

In the decisive fifth set, Ohio State scored three of the first four points and led 8-5 at the changeover. Three Rambler miscues and two Hanes kills gave the Buckeyes the three-point lead. Loyola tied it up at 10 on a Ricky Gevis ace and kills by three different players. The teams split the next 10 points, with Ohio State getting two cracks at the match at 14-13 and 15-14 after Rambler errors. A Gevis kill knotted it up at 15 and a hitting error and Jake Freeman ace stole away the 17-15 win and sealed the upset.

Set 1 featured seven ties, last at 17-all, before Ohio State broke away with a 7-1 run. Szerszen downed three kills and Sanil Thomas served up an ace in the rally, which made it 24-18 Buckeyes. A hitting error and a Jamison putaway kept the Ramblers in the set, but Hervoir nixed any further comeback hopes with a putaway. Szerszen notched seven kills in the stanza.

Ohio State carried the momentum into Set 2, racing out to a 12-6 advantage. Three kills and an ace by Hanes, perfect serves by Thomas and Blake Leeson and three Loyola errors gave the Buckeyes the six-point edge. OSU boosted its lead from five (14-9) to 10 (21-11) with a 7-2 run. Hanes notched two kills and an ace and Szerszen added a putaway and an ace in the Buckeye surge. Loyola responded with four of the next five points, including a Jamison ace and two OSU service errors. In the end, it was two Rambler miscues and a Szerszen kill that clinched the 25-15 win with a final 3-0 run.

Loyola built a five-point advantage early in Set 3 at 10-5 with two kills and an ace by Jendryk and two Mahan putaways. Ohio State narrowed the gap to two at 10-8 after back to back ace by Nick Laffin, but would get no closer. A solo stuff by Jamison put the Ramblers up five at 18-13 and an ace by the senior pushed the lad to six at 21-15.  A service error gave Loyola a set-point try at 24-19 and a Gevis kill kept the match going with a 25-21 Rambler victory.

The Ramblers led by as a many as five in Set 4, but the set was far from a runaway. Trailing 9-4 after a 5-0 Loyola run, Ohio State began to chip away, eventually knotting the score at 11 before surging ahead by four at 17-13. The 13-4 run included three kills each by Hanes and Szerszen kills as well as two Laffin aces. Loyola worked its way back to a tie at 19 including back-to-back aces by Zolg. A Mahan kill and Kyler Kotsakis ace lifted it to 23-22 Ramblers. Hanes tied it up, but a Jendryk putaway and Hanes hitting error gave Loyola the 25-23 win and sent things to a decisive fifth set.