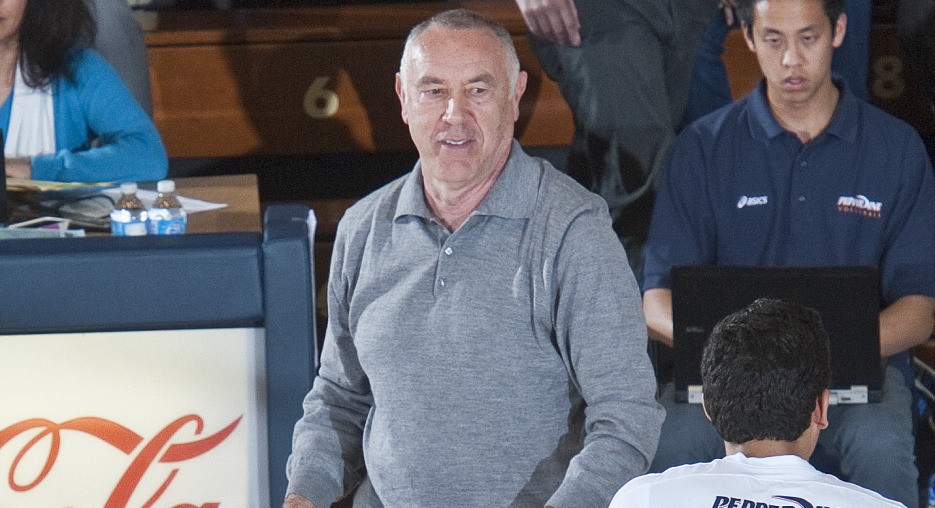 In honor of the tremendous career of head coach emeritus Marv Dunphy, Pepperdine will be hosting ‘Marv Dunphy Night,’ as well as a dedication ceremony for the Marv Dunphy Volleyball Court before the match.  The dedication will take place before first serve at 5:45 p.m. in Firestone Fieldhouse.  The dedication and match will stream live with WaveCasts.

Special edition ‘Marv Dunphy’ volleyball hats will be a giveaway to the first 1,500 fans in attendance.  Fans can share their Marvisms, memories and pictures from the night and from history by using the hashtag #MarvsArmy.

COVERAGE/SOCIAL MEDIA – Can’t make it out to the match? No problem! PepperdineWaves.com offers a wide variety of FREE options to follow along with all your favorite teams.  WaveCasts broadcasts all home matches for free on your computer or mobile device.  Veteran play-by-play announcer Al Epstein will once again serve as the voice of Pepperdine volleyball in 2018.  Links to any available live stats, video and audio can always be found by clicking on a particular event on the men’s volleyball schedule page at PepperdineWaves.com.

UP NEXT – After the match on Saturday, the Waves will hit the road for the team’s first road matches of the 2018 campaign.  Pepperdine treks to Fairfax, Va. to compete in the Uvaldo Acosta Invitational on Jan. 26 and 27 against both Ball State and tournament-host George Mason.

THE NO. 10 WAVES – Pepperdine opened the 2018 season with a 3-0 sweep over Cal Lutheran in Firestone Fieldhouse, before falling in a tough battle to 5th-ranked UC Irvine the following week.  Collectively, the Waves post 13.43 kills/set on a .290 hitting percentage, while adding 12.43 assists/set, 2.29 aces/set, 7.86 digs/set and 2.50 blocks/set after the first match of the season.  As a team, the Waves ranks fourth nationally in aces/set and kills/set, sixth in assists/set and eighth in blocks/set.

The Waves have seven players ranked 28-separate times throughout eight categories.  Alex Harthaller leads the nation with 1.33 aces/set, while also ranking 2nd with 5.33 points/set, 11th with 3.67 kills/set, 14th with 8.17 attacks/set, 54th with a 0.286 hitting percentage, 72nd with 0.67 blocks/set and 96th with 1.33 digs/set.  Robert Mullahey ranks 2nd nationally with 11.43 assists/set and also ranks in three other categories.

LAST WEEK – The Waves put up a solid four-set fight against 5th-ranked UC Irvine at home last week, falling just short with a 29-27 final set loss.  The Waves were tied heading into the third, posting 21-25, 25-16, 19-25 set scores until the final set.  Pepperdine posted 53 kills on a .226 success rate, while adding eight aces, 32 digs and 7.0 blocks.  The opposition was good for 52 kills on a .281 output, as well as one ace, 41 digs and 10.5 blocks.  Alex Harthallerhighlighted for the Waves with a career-high five aces and 18 kills on a .317 success rate.  Colby Harriman added 14 smashes, while Clay Carr and Noah Dyer led with four blocks apiece.  Robert Mullahey led the team in playmaking duties with 46 assists and Weston Barnes tabbed nine digs.

OPPONENT NOTES: UC SANTA BARBARA – The Waves hold a 69-34 all-time record against the Gauchos, including a 30-22 record at home and 36-10 record on the road.  The team’s first faced off in 1971 when UCSB took a 3-1 win over Pepperdine at home.  The Waves took home their first win over the Gauchos in 1973 with a five-set bout on the road.  Pepperdine went on a series of winning streaks with either seven or eight wins from 1977-2006 with single-game losses in between mostly.  The longest winning streak the Waves posted was 10-straight matches from 2006-10.  Last season, the two teams faced off once, with Pepperdine collecting a 3-1 win at home.  This season, the Gauchos have gone 2-1 overall.

NEW MPSF – Prior to the 2018 season, the Mountain Pacific Sports Federation split into two separate conference leagues (MPSF and Big West).  Pepperdine, along with Brigham Young, Stanford, UCLA and USC remained in the MPSF.  New additions Concordia-Irvine and Grand Canyon also joined the conference in 2018 to make it a seven-team league.

THE HUNT IS ON – The 2018 campaign marks the premier season for David Hunt at the helm of the Waves after he was elevated to the position in July, 2017.  He won his first-ever match as head coach of the Waves on January 7, 2018 at Firestone Fieldhouse with a 3-0 sweep over Cal Lutheran.  Hunt has been with the Pepperdine men’s volleyball program for the past 10 seasons beginning in 2007 as a video coordinator and volunteer assistant.  He was elevated to assistant in 2010 and associate head coach in 2014, before taking over the leadership role.  During his time with the Waves, Hunt has earned national acclaim as an assistant with three American Volleyball Coaches Association Thirty Under 30 Awards (2010, 2016, 2017).  While Hunt had served under former head coach Marv Dunphy, the Waves produced a 160-104 overall record for a .606 winning percentage*.  In the summer of 2016, Hunt once again joined the national coaching ranks with the U.S. Women’s National Team and helped lead Team USA to a bronze medal finish in the 2016 Olympic Games.  He first earned a spot on the sideline in 2014 and has continued to excel in a leadership position under legendary coach Karch Kiraly.

WE’RE GOOD HERE: MARV DUNPHY – Widely recognized as one of the game’s premier coaches, Dr. Marv Dunphy directed Pepperdine to four NCAA men’s volleyball titles and concluded his 34th and final season as the Waves’ head coach in 2016-17.  He is still involved with the program and listed as head coach emeritus for the 2017-18 campaign. He directed Pepperdine to four NCAA championships, each in a different decade (1978, 1985, 1992, 2005). He was the 2005 National Coach of the Year and is a three-time MPSF Coach of the Year. He ended his head coaching career with a 612-277 overall record and a .688 winning percentage.

VOLLEYBALL HISTORY – Pepperdine has won five NCAA men’s volleyball championships, second only to UCLA. The Waves have won the MPSF Tournament three times and have won or shared 10 regular-season conference titles. Pepperdine has won either an MPSF regular-season or tournament title (or both) in six of the last 17 seasons. The Waves have finished in the top six in the final AVCA poll in 17 of the last 21 seasons. Pepperdine student-athletes have won national player of the year honors nine times and All-American accolades 82 times. A Pepperdine alum has competed at the Olympics every time since 1984 (Sean Rooney won gold in 2008).

ABOUT PEPPERDINE – Pepperdine boasts a one-of-a-kind athletic department with unprecedented success for a school of its size. The Waves have won NCAA Division I Championships in five different men’s sports — one of just 17 schools to have accomplished this feat — and nine overall. Of this elite group, Pepperdine has the smallest undergraduate enrollment, is the only school without football and is the only university that has not been affiliated with a “major” conference. The Waves have won a total of 25 team or individual national championships in their history. Pepperdine has also earned the Division I-AAA All-Sports Trophy, an award based on postseason success that’s given to the top non-football school, three times (most recently in 2011-12). Located in scenic Malibu, Calif., the university overlooks the Pacific Ocean and its campus and athletic facilities are regularly voted among the nation’s most beautiful.  Pepperdine, which is affiliated with the Church of Christ, ranks No. 50 overall on U.S. News and World Report’s list of America’s best colleges.