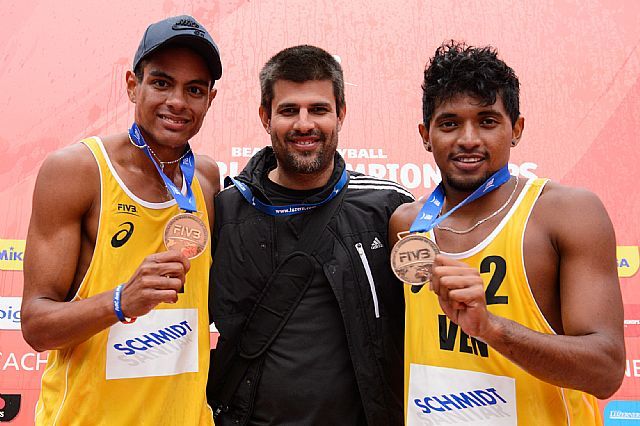 Hernandez is leaving the Royal Spanish Volleyball Federation and returns home as the Venezuelan beach volleyball coach in preparation for Tokyo 2020 Olympics.  Current Photo via FIVB

Mauro Hernandez will return to his home country of Venezuela as head coach for beach volleyball heading toward the Tokyo 2020 Olympics. His return comes as part of the program’s rebuilding initiative following an unsuccessful attempt during the qualifying tournament for the Rio Games last summer. Hernandez was the Former coach of the Permanent Concentration of Technique of beach volleyball for the Royal Spanish Volleyball Federation.

A four-time Venezuelan Coach of the Year Award recipient, Hernandez has lead the Venezuelan duos team to the London Olympics as well as coaching duos to the silver medal in the 2015 Youth Games, the gold medal in the South American Games in 2014, and the bronze medal in the 2014 World Under 19 games.

The Venezuelan team under previous coach Vincenzo Nacci has enjoyed only limited success. The team’s standing increased from the No.42 in the world to No. 21  but it was not enough to put the team in the Olympic limelight as the team suffered a loss at all seven matches at the Tokyo Qualifiers last year.

With the announcement of Mauro Hernandez as coach by the Venezuelan Volleyball Federation President, Judith Rodriguez, there has been a revitalized hope for the future of the team.

“Mauro Hernandez is a coach who knows how to win, as he had a successful coaching career in beach volleyball,” Rodriguez said. “He has led our national team to win a silver medal at the Nanjing 2014 Youth Olympic Games and the bronze medal at the FIVB Beach Volleyball Men’s U21 World Championship.”