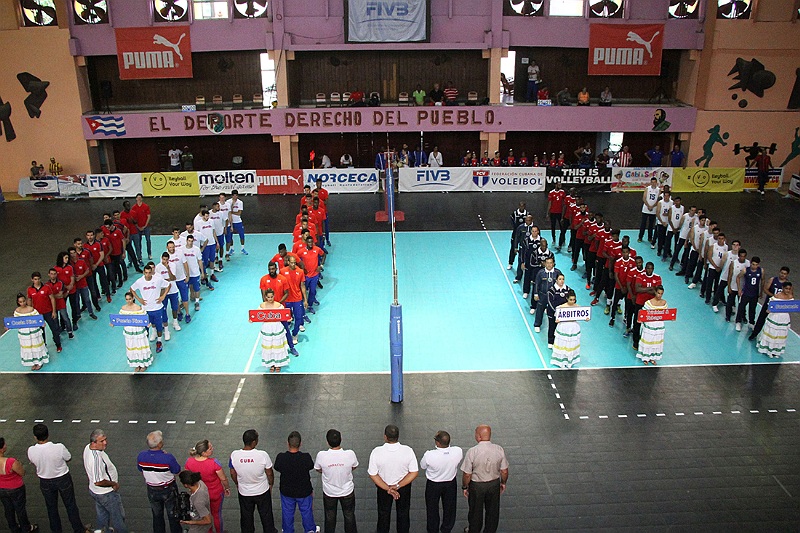 The 2018 Men NORCECA Challenge Cup is underway, as host-nation Cuba had their opening match come against Guatemala while Puerto Rico and Trinidad & Tobago squared off. The event’s format, standings and results from the day with some analysis can all be seen below.

The top challenger to Cuba in this event would appear to be Puerto Rico, who looked solid in their first action of the tournament with a sweep of Trinidad & Tobago. The serve, both in sending it and receiving it, was on the side of Puerto Rico, which led to the quick match that featured a back-and-forth third and final set.

Leading the way in the match for Puerto Rico offensively though was opposite Pedro Rosario, who notched a match-best 12 points. Pablo Guzman added nine, which was enough to overcome a strong showing from Trinidad & Tobago opposite Ryan Stewart and his 10 points.

Puerto Rican captain Ramón Burgos: “It is the first time we played together as a group and we did a good job, we know there are many things to improve, but the format of the tournament suits us because our last game will be the against Cuba, I trust that we go from less to more and prepare for that important clash with the locals.”

Trinidad & Tobago captain Ryan Stewart: “We did not start at the maximum of our abilities but we entered determinedly and gradually we went up, without thinking that we could not resist and that allowed us in the last set to be up to par with our rivals. We will feel better and even though it is not our main commitment of the season, we will do our best”.

The favorites in this event, both in world ranking and in home fan support, made quick work of their opening match, downing Guatemala by a total of 75-42. With four of the five teams from round robin action making it into the semifinals, Cuba’s five points from the victory might be enough to advance them on, with another win likely clinching things – although they have higher aspirations.

The home side had power at the top and balance throughout, led by opposite Miguel David Gutierrez (12 points) and outside hitter Osniel Melgarejo (10 points). In the losing effort, Guatemala saw a team-best six points coming from opposite Leonel Aragon.

Nicolás Vives, Head Coach of Cuba: “That was the strategy, blocking the diagonal as we also made some important changes to make it possible for everyone to play because it is their first match as a team. They also have the option to develop, we want the reserves to play and be ready for any complication, and because there may still be some changes in the squad for the Central American and Caribbean Games of Barranquilla.”

Lucas Mora, Head Coach of Guatemala: “The hosts have improved a lot, their level is impressive for this type of event in the area and we have a lot to gain and little to lose, but my boys did not play as we would have liked, a little more performance, they were confused and did not trust in them, but I hope that starting tomorrow they will improve.”