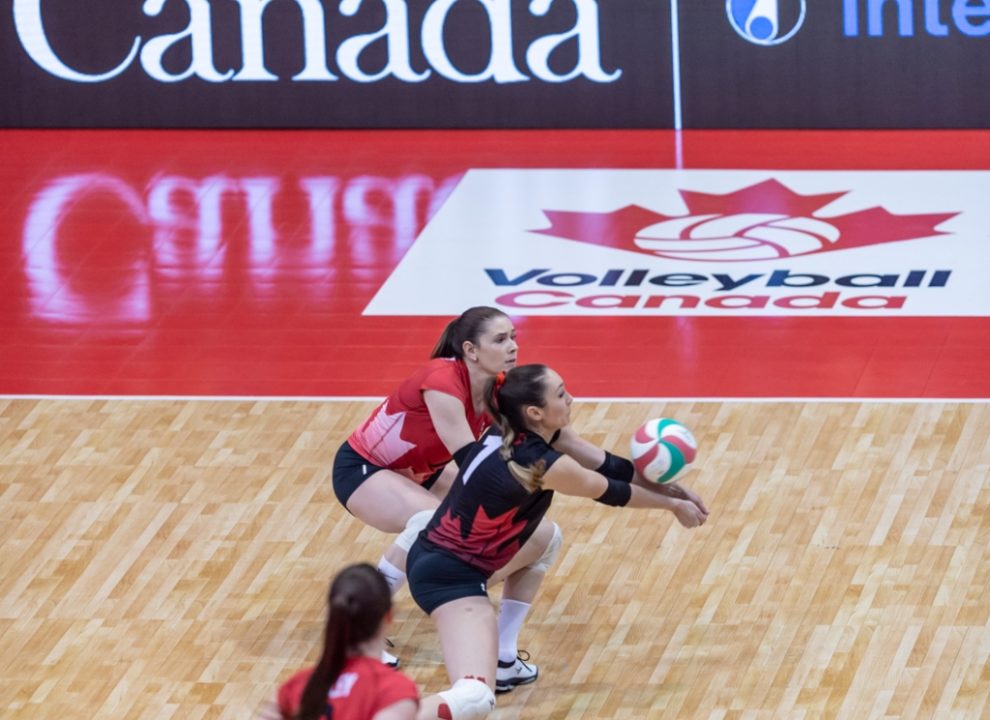 Canada and Puerto Rico both earned sweeps to set up a meeting for Gold; NORCECA Women's Challenge Cup (Day 3). Archive Photo via NORCECA

Pool play came to a close on day three of the 2018 NORCECA Women’s Challenge Cup, as the five team tournament – that was initially six until Costa Rica withdrew – now has just two matches to determine the placements of all the teams. Specifically, the championship match will be between host-nation Canada and the world’s highest ranked team in the event in Puerto Rico.

That was all set up by both countries earning sweep victories over their counterparts to win their respected Pools. Now, the countries will clash for gold and a berth in the FIVB Volleyball Women’s Challengers Cup that provides a chance at making the 2019 Volleyball Nations League.

In a rematch of day one – due to Costa Rica’s withdrawal – Canada just needed a better point differential or to win at least one set. They did more than enough by winning all three, to improve to 2-0 in the event. That didn’t appear to be a foregone conclusion in the first, as Channon Thompson (14 points) led the way for Trinidad & Tobago. However, the Canadian side’s dynamic duo of former USC Trojan Alicia Ogoms (16 points) and recent Michigan State graduate Autumn Bailey (13 points) overcame it to the tune of a sweep.

Next up, Trinidad & Tobago is sent to the third place match, where they are a win away from earning a bronze medal. For Canada, they get to play host to the top ranked team in the event in Puerto Rico, with not just a gold medal and first place on the line, but also a spot in the FIVB Volleyball Women’s Challengers Cup. The importance of that is it is another step toward qualifying for the 2019 Volleyball Nations League.

Canada team captain Kyla Richey: “It’s always good to win 3-0… we had a little bit of a rocky start, but we had a few new players on the court, and it was Autumn Bailey’s first international match.  It just takes time to settle in. We’ve played Puerto Rico a few times in the past, and it’s what we’ve been training for all week. We’ll scout them tonight and early tomorrow to figure out our game plan.”

Trinidad & Tobago team captain Renele Forde: “Today we tried to work out some things in our rotation, we had people playing different positions – I’m playing both middle and setter which is new for me. We’re just adjusting to playing together since this is our first tournament and actual practices together. Coming into the game we just expected to compete as best as we could. I’m happy with the result, I think we fought well and things went smoothly. We’re looking forward to the game against Cuba tomorrow and we’re looking to get third place.”

Favored Puerto Rico slowly wore down a stiff challenge from Cuba to earn the sweep. The biggest difference was the balance of Puerto Rico, who had five players reach eight or more points compared to just two for Cuba. Leading that charge was former Arkansas star Pilar Victoria (12 points), who was the best blocker (five points off of blocks) in the match. Cuba didn’t have quite the block and did get nine kills from both Sulian Matienzo Linares and Diaris Perez Ramos. However, the balance and nine kills to match from Shirley Ferrer were enough for Puerto Rico to sweep.

The win, in a de facto Pool B championship match, sends Puerto Rico to the first-place match after winning all six of their sets. They’ll take on Canada in the match, where they have the higher ranked team but will battle the road crowd for a chance at the FIVB Volleyball Women’s Challengers Cup and another step along the path to qualification at the 2019 Volleyball Nations League. In Cuba‘s case, they are sent to the third-place match to compete for a bronze medal and a strong finish to the event.

Puerto Rico head coach Javier Gaspar: “I knew it was going to be a tough match against a tough opponent like Cuba, so it went as I expected. I think our players are very disciplined with what we wanted to do especially with our blocking defense. I think that was they key because I know we’re going to pass well and that our offense will be there most of the time, but there’s some things that we need to fine tune on our offense when we are on transition, location of the setting, the speed of the ball, but overall we did an excellent job tonight and I think that was the difference. We were able to contain their powerful hitters on the outside.”

Cuba head coach Wilfredo Robinson Pupo: “We expected a game like this – Puerto Rico came out strong with a really good defense and we couldn’t do much. Tomorrow, for the bronze medal match, we will have a different tactical plan because the game will be a lot different.  We expect our girls to give everything they have to the game.”