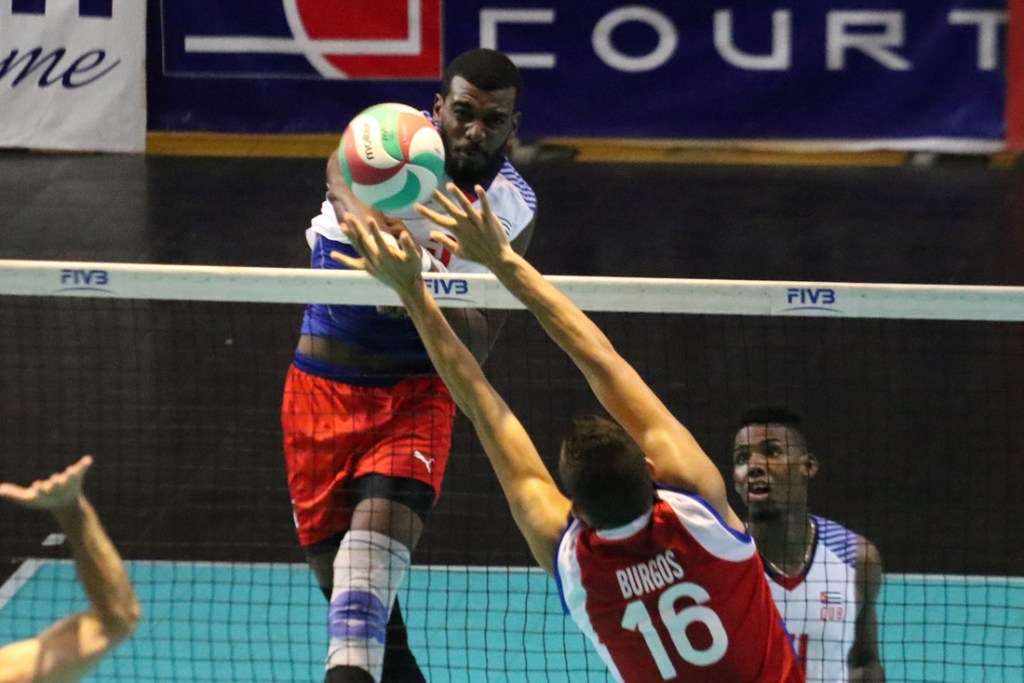 Cuba swept Puerto Rico in a meeting of the top two teams while Guatemala got in the win column. Archive Photo via NORCECA

The 2018 Men NORCECA Challenge Cup is underway, as day four is now in the books. The event’s format, standings and results from the day with some analysis can all be seen below.

Costa Rica came up with the early set as they looked to garner their first win, but then crumbled apart as Guatemala dominated the final three sets by a combined score of 75-47. That puts Costa Rica in a tough position to advance on, with the last place team in pool play not making the elimination round.

Leading the way for the winning side was Carlos Lopez, who had a match-high 23 points and was unstoppable. Wagner Chacon and middle blocker Brandon Chinchilla also combined for 23 more points. The three-headed monster was more than enough to overcome Costa Rica, who did see Gilberth Solano notch 15 points, but with no other player reaching double-digits.

Guatemalan captain Carlos Lopez: “In the initial set we lacked concentration, but we made several changes to adjust and when we entered the next one we recovered and maintained the rhythm to win. Our goal at this tournament is to prepare us for Barranquilla.”

Costa Rican captain Andres Araya: “Although we have a short process of preparation and this almost entirely a new selection, but our general feeling is one of joy, we showed in the first set that we can achieve more because we resisted Guatemala consolidated by its experience.”

Cuba and Puerto Rico set up a clash of undefeated teams, but Cuba proved to be the stronger side with a sweep victory. Still, as the top two teams in the pool, there’s a good chance these two meet again in the championship match.

Leading the way for Cuba was a quartet of double-digit scorers in Miguel Ángel López (14 points), Liván Osoria (12 points), Miguel David Gutiérrez (12 points) and Osniel Melgarejo (10 points). Eddie Rivera did total 11 points for Puerto Rico, but was the only one to reach double figures as his team couldn’t match the Cuban’ balance.

Cuban captain Liván Osoria: “We went from less to more, the goal was fulfilled and tomorrow we win to Costa Rica we have the opportunity to go to another tournament that allows us more preparation for the Central American and Caribbean Games of Barranquilla , where we aim to conquer the gold, playing more than 20 games the six that we were in professional leagues has contributed to having more confidence, to forgetting about the public and its pressure, in short, it has been vital.”

Puerto Rico head coach Manuel Acevedo: “Cuba reduced the number of errors that characterized them and tightened very well after point 20. In the three sets we played fairly even, but in the end the experience of them and something paradoxical, was supposed that we were the defensive team, on the other hand they did it well and we got complicated in the transition, we were not effective in something that we depend on that, to lift balls and the passes were extended, we could not and that is why they prevailed. Cuba is a team with and I am pleased with the balance of the tournament and the way the team played, the illusion was the ticket, but we came to this meeting with the possibility and it was fought.”