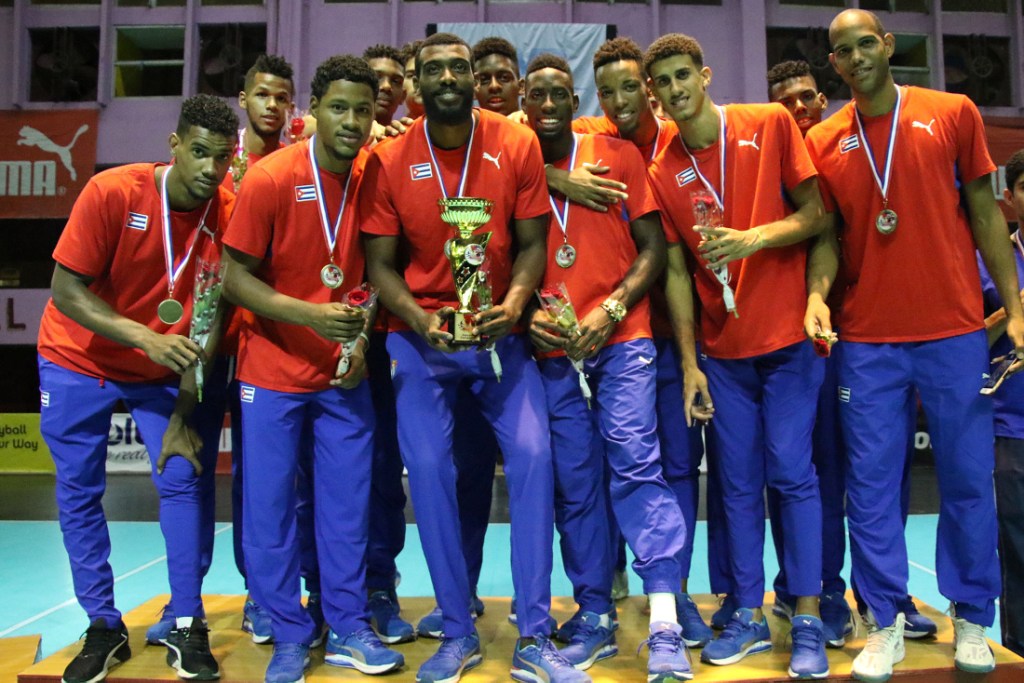 Cuba finished off an undefeated tournament to win the 2018 Men NORCECA Challenge Cup and earn a bid to the FIVB. Archive Photo via NORCECA

The 2018 Men NORCECA Challenge Cup is officially over, as day five is now in the books. Cuba dominated the competition en route to a victory in the round-robin style play. The event’s format, standings and results from the day with some analysis can all be seen below.

In what worked out to be a third-place match, Guatemala came overcame a first-set loss with a wild second set victory that pushed them to a 3-1 win. That second set was so intense that losing it for Trinidad & Tobago, who finished fourth, likely took some air out of their sails.

Leading the way for Guatemala was Carlos Lopez and his team-best 20 points. Wagner Chacon logged nine, but no other player reached double figures for the side. In the losing effort, Ryan Stewart (24 points) again was fantastic for Trinidad & Tobago, but his team fell just short.

Guatemalan captain Carlos Lopez: “They form a very strong team, but today if we concentrate and work as a team, it was the important thing and we fulfilled the goal we set for ourselves, third place and we are happy, motivated yet more to continue doing a good job, because we have the serious commitment of the Central American and Caribbean Games of Barranquilla.”

Ryan Stewart of Trinidad & Tobago: “We had been working well until the middle of the second set, but we lost focus and made many mistakes, in addition the player who replaced our setter who was injured in the previous game was also injured and that new change was very difficult. We did a good job, but I think we reacted very late.”

Finishing things off in front of a home crowd, Cuba ended all the formalities and earned their NORCECA Challenger Cup victory by ending the tournament unbeaten. The latest chapter in the saga was a sweep of Costa Rica, in which things were never really in doubt.

Spearheading the Cuban success was Miguel Angel Lopez and his 15 points. Marlon Yang added 11, with more of a spread-out and balanced attack for Cuba to overcome a strong effort from Gilberth Solano (13 points) of Guatemala.

Technical director of Cuba, Nicolás Vives: “We have not played much as a team and we need to do it with anybody, it is important the cohesion of the group, the combination of receipt, pass and attack. In general my team is young and the new players a lot more and they require a lot of play. Each tournament is important and we will make the same use of the World Final because we are determined to win the gold at the Central American and Caribbean Games.”

Costa Rican head coach Andres Araya: “It was a very nice experience for the group with little international experience, we played as we wanted to do it in the whole tournament and we could not, without pressure, with the desire to win no matter who we were facing. I was proud to do it in front of a world power and do it well, to demand that they do their best to win, we are very happy, we loved the tournament and the Cuban people, it has been all beautiful.”