One of the challenging things about being a fan on international volleyball is trying to figure out when matches are... Current Photo via FIVB

One of the challenging things about being a fan on international volleyball is trying to figure out when matches are going to played overseas and if you watch the matches live, you have to figure out the time difference.

With the FIVB Volleyball Men’s World Championship being played in Italy and Bulgaria in September, depending on where you are at in the world, you may be spending your waking hours fighting sleep or having lunch while watching your team play. Additionally each country is one hour different from the other, making it a little more complicated.

The Men’s World Championship has three rounds before the semifinal and finals. In the First Round, each pool will play three matches per day in the host cities of Rome (opening match) and Florence, Italy (Pool A), Ruse, Bulgaria (Pool B), Bari, Italy (Pool C) and Varna, Bulgaria (Pool D). Matches will be played for the First Round from September 9th (Sunday in Italy and Bulgaria) to September 18th (Tuesday). Per FIVB regulations, the official start times are set before the tournament and for the First Round they are displayed from Italy (Central European Summer Time +2 hours UTC) or Bulgaria (Eastern European Summer Time +3 hours UTC), in the middle of the table. On the far right of the table, you have Melbourne, Australia (Australian Eastern Standard Time +10 hours UTC) and on the far left the list finishes with Los Angeles (Pacific Daylight Time, -7 hours UTC), the earliest of the time zones in the list.

The opening matches will be played on September 9th and have their own special time schedule.

The remaining first round matches have the following time table. Due to opening match, matches played on September 12th, will have a slightly different time, than from those played for the rest of the first round and they have been noted in the table. 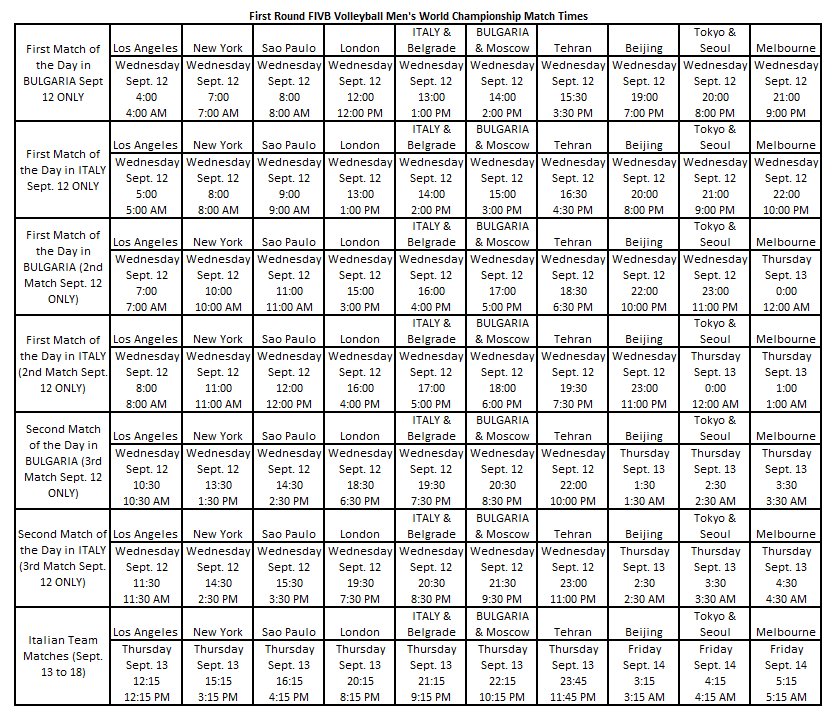 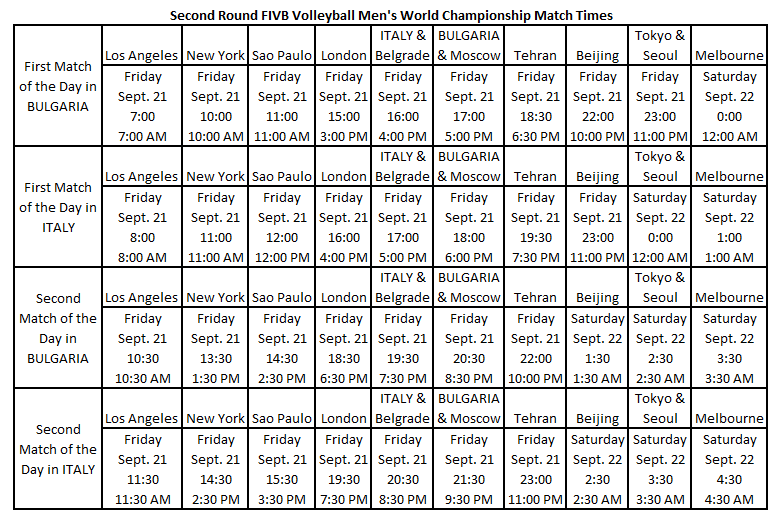 The Third Round is split into two pools of three, with the top teams from each pool and the two best second place teams in the Second Round advancing to the Third Round. In the Third Round, there will be one match played per day per pool for two matches per day total. These matches will be place in Turin, Italy start September 26th (Wednesday) and end on September 28th (Friday).

After the Third Round, the top two teams in each pool will advance to the semifinals. On September 29th (Saturday), there will be two semifinal matches played. If Italy advances to the semifinal, I wonder if the matches will be moved around to put the Italian team in prime time for better ratings.

Lastly on September 30th (Sunday), the Championship and 3rd place matches will be played.