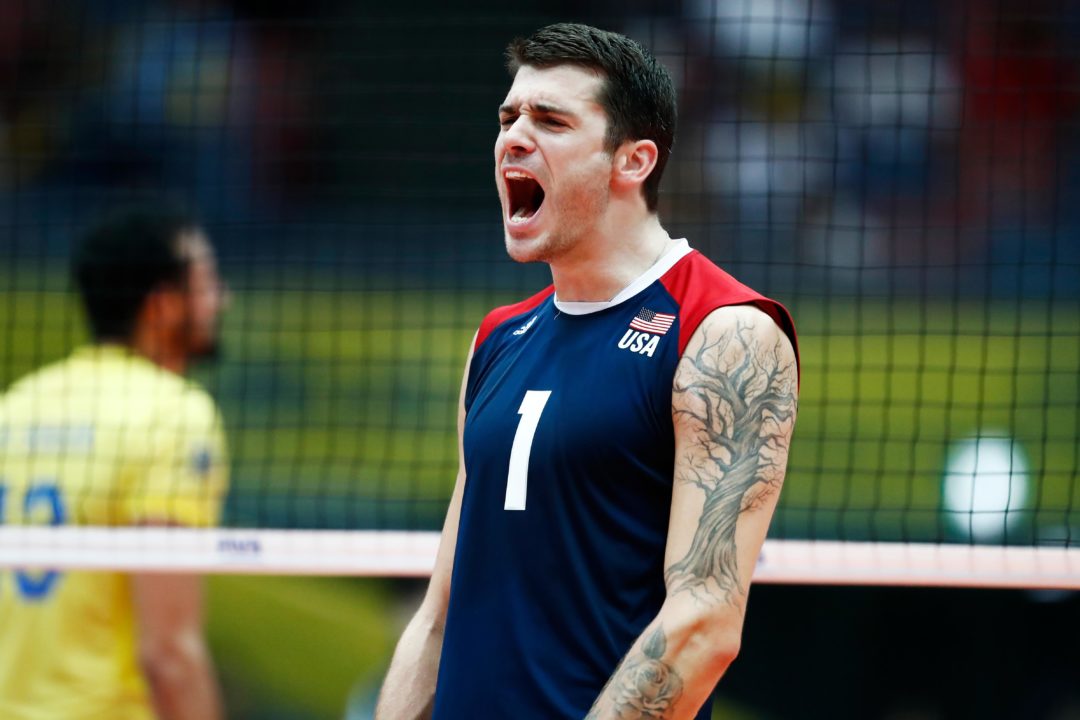 U.S. hitter Matt Anderson will represent the U.S. National Team for the first time this summer in week 2 in Brazil. Archive Photo via FIVB

The Americans will be getting 3 of their star players back for week 2 of the 2018 FIVB Men’s Volleyball Nations League as the team heads to Goiania, Brazil to face Japan (2-1), South Korea (0-3), and Brazil (2-1). Matt Anderson, Micah Christenson, and Aaron Russell, all of whom sat out last week while coming on a short turnaround from the 2018 CEV European Champions League, will rejoin the team in Brazil.

Seif, the likely heir to the backup setter role when 30-year old Kawika Shoji is done with the National Team, saw action in all 3 matches in the first week of play. Sander was the teams top scorer, and the tournament’s 3rd-best scorer, in week 1 with 55 points. USA Volleyball says that Sander returned home for “personal reasons;” his wife is expected to give birth in the coming days.

Christenson is the Americans’ usual starting setter – he played in the Champions League Final 4 with Civitanova. Russell, unlike many of his Perugia teammates, did not participate in the first week of the Nations League. He missed last year’s World League while rehabbing an ankle injury, but returned in time for the late-summer tournaments, including the Grand Champions Cup.

Anderson played in the Champions League for the winners Zenit Kazan. The veteran 31-year old hitter was the best opposite at last year’s Grand Champion Cup and was the United States’ Player of the Year for 4 straight years from 2012-2015. He’ll likely start over Ben Patch at the opposite position, though his preferred professional position is outside hitter – where the Americans are deeper and more experienced than they are at the opposite.

Anderson and Russell were the United States’ top two scorers at last year’s Grand Champions Cup after neither participated in the World League.

The Americans are one of 4 teams that went undefeated in the first week of play, and based on tie-breakers rank 4th of those 4 teams (behind Poland, France, and Italy).

Final Round (must qualify): July 1-4 in Lille, France