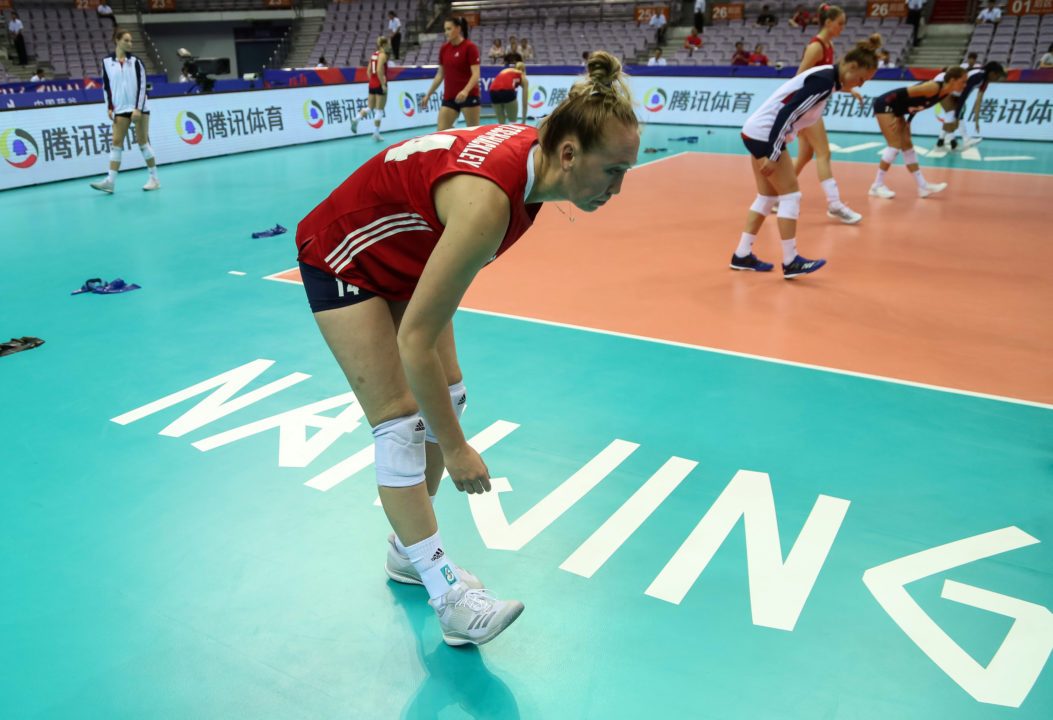 USA Volleyball head coach Karch Kiraly has started Nations League MVP Michelle Bartsch-Hackley on the bench at the 2018 FIVB Women’s Volleyball World Championships. Bartsch-Hackley, after leading the team to the VNL title earlier in the summer, didn’t see the court in the team’s 3-0 sweep of Azerbaijan.

The Americans will play Trinidad & Tobago, playing in their first-ever World Championship, on Sunday, before an off day on Monday. After that, the level of competition steps up considerably, with South Korea, Thailand, and then the big match against Russia to close out pool play next week.

The US beat Russia 3-0 the last time they played, in the preliminary round of the Nations League. In that match, Bartsch-Hackley led all players with 18 points.

With arguably the deepest group of hitters in the tournament, and some clearance to give different players rest and try different combinations in their first two matches of the tournament, we won’t know about Kiraly’s real intentions until at least next week.

11 of the 14 players on the American roster saw court time in the match, so one would imagine that there was intention behind not putting Bartsch-Hackley on the court, as she’s surely one of the team’s best 11 weapons.

By the Nations League final, it was clear that the team played best with Bartsch-Hackley on the floor. If it wasn’t obvious at first, it was highlighted in the final 6 where the Americans went down 0-2 to Turkey, without Bartsch-Hackley starting, and then won the last 3 sets with her on the floor and still leading the team in scoring, in spite of the late substitution. From there-out, she was on the court pretty much full time at the Nations League. So, unless the Americans have seem something in friendlies or in practice that has convinced the coaching staff that this is no longer the case, except her to see more court time as the tournament rolls toward crunch time.

USA Hitters in 3-0 win vs. Azerbaijan: