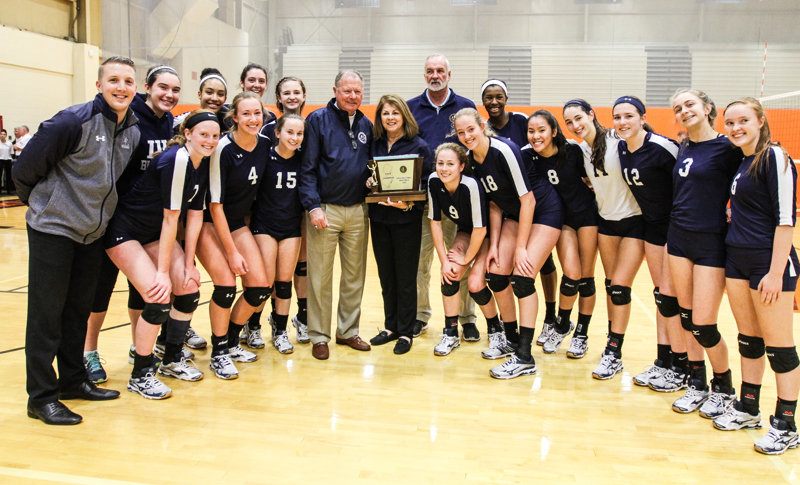 New Jersey held thier high school playoffs on Novemeber 12, 2016 and had some returning state title winners as well as some new school's to the title list.  Current Photo via Alexandra Pais

The New Jersey State Interscholastic Athletic Association held the state final high school volleyball championships on November 12, 2016. There are five different brackets divided up in New Jersey from public groups #1-#4 and a non-public division. The division are classified by location of the school and student population. The championship games were all played at William Paterson University.

Bogota High School dominated once again and won their 8th overall state title against Verona High School. Bogota had an overall record of 28-4 and is ranked #11 in the state. Bogota beat Verona 26-24 and 25-18.

Samantha Gioiosa had 20 kills during the championship game and left her ranked #2 in the state with 428 kills. Gioiosa was also named NJ.com girls volleyball state Player of the Year for 2016.

Carly Waterman from Verona beat out Gioiosa for the state title of most kills during the 2016 season with a total of 455 kills.

Samantha Grandich hit a team high of 20 kills and 16 digs for River Dell but it wasn’t enough to take down Ramapo. Emma Plutnicki had 15 digs, 2 kills, 2 assists, and 1 ace.

Old Tappan won state title and is ranked #1 in the state for the first time in school’s history. Old Tappan defeated Mount Olive in a 25-20 and 25-14 final match. Old Tappan was named NJ.com Team of the Year for 2016 and #1 team in the final top 20. This is Old Tappan’s third state title since 2010.

Becky Chu had 20 assists and 3 aces during the final match for Old Tappan while Julia Passante had a team high of 11 kills.

Hunterdon Central’s Daniella Besecker was the only current teammate to win all three state championship titles. Besecker totaled 8 digs, 7 assists, and 2 aces during her finals match.

Immaculate Heart’s coach Maria Nolan has over 900 wins in her 40-year career and coached the Blue Eagles to their 10th state title win since 2006. Catherine Fazio led the team with 14 kills while libero Erica Timpanaro had 16 digs. Julia Morris leads the state in assists with 251 and tallied 20 during the finals match.

Hudson Catholic lost in the state final but had the best overall season record in school’s history. Alanis Alvarado lead the team with 9 kills and Kaylana LeeChow had a team-high of 8 assists. Andrea Lombeyda and Rose Vega both finished the game with 8 digs.