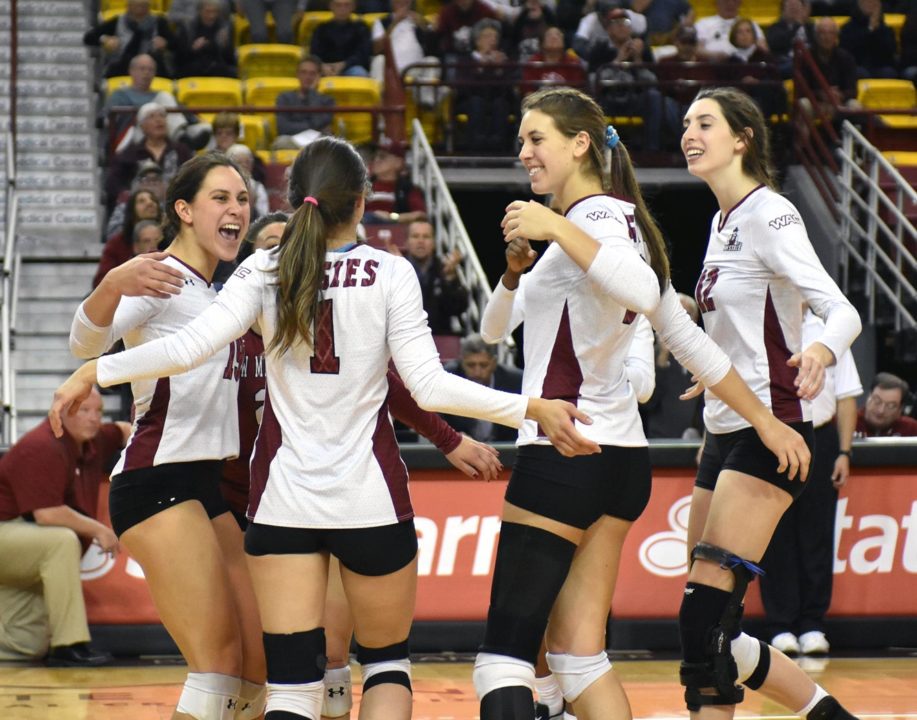 NM State will travel to Eugene, Ore., to face No. 15 Oregon in the first round of the NCAA Tournamentm while Cal Baptist and Utah Valley will participate in the National Invitational Volleyball Championship (NIVC)  Current Photo via New Mexico State, Jaime Guzman

NM STATE TO FACE NO. 15 SEED OREGON IN NCAA TOURNAMENT

Two WAC teams – California Baptist and Utah Valley – will participate in the postseason in the National Invitational Volleyball Championship (NIVC) later this week.

Knudsen earned WAC Player of the Year honors after leading the league in kills (4.27) and points (4.79) and ranking ninth in hitting percentage (.259) in WAC matches. She posted eight double-doubles in WAC play and was a four-time Offensive Player of the Week honoree this season.

Harris repeated as WAC Setter of the Year after averaging 9.62 assists and 2.90 digs per set in conference play. She posted nine double-doubles in WAC matches.

Klavitter earned WAC Libero of the Year honors after breaking the WAC record for digs in a season at 678. She led the league in digs (318) and digs per set (5.68) and ranked second in service aces per set (0.41) in WAC play and was twice named WAC Defensive Player of the Week this season.

Tarawhiti earned WAC Freshman of the Year honors after rafter leading the WAC in kills (4.15) and points (4.61). She had seven double-doubles on the season, including five in WAC matches.

Posey led her team to a third-place finish after being picked to finish fifth in the preseason poll. The Roos won 20 matches for just the third time in program history. She earned the award for the second time in her career.

With its wins over Chicago State and Kansas City, UT Rio Grande Valley earned its first-ever WAC regular-season title. The Vaqueros also broke the program NCAA Division I record for conference wins with 13. The previous record was 10, set by the 2017 squad. UTRGV closed out the regular season on a season-best eight-match winning streak. UTRGV last won eighth-straight matches Oct. 4-Nov. 2, 2002

Horton, a junior outside hitter, boasts a perfect 4.00 grade-point average in health care administration. The League City, Texas native is averaging 2.31 kills and 2.27 digs per set this season.

In the championship match of the WAC Tournament, NM State senior Tatyana Battle recorded her 1,000th career dig. In doing so she became the only active player in the WAC with 1,000 career kills and 1,000 career digs. Battle is the WAC’s active leader in kills with 1,372 and has 1,008 career digs.

UVU’S TARAWHITI BREAKS SCHOOL RECORD FOR KILLS IN A SEASON

Utah Valley freshman outside hitter Kazna Tarawhiti broke the Utah Valley NCAA Division I program record for kills in a season during her team’s quarterfinal match of the WAC Tournament when she posted her 495th kill of the season. She is the only Wolverine to surpass 500 kills in a single season and now has 526 on the year, over 100 more than the next closest player in the WAC. Tarawhiti broke the previous Wolverine record of 494 set by the program’s career leader in kills, Kayli Doxey, during the 2009 season.

CSU Bakersfield redshirt freshman Brooke Boiseau broke the school’s Division I single-season record for total blocks when she posted her 110th block in the WAC Tournament quarterfinal match on Nov. 22, surpassing the previous record of 109 set last year by Haylee Roberts. Teammate Mattison DeGarmo finished the season with 109, good for a tie for second place. Boiseau also broke the program single-season record for block assists with 108.

CSU Bakersfield closed out the season with 173 service aces, good for sixth place in the program Division I record books. The all-time record is 267 set by the 2008 team.