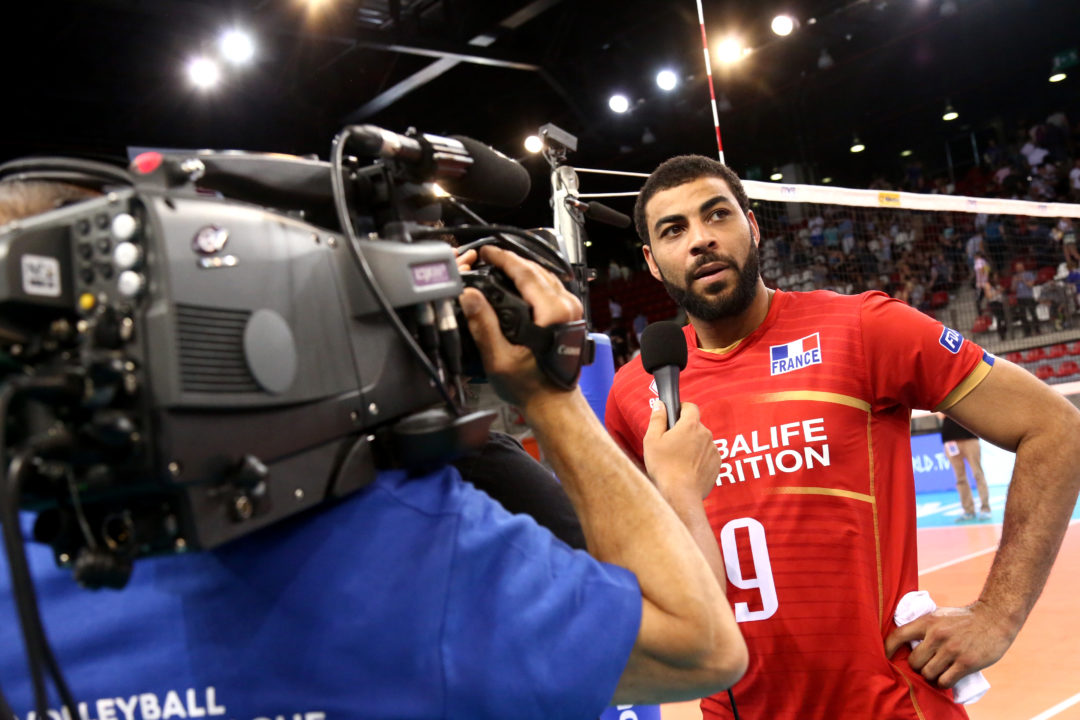 France will be without their starting outside hitter Earvin Ngapeth (above), setter, and libero for week 2 in Lodz. Current Photo via FIVB

French head coach Laurent Tillie has added Trevor Clevenot back to his roster for week 2 of the 2018 FIVB Men’s Volleyball Nations League, but it comes at the expense of 3 of the team’s stars.

Earvin Ngapeth, Benjamin Toniutti, and Jenia Grebennikov have been left off the roster for week 2 as the team heads to Lodz, Poland. All 3 had long pro seasons, with Toniutti and Grebennikov playing in the Champions League Final 4 in early May and Ngapeht playing at the Emir Cup in Qatar after the end of his club season.

That robs the French of their #3 scorer from week 1 Ngapeth (28 points), and their starting libero Grebennikov, who tied for 1st in the tournament with 1.36 digs/set and led all eligible players with a 33.33% ‘excellent’ receiving percentage.

Middle blocker Jonas Aguenier, who scored 16 points across the first 3 games, is also sitting out week 2.

In their place, Tillie has added Raphael Corre, Franck Lafitte, Yacine Louati, and most significantly Trevor Clevenot, who the French revealed is recovering from shoulder surgery.

“We want to take care of his shoulder, the doctor who followed him in Bordeaux told us that he was evolving very well, we want to have him with us so that he has a period of adaptation, ” says head coach Laurent Tillie about the future Milan player. The comments don’t indicate that he’ll play, or play much, but do provide context for why he was absent from week 1.

France finished 3-0 and with the maximum 9 points in week 1 of the World League, beating Iran, Japan, and Australia. They’re 1 set behind table-toppers Poland, whom the French will play to open week 2 in Lodz. Also in that pool are Germany and China.

With some cushion for a Final 6 bid earned via their undefeated first week, and a relatively-weak pool in week 2 (Germany and China combined for a 1-5 record last week), France will be able to rest those key players listed above and still have the possibility of pulling out a win-or-two on the week. They return to a home crowd in week 3 against Serbia, Argentina, and South Korea (which a full-force team could sweep, and a resting team could still get a few wins from) before things toughen-up the week after against France, Brazil, and Bulgaria.

France’s toughest pool comes in week 5 in Modena, when they play the United States, Italy, and Russia. That pool will feature teams with a combined 11-1 record so far in the tournament.

The team will play without a formal backup libero in week 2.