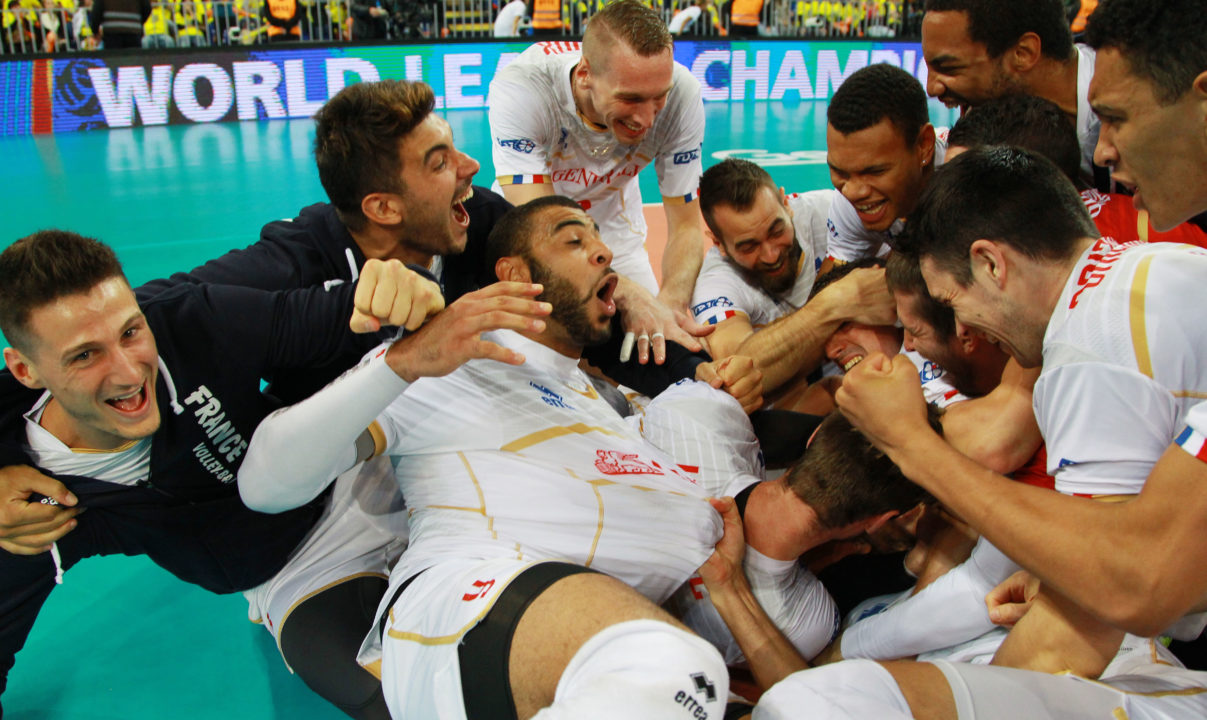 The French Volleyball Federation has announced its 14-player men’s roster that will begin their quest at the 2018 Volleyball Nations League this week in Rouen. The team will open play with a roster that looks very similar to the one that won last year’s FIVB World League, the predecessor to this tournament.

In fact, the team will be without just 1 player who participated in last year’s gold medal game: starting outside hitter Trevor Clevenot. He scored 12 points in 5 sets in that gold medal match (the fewest among France’s starting hitters), but it was an efficient 12 points: he hit 63% and had just 3 hitting errors, which was the best among France’s hitters.

He’s replaced by Kevin Tillie, son of the French head coach Laurent Tillie, who missed last year’s tournament with injury. He was named the best receiver of the 2017 Polish Cup, and was a key member of France’s winning team at the 2015 World League and European Championship.

Also missing from the gold medal match last year are reserve middle blocker Daryl Bultor and libero Nicolas Rossard, though both are available for future weeks on France’s 21-man roster. Guillaume Quesque isn’t on France’s expanded roster, the only member of last year’s Final 6 lineup who isn’t available for the Nations League.

In an interview with the French federation, Nicolas Le Goff discussed the team’s goals. He also reveals that he was dealing with a knee injury for the first half of the club season, leading to his disappointing results there.

“It’s really exciting (to play at home), especially since our last performances in France went very well with the crowd, there was a crazy atmosphere. It was the TQCM in Lyon last year and the World League in Pau where we did not lose a single match,” Le Goff said. “We realize that with our continuing positive results, we have an audience that is growing more and more. There, we know we will have three weeks of the Volleyball Nations League in France, it’s a real pleasure and it motivates us, we want to make our supporters happy and to make us happy on the field.”

As for last summer, Le Goff alluded to mixed results.

“It’s 50/50, first with a super TQCM (World Championship qualifying tournament) in Lyon and the victory in the World League which remains an extraordinary memory. After that, we had to be disappointed to miss the Euro final and the World Grand Champions Cup in Japan. I think we had given too much in the first half of the season, we had very strong emotions and we did not manage to get going again at the European Championships, we saw that we were not ready in our minds, not focused. It’s a bit like what happened at the Olympics, we had a very strong emotional qualifying tournament in Japan, behind a World League medal, and there was a letdown afterwardind. It’s really frustrating to have missed the Euro because we did not know how to defend our title, but every time we fell, we managed to get up, we will use it to advance this season. We know that in a sport like volleyball where the competition is tough, it’s very difficult to win all of the competitions.

France will host the opening pool 1 of the tournament with Australia, Iran, and Japan. They will also host again in Aix-en-Provence in week 3, and then the Final 6 tournament in Lille in the north of France.

He must be injured.