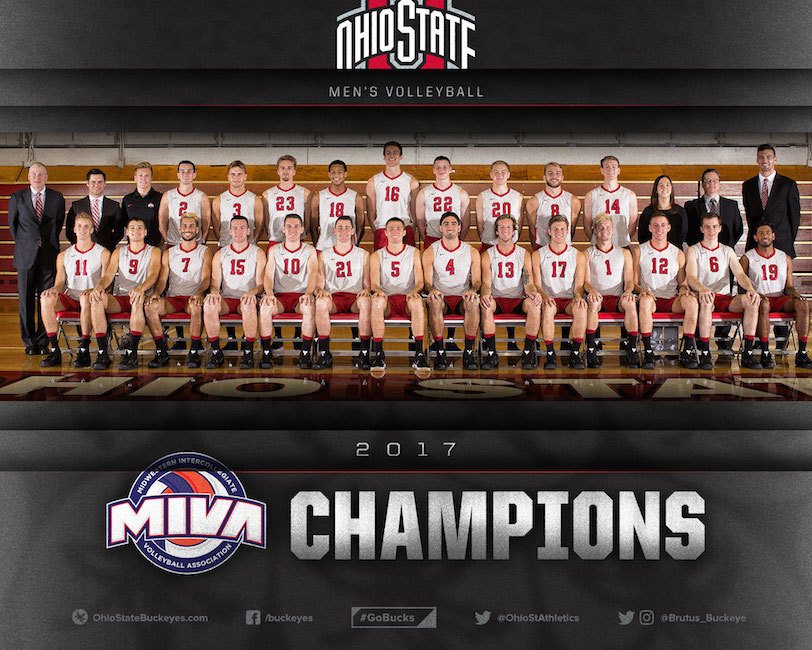 The No. 1 Ohio State Buckeyes clinched the Midwestern Intercollegiate Volleyball Association regular season title with a 3-0 sweep of McKendree on Friday night. OSU secured its 26th MIVA championship with the 25-17, 29-27, 25-18 victory, its 28th consecutive win versus MIVA opponents.

The Buckeyes won all major statistical categories, outhitting the Bearcats .326 to .220, out-acing them 8-4 and outblocking them 4-2.

Senior opposite Miles Johnson downed a match-high 20 kills to lead Ohio State. Junior outside hitter Nicolas Szerszen added 14. Szerszen hit at a .542 clip and served up three aces, while Johnson boasted a .486 efficiency and accounted for two aces. Both turned in a team-best seven digs alongside senior libero Gabriel Domecus.

After falling behind 6-5 in the opening set, Ohio State scored seven of the next nine points to take a 12-8 lead of its own. Five McKendree miscues aided the run. Four Johnson kills helped push the Buckeye advantage to eight at 22-14. Szerszen added a pair of kills to make it 24-15. A service error ended the stanza.

The Bearcats took an early 4-1 lead in Set 2. The Buckeyes turned the tables with a 9-3 run, including aces by Johnson and Maxime Hervoir, which put OSU on top 10-7. Trailing 13-9, McKendree rallied to tie the score at 14 and 15, thanks in part to four Buckeye miscues. Down 17-15, the Bearcats scored four in a row, including two kills and an ace to go ahead 19-17. The teams traded points and the lead over the next several serves. Ohio State earned the first shot at the set at 24-22 after three Johnson putaways. A pair of kills and a block thwarted two set-point chances and gave McKendree one of its own at 25-24. Johnson downed two more kills to give the Buckeyes a 26-25 edge. Reuter and Walker kept the set going with kills for the Bearcats. OSU stole away the set with two Johnson kills and one from Szerszen.

Ohio State outhit McKendree .258 to .087 in the final stanza to seal the sweep. The teams split the first 16 points of the set, before the Buckeyes broke away with a 3-0 run, including a kill and an ace by Szerszen. Ohio State would not relinquish the lead the rest of the way, instead going up five at 19-14 and 21-16 as Szerszen and Hervoir added two kills apiece. The Buckeyes ended the night on a 4-0 run, including two kills and an ace by Szerzen.

The Buckeyes and Bearcats will face off again Saturday.

COLUMBUS, Ohio — The No. 1 Ohio State University men’s volleyball team secured a Midwestern Intercollegiate Volleyball Association regular season title for the 26th time in school history, clinching the trophy with a straight-sets win (25-17, 29-27, 25-18) over McKendree (9-17, 4-9 MIVA). The Buckeyes are now 24-2 overall and 13-0 in conference play this season. Ohio State also extended its winning streak to 28 consecutive matches versus MIVA opponents.

Miles Johnson and Nicolas Szerszen combined for 35 of 45 OSU kills, attacking .508 as a duo. Johnson averaged seven kills per set, hitting .486 while Szerszen attacked .542 on his 14 kills. Both Buckeyes added multiple aces to their stat line as well. The pair of pin hitters were responsible for a total of 42 points.

Christy Blough dished out 39 assists as the Buckeyes swung .326. He was also one of five OSU players to register five or more digs, including seven each from Gabriel Domecus, Johnson and Szerszen.

Set 1: The first lead of more than one point didn’t come until 9-7 as four lead changes and seven tied scores filled the first 15 points of the evening. Ohio State would maintain the upper hand for the remainder of the set, leaning heavily on five kills apiece from Johnson and Szerszen in a 25-17 triumph.

Set 2: Johnson exploded for a dozen kills in the second stanza, bouncing 12 balls with just one error on 20 attempts (.550). He stepped up when his team needed him the most, recording four kills after the set spilled past the 25-point mark. Two Johnson kills fended off McKendree set-point opportunities and the final termination was good for point number 29, sending the Buckeyes into intermission leading two-sets-to-none.

Set 3: Szerszen lifted the Scarlet & Gray to victory in the third, crushing six kills on errorless attacks to go along with five digs and two aces. The score went back-and-forth early on before a 9-4 OSU run closed out the night, 25-18.

The loss drops McKendree to 9-17 overall and 4-9 in the Midwestern Intercollegiate Volleyball Association. The Bearcats will get a chance at redemption tomorrow evening as they will once again square off with the Buckeyes at 6 p.m.

Walker landed a pair of attacks as the Bearcats opened the match with a 5-4 lead. Ohio State countered with a 7-2 run to take a 12-8 advantage before a 5-1 spree that put the Buckeyes on top 21-13. Rueter put down a pair of kills late in the set but it was not enough to spark a comeback as Ohio State took a 1-0 lead.

A kill from Fiduccia and an ace from Patterson opened a 4-1 lead for McKendree in set two. The Buckeyes fired back with six of the next seven points to go in front 7-5, followed by a 4-1 run to jump ahead 12-8. A kill from Rueter and Patterson’s second ace of the set jump started a 5-1 run for the Bearcats that tied the set at 14 all. Ohio State moved in front 17-15, but McKendree rallied with four straight after kills from Frank and Patterson put the Bearcats on top at 19-17. The Buckeyes sandwiched a pair of 3-0 runs around two points from McKendree to take a 23-21 lead, but Frank, Fiduccia, and Schmidt all converted attacks to flip the script as a 4-1 run forced set point for McKendree with a 25-24 lead. The Buckeyes responded with a pair of kills, but the Bearcats wouldn’t be outdone as Rueter and Walker torched back to back kills to push Ohio State to the brink at 27-26. The Buckeyes regained control with two straight kills before completing the comeback with a kill on set point to take a 2-0 lead.

Rueter and Frank put down kills as McKendree once again opened an early lead at 5-4. The teams traded points until a 3-0 run from Ohio State gave the Buckeyes an 11-8 advantage. Walker put away a pair of attacks as the set shifted to 14-12 in favor of Ohio State. Another 3-0 run opened a 19-14 lead for the Buckeyes. Frank brought McKendree within three at 21-18 after scoring on a pair of swings, but Ohio State proved to be too much as the Buckeyes closed out the match on a 4-0 run.