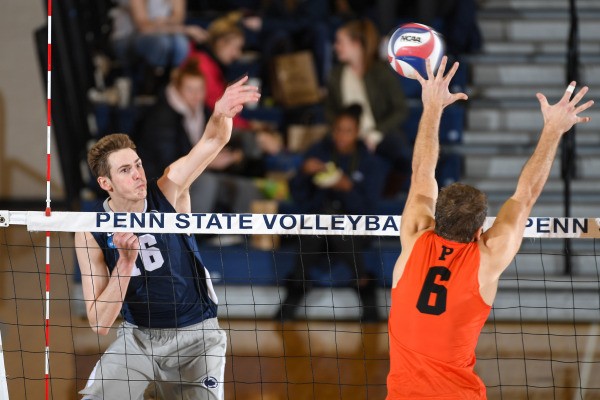 In the decisive fifth set, Princeton used a 4-1 run, including kills by Luck and Ratter and a block by Oboh, to take an 8-5 advantage at the changeover. A trio of PSU miscues pushed the Tiger lead to 13-9. Penn State rallied with six of the next seven points to tie the score at 13, stave off a Princeton match point attempt at 14-13 and earn one of its own at 15-14. The teams tied at 15, 16 and 17 as the Tigers held off two more PSU match-point efforts. A kill by Albrecht and a triple block by Nathan Smith, Nugent and Gear snagged the 19-17 win for Penn State.

Princeton led 13-9 midway through Set 1. Penn State knotted the score at 13 on a solo block by Callaway en route to a 20-17 lead of its own. Trailing 21-18, the Tigers put together a 6-1 run, including a pair of Nittany Lions miscues and an ace, to go ahead 24-22. Princeton sealed the win on a PSU service error two plays later.

Penn State raced out to a 12-6 lead in Set 2. Princeton answered with a 6-0 run, including four straight blocks by Huhmann, to knot the score. The Nittany Lions pushed the advantage back to four at 18-14. The Tigers would get no closer than two the rest of the stanza, which ended on a Nugent ace.

The Nittany Lions led Set 3 from start to finish, ending the set on a 10-3 run, including five Princeton miscues and a pair of Albrecht kills. PSU hit at a .542 clip in the stanza.

The Tigers forced a fifth set by hitting .452 in a 25-19 Set 4 win, which featured six ties and four lead changes. The last lead change came mid-set as Princeton scored 11 of the next 15 points to turn a 10-8 deficit into a 19-14 advantage. Ratter downed three kills, while Luck managed three kills and two blocks in the rally. Penn State cut the margin to three at 23-19, but a kill and two blocks by Luck evened the match at two sets apiece.

Calvin Mende led the Nittany Lions in kills with 17, hitting at a .659 clip for the night.

Aidan Albrecht, Chris Nugent, and Kevin Gear also recorded double-digit kills on the night contributing 16, 14, and 11 kills, respectively. On the defense, Nugent led the team in digs with nine, just missing out on a double-double.

The Nittany Lions found their stride, and they took sets two and three with their match high .524 hitting percentage coming out of the third set.

The Tigers got off to a 4-1 lead early in the fourth set, ultimately winning the set 25-19.

Tied 2-2 entering the fifth set, Princeton got off to another lead racing out to an 8-5 advantage; thus, triggering the switching of sides.

A Princeton service error and a kill from Albrecht brought the Nittany Lions within one, before the Tigers extended their lead to three again at 10-7.

Both teams exchanged points back and forth before Princeton was able to get two in-a-row leading 13-9, forcing a Penn State timeout.

Improving to a 7-2 record in conference play, the Nittany Lions now lead the EIVA followed by NJIT and Princeton tied at second, both with 6-4 records.
Penn State returns to the court Saturday night as they host the NJIT Highlanders at 7 p.m. ET in Rec Hall.

Courtesy: Princeton Athletics
For the second time this season, a youth-filled Princeton team served a match ball against the EIVA’s most dominant team over the last two decades. In both cases, the Nittany Lions fended off the upset — including in thrilling fashion Friday night in State College — but the Tigers have showed over the last 11 days that they continue to move closer to the elite class in the sport.

They also moved into one of the wildest EIVA final sprints in recent history.

Only three days removed from #13 Penn State (15-9, 7-2 EIVA) shocking #1 Ohio State in Rec Hall, the Nittany Lions had to use a late surge in the fifth set just to draw even with Princeton (10-11, 6-4), and then needed four match balls to put the Tigers away. The win moves the Nittany Lions two up on the loss column over the rest of the league, while a Charleston loss left it at 0-11. The leaves six other teams with either four or five league losses, all of which will be battling for three open postseason spots over the final three weekends.

It’s been crazy already this season, but it’s about to get even wilder.

Princeton put itself in position to earn a little breathing room with a stunning late push. Following a 25-23 win in the opener, Princeton dropped 25-21 and 25-17 sets to a Penn State team that looked ready to take control of league play. The Tigers, who continue to start three freshmen who are already making major contributions, stunned Rec Hall with a 10-5 run to close the fourth set and set up the winner-take-all fifth. Runs of 3-0 and 4-2 during the fifth gave Princeton a 13-9 advantage, but Penn State pushed back with a 4-0 run of its own to even the set at 13-13.

Middle Junior Oboh put away his eighth of nine kills to earn a match ball, but freshman Parker Dixon‘s serve just missed the sideline to even the match. Penn State took the next point for its first lead of the final set and forced Princeton to sideout time and again to keep the match alive. Dixon, Oboh, and Kendall Ratter each responded on the first three match balls, but a Penn State block at 18-17 finally closed the match.

Dixon had 17 kills, six digs and six blocks in the loss, while Ratter had 16 kills, three blocks and two digs. Freshman George Huhmann had one of the best defensive performances for a Princeton volleyball player over the last decade, recording 12 blocks to go along with five kills and four digs, while classmate Greg Luck had 11 kills, nine digs, five blocks and two service aces. Senior Jonah May paced the offense with 48 assists.

Princeton will need to bounce back quickly, as it faces Saint Francis Saturday at 4 pm. The Red Flash posted a 3-1 win over NJIT Friday night to become one of five teams in the league (Princeton, NJIT, Saint Francis, Sacred Heart, and Harvard) with four league losses. Princeton defeated Saint Francis 3-2 in Dillon Gym earlier this season.