No. 2 BYU Secures MPSF Tourney Title with 4-Set Win Over No. 3 UCLA 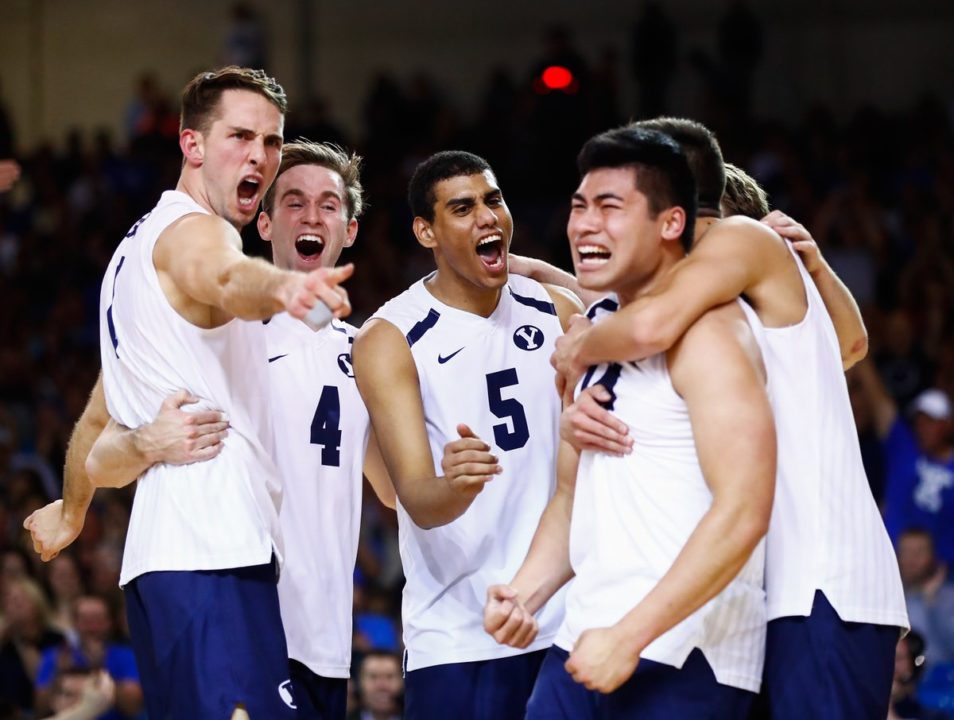 BYU is off to its third straight NCAA Tournament after sewing up the MPSF Tournament title with a four-set win over UCLA on Saturday.  Current Photo via BYU Athletics

PROVO, Utah – BYU is off to its third straight NCAA Tournament after sewing up the MPSF Tournament title with a four-set win over UCLA on Saturday.

BYU seized the lead early in Set 1, scoring the first three points, including back to back blocks by Sander, de Brito Ferriera and Garcia Fernandez and a Leo Durkin ace. Down 9-6, UCLA turned the tables with 13 of the next 17 points, capped by a 7-0 run. Five different players posted kills during the stretch, with Martin turning in two, and Gyimah served up two aces at the Bruins surged ahead 19-13. The Cougars were within four at 21-17, but UCLA closed out the stanza on a 4-0 run, with Gyimah notching a kill and back-to-back blocks to wrap up the 25-17 win. BYU struggled to find its offensive groove, hitting -.048 in the stanza, thanks in part to four Bruin blocks, while UCLA hit at a .348 clip.

BYU again managed a 3-0 lead to start Set 2, but soon trailed 6-4 thanks to three Hessenauer putaways and an Arnitz ace. The Cougars tied the score three times, last at 10, but trailed 13-11 midway through the stanza. A pair of Price Jarman blocks and a Garcia Fernandez ace gave the Cougars a 15-13 edge at the media timeout. Down 17-15, UCLA scored three of the next four to even things up at 18. The Bruins burned both of their timeouts as Garcia Fernandez downed two kills and Stom Fa’agata-Tufuga added a third to put BYU up 21-18. An Arnitz kill and Gyimah stuff had UCLA back within one at 21-20, but it was nearly all Cougars from there. Garcia Fernandez closed the door on the 25-21 victory with two kills and a block.

UCLA came out of the intermission on fire, scoring the first four points, with kills by Missry, Gyimah and Hessenauer, forcing a Cougar timeout. BYU scored seven of the next nine, including two kills and an ace by Sander, to turn the deficit into a 7-6 lead of its own. After a tie at 9, the Cougars pulled away with five straight points, capped by a triple block by Sander, Garcia Fernandez and de Brito Ferriera that made it 14-9. Aces by Garcia Fernandez and Fa’agata-Tafuga pushed the BYU advantage to seven at 20-13, putting the set out of reach as UCLA would get no closer than five the rest of the way. Two Sander putaways and a service error sealed the 25-18 win.

BYU boasted a five-point lead at 12-7 in Set 4, with help from back-to-back stuffs by de Brito Ferriera and Sander and five UCLA miscues. The Bruins narrowed the gap to two at 12-10, prompting a Cougar timeout, but could not break through. The teams split the next 10 points, leading to a 17-15 score. BYU edged closer to the MPSF title with a 5-2 run, including two kills each by Sander and Garcia Fernandez. Trailing 22-17, UCLA did not give in, instead scoring three in a row, including a Gyimah putaway and Ma’a ace, to slice the margin to two at 22-20. BYU called timeout and got a Sander kill out of the break, but Gyimah answered. In the end, a garcia Fernandez putaway and a hitting error by Arnitz, gave BYU its first conference tournament title since 2016.

BYU defeats UCLA in FOUR SETS for the title! ?

@BYUvolleyball is the 2018 MPSF Tournament Champions! ??

Cougars get the automatic bid into the NCAA Tournament

The loss snapped a four-match win streak for the Bruins, who must now wait and hope for an at-large NCAA berth.