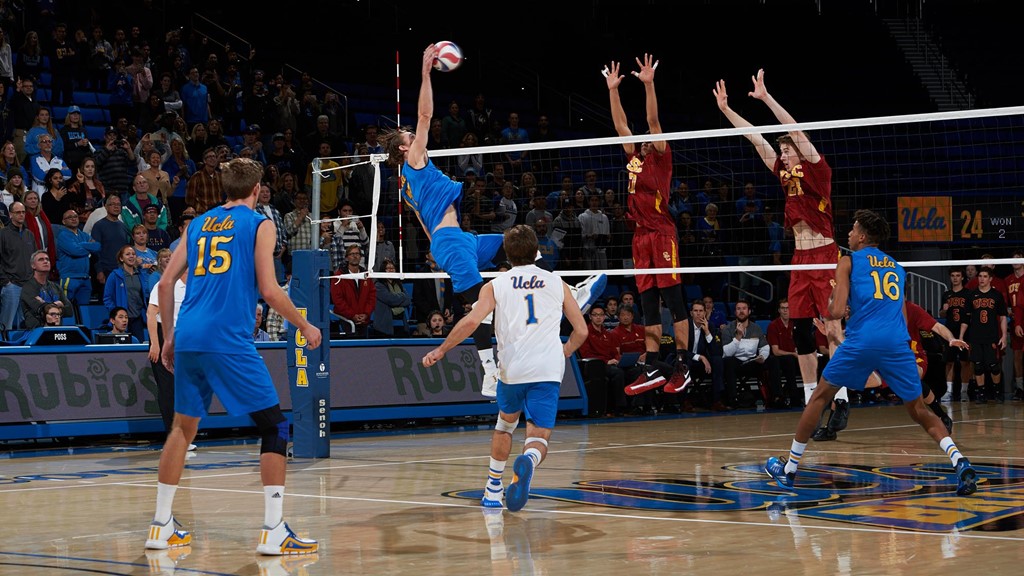 No. 2 UCLA turned in an efficient and dominant offensive performance in an hour and 21 minute sweep of crosstown rivals (14-1) since 2005.  Archive Photo via UCLA Athletics

LOS ANGELES – No. 2 UCLA turned in an efficient and dominant offensive performance in an hour and 21 minute sweep of crosstown rivals USC on Wednesday night to earn their sixth-straight victory and move to 3-0 in MPSF play. The win also moves the Bruins to 14-1 on the season, marking the program’s best start since 2005 (15-1).

The Bruins hit at a .458 clip, well over their .363 season percentage, which ranks second nationally. The effort included a .591 clip in the opening stanza and a .556 effort in Set 3. UCLA nearly doubled the Trojans’ offensive output, besting USC 44-23 in kills. The homestanding Bruins also topped USC in aces (6-1) and blocks (9-7.5).

Junior outside Dylan Missry and senior opposite Christian Hessenauer each turned in double-digit kill tallies to lead the Bruin attack. Missry notched 12 kills and a team-best six digs, while hitting at a .429 clip. Hessenauer put down 11 kills at a .412 clip, while adding a team-high six digs and five blocks. National hitting percentage leader sophomore middle Daenan Gyimah added seven kills on an errorless .700 effort (7-0-10), while also chipping in five stuffs and a team-best two aces. Two other players – redshirt senior middle Oliver Martin and senior outside JT Hatch – managed six putaways each to round out the Bruin offense.

Junior outside Ryan Moss was best among the Trojans with nine kills, while redshirt junior outside Jack Wyett added six putdowns to go with a team-best four digs and four blocks.  Freshman middle Sam Lewis served up the team’s lone ace.

Set 1 was a three-point game midway through with the Bruins up 13-10. Hessenauer notched three kills and a block, while Gyimah and Martin turned in two putdowns apiece in the early going for UCLA. Wyett and Moss downed two kills each for USC, but the Bruins pulled away with a eight of the next 10 points, part of a 12-5 run to close out the stanza. Two kills and an ace by Hessenauer and two kills by Micah Ma’a put the Bruins ahead 21-12. A solo block and a kill by Martin helped UCLA wrap up the 25-15 win.

USC held the early advantage in Set 2, leading 9-5 with help from three Moss kills and four Bruin errors, but could not hold overcome hitting woes for a win, hitting at a -.067 clip with 10 errors to go with their eight kills. UCLA called timeout and rallied to tie the score at 10 before surging ahead by two at 14-12. Missry downed three kills and the Trojans chipped in three miscues to give the Bruins the lead. The teams tied at 15, 16 and 17, before UCLA broke away for good with a final 8-1 push. Three Gyimah stuffs and four USC errors gave the Bruins the 25-18 win and 2-0 lead in the match.

The teams played to a 15-all stalemate in Set 3 with neither earning more than a two-point edge to that point. It was a one-point game late at 19-18 UCLA, before the Bruins turned it on to close out the victory. Hatch, Gyimah and Hessenauer notched kills in the final 6-1 run, which was capped by a pair of Gyimah aces.

Ryan Moss led USC with 9 kills, while Jack Wyett had 6 kills, 4 blocks and 4 digs.  The Trojans were without starting outside hitter Gianluca Grasso, who was out with a concussion suffered in practice this week.

UCLA jumped out to a 7-3 lead in the first set and the Trojans couldn’t catch up as the Bruins hit .591 in the set.  USC held a 9-5 lead in the second set before UCLA went on a 7-2 run to move ahead 12-11, then the set stayed tight until the Bruins scored 4 unanswered points to gain a comfortable 21-17 edge while getting 11 digs and 5.0 blocks overall.  The third set was close until UCLA scored back-to-back points to go up 17-15 and then pulled away, finishing the match with a pair of aces (the Bruins hit .556 in the set).