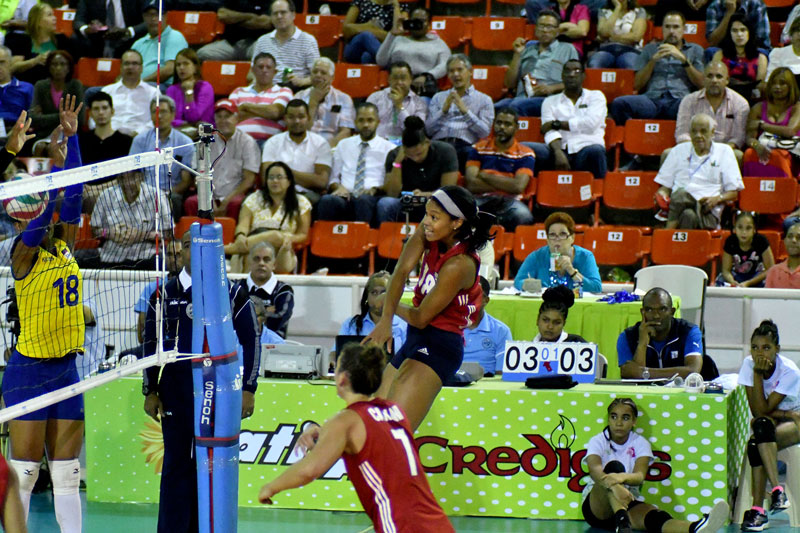 Aiyana Abukusomo-Whitney's 20 points spearheaded the American effort as they move on to the semifinals. Archive Photo via NORCECA 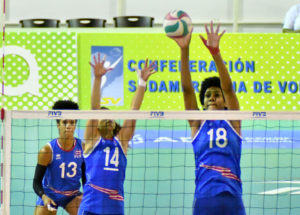 Puerto Rico had a sizable advantage in block and serve in downing Peru as they will meet Colombia for a top five finish. 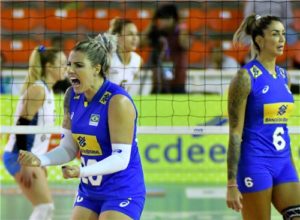 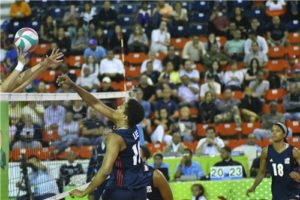 Cuba carried the momentum from Monday’s five-set win over the United States to a sweep of Trinidad and Tobago on Tuesday. Meanwhile, the Americans bounced back with a sweep of Group B leader Puerto Rico to claim the pool title with 11 points. 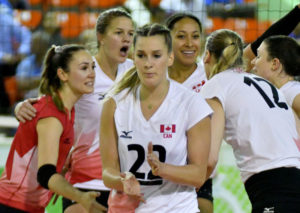 Canada claimed its spot in the semifinals with its third straight sweep, handing the Dominican Republic its first loss of the tournament. Meanwhile, Peru claimed its first win of the Pan Am Cup with a sweep of Costa Rica.

The Americans will now move on to the semifinals while Colombia falls to the 5th-8th place classification tomorrow after the United States earned a powerful sweep. As one would expect in a 75-46 match, USA dominated in spikes (39-21), blocks (14-6) and aces (8-1). They’ll now face Canada for a spot in the finals.

While no players for Colombia surpassed six points, the United States had four in double digits led by a 20-point outburst from Aiyana Abukusumo-Whitney that included six aces. The others in double figures were Chiaka Ogbogu (11 points) and Haleigh Washington (11 points) as recent college grads out of the middle along with former Utah star outside hitter Adora Anae (10 points).

Lauren Carlini, captain of United States: “We played real well. It is winning time. We are in the medal round after playing clean volleyball.”

Jonathan Newman-Gonchar, coach of United States: “We put a lot of pressure with our serves. We knew that we were going to have our hands full against Colombia and their good setter.”

Maria Marin, captain of Colombia: “We couldn’t control their serves and they played almost perfect. Tomorrow is another day and there is still hope to qualify to the Pan Am Games here.”

Antonio Rizola, coach of Colombia: “They played almost without errors and with a good blocking structure. Their serves had a good quality.”

In a back-and-forth affair, the Dominican Republic edged out Puerto Rico for a spot in the semifinals. They had to overcome a 2-1 set deficit to accomplish the feat, but used a stronger attack (61-55 in spikes) on three less team errors to overcome the Puerto Rican block (10-7). That pushes the Dominican Republic to a meeting with Brazil, where the winner will move forward to the championship match.

Cuba just edged out Argentina in total score 100-99, so it was fitting the match went to a fifth. However, that final set was all Cuba after it was a bit surprising they fell behind 2-1 in games. They wound up with more blocks (12-7) and aces (9-4) despite less kills on more errors, as Laura Beatriz Suarez Hernandez (18 points) and Sulian Caridad Matienzo Linares (17 points) led Cuba past Paula Yamila Nizetich (24 points) and Argentina. Cuba now heads on to the 5th-8th place classification while Argentina goes to 9th-12th.

Sulian Matienzo, captain of Cuba: “We played very bad in the second and third sets and our coach complained to motivate us and we recovered to get the win.”

Wilfredo Robinson, coach of Cuba: “We have a lot of respect for Argentina which I consider a dangerous opponent. We have improved our game, especially the reception and the blocking.”

Paula Nizetich, captain of Argentina: “We have had many ups and downs throughout the tournament. Cuba hurt us with the serves. They deserved the victory.”

Guillermo Orduna, coach of Argentina: “The result comes from our own mistakes in the key moments. Cuba used players off the bench who delivered.”

Mexico actually outscored Peru, as the first set was one-sided and the rest were all tight – including an incredible final two games in extra points. Peru squeezed things out by being more efficient and with sizable contributions from Karla Ortiz (20 points) and Kiara Montes (19 points). Mexico wound up with more kills (64-57) and blocks (11-6) as Andrea Rangel and former NCAA Player of the Year and USC grad Samantha Bricio each notched 18 points. Peru will now go to the 5th-8th place classification while Mexico will end up somewhere between 9th and 12th.

Clarivett Yllescas, captain of Peru: “It was a close battle against a very fast Mexico. It was a match of good defense and we were able to keep the calm.”

Andrea Rangel, captain of Mexico: “We lacked decision at the end and Peru played good defense. It was a battle.”

Carlos Aparicio, coach of Peru: “It could have gone either way. The winners were the fans who enjoyed the battle. My girls played hearts out game and we reduced mistakes.”

Ricardo Ponce, coach of Mexico: “We couldn’t close the third and fourth set despite the opportunities. That was the difference. Peru, on the contrary, played with decision and clarity.”