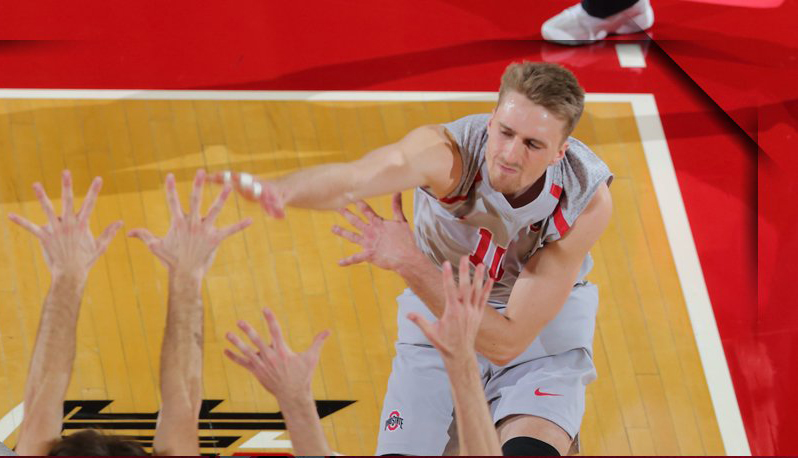 After the Buckeyes dominated the opening stanza against the Tornado, which were making their NCAA debut, the teams settled in for a back-and-forth affair. But, in the end, Ohio State hung on for the win, outhitting King to .528 to .250 and besting the Tornado in kills (46-30), aces (8-1) and blocks (6.5 to 5).

Szerszen paced the Buckeyes with 14 kills, four aces and four digs, while hitting at a .619 clip. Hanes chipped in 12 kills on a .588 hitting effort, while Leeson turned in 11 putaways on an errorless .846 hitting performance and racked up a team-best four blocks. Senior outside Maxime Hervoir tacked on five kills, while junior setter Sanil Thomas and redshirt junior libero Aaron Samarin served up two aces apiece.

For King, senior outside Jeff Sprayberry accounted for 13 of the team’s 30 kills, while hitting at a .296 clip. Senior right side Kiel Bell chipped in nine putaways and a team-leading five digs, while hitting .238. Senior middle Adrian Besson put up three blocks and added two kills. Senior right side Sean Luhmann and junior middle Jon Wheaton tallied three putaways each and teamed up on a match-point saving stuff.

Ohio State jumped out to an 8-0 lead with two kills from Szerszen and a kill and a block by Hanes. King called timeout and scored two out of the break, but couldn’t stop a 5-1 onslaught by the Buckeyes. Three Hanes putaways and an ace and a kill by Szerszen lifted OSU to an 11-2 advantage. Two Hanes kills and three Tornado miscues put Ohio State ahead 16-4. Three Buckeye miscues and a Besson putaway had King within 10 at 18-8, but the Tornado couldn’t break through. Two Leeson kills and a stuff by Hanes pushed the advantage to 13 at 22-9. King did not go away, scoring three of the next four, but, in the end, Hanes and Hervoir came through with kills to close out the 25-13 win. Hanes and Szerszen turned in five kills apiece and Leeson added four putaways and three blocks as OSU outhit the tornado .524 to .000.

Set 2 was a completely different story as the teams tied 16 times and the lead changed hands five times. King led 23-21 late in the stanza, but Ohio State stole away the set with a final 4-0 run. Kills by Szerszen and Leeson set up the final point, a Sprayberry hitting miscue.  The Tornado led 10-8 after two kills and a block by Sprayberry and two Bell putaways. OSU tied it up at 10, 11 and 12, but King held on, going up 14-12 on a Luhmann ace. OSU tied it up at 16 on a Szerszen ace, and broke through to go up 18-17 on a kill and an ace by Leeson. The Buckeyes grabbed a 20-18 advantage, but the Tornado weren’t done yet as Sprayberry, Wheaton and Bell downed kills to put King on top 22-20. Sprayberry made it 23-21 before OSU came through with the final rally.

Set three was close through the midway point, standing at an 11-all tie, before the Buckeyes pulled away, going up 14-11 with help from two King miscues. The Tornado were within two twice, last at 15-13 before Ohio State turned it on to finish out the set on a 10-5 run. Two kills each by Szerszen and Laffin and aces by Szerszen and Sanil Thomas buoyed the Buckeyes in the final stretch. Szerszen served up two perfect balls to push OSU ahead 22-15, then a King service error and Laffin putaway put the Buckeyes on the hill at 24-17. A stuff by Luhmann and Wheaton kept the Tornado alive, before Laffin issued the final blow.

With the win, Ohio State (24-5) advances to play UC Irvine (21-9) on Tuesday in Los Angeles. The remainder of the tournament will be played at Pauley Pavilion on May 1, 3 and 5. With the loss, King ends the season at 23-6 after making their first ever NCAA Tournament appearance.