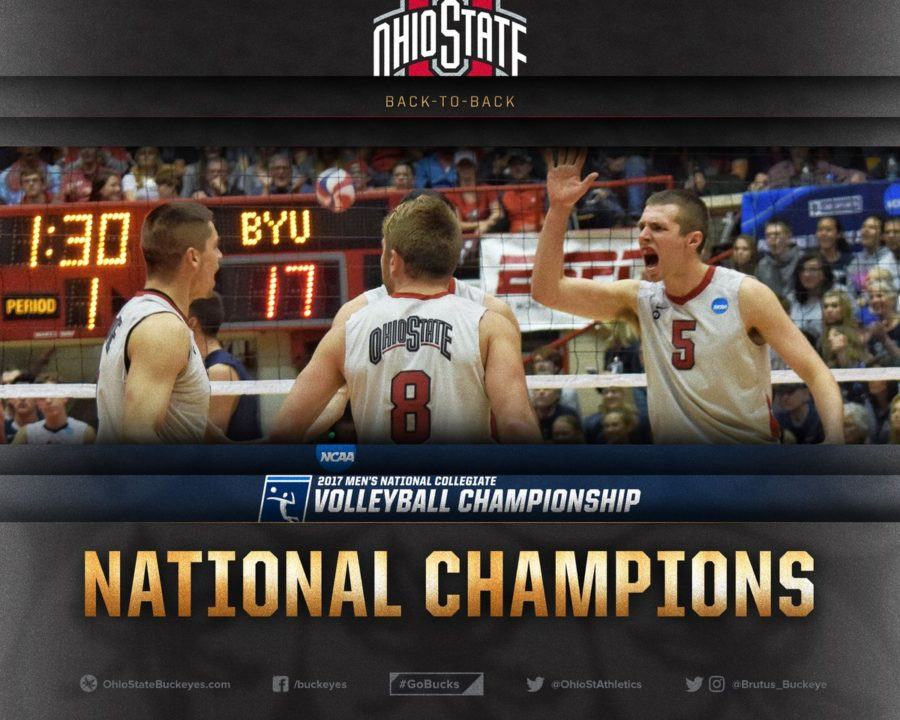 Frenchmen Nicolas Szerszen and Maxime Hervoir carried the Buckeyes to their second straight NCAA Championship in a sweep of BYU on Saturday night. Current Photo via Ohio State Athletics

No. 3 BYU put up a fight but the No. 1 Ohio State Buckeyes captured their second straight men’s national championship win over the Cougars Saturday night at home in St. John Arena. OSU won the match 25-19, 25-20, 25-22, and its third national title (also 2011 and 2016) with a tough serving game and efficient offense. The Buckeyes also topped then No. 1 seed BYU in a sweep in the 2016 NCAA title match in University Park, Pennsylvania.

The Buckeyes hit at a .353 clip for the match, while holding BYU to a .243 effort. The Cougars did win the blocking battle 8-6. Both teams served up four aces, but a strong service game often kept BYU out of system.

Junior outside hitter Nicolas Szerszen carried the load for the Buckeyes, tallying a match-high 16 kills, while hitting .480 and adding a team-best eight digs. Fellow Frenchman junior outside Maxime Hervoir added 10 kills and hit .471 while posting four blocks. Senior opposite Miles Johnson chipped in nine putaways in his collegiate finale.

The Buckeyes gave up an early three-point lead and trailed 8-7 in Set 1, but built an eight point lead and held BYU at bay in a 25-18 win. Down 5-2 early, BYU responded with a 5-1 run, including kills by Leo Durkin, Sander and Tim Dobbert to go up 7-6. A kill by Joseph Grosh made it 8-7 Cougars, but it was nearly all Ohio State after that. The Buckeyes scored three straight, including back to back aces by Nicolas Szerszen to go up 10-8. OSU expanded its lead to eight at 18-10 and forced BYU to use both of its timeouts along the way. At the second break (18-10), the Cougars turned to Patch off the bench. The junior chipped in a pair of kills and BYU also got help from a pair of Langlois blocks to cut the margin to five at 22-17. Szerszen added a pair of kills to set up Ohio State’s first set-point chance at 24-18. A BYU service error ended the stanza at 25-19.

The teams were close through the first 15 points of Set 2, but OSU maintained the edge at 8-7. The Buckeyes went on to a five-point lead at 14-9 as Johnson pounded down a trio of kills. Szerszen added a three of his own to make it 19-12 Ohio State. Down 21-13 after kills by Johnson and Hervoir, BYU mounted a comeback, scoring five straight, including a trio of aces by Patch, to cut the margin to 21-18. A service error ended the run and OSU closed out the set with kills by Hervoir and setter Christy Blough and a BYU miscue.

BYU took its first lead of the night by scoring the first point of Set 3 on a kill by Langlois. Patch started the stanza and quickly made an impact, giving the Cougars a 6-5 lead with two kills and a block. Another Patch putaway made it 9-8. Szerszen added his fourth kill of the set to tie at 9-all and Hervoir chipped in a pair to give the Buckeyes the lead at 11-10. Ohio State went on to a 15-13 advantage at the media timeout thanks to a pair of BYU service errors. An ace pulled the Cougars within one at 16-15, but a block and a kill by Szerszen made it 18-15 OSU. The teams split the next six points, leading to a 21-18 score. A Buckeye ace and Szerszen kill made it 23-18. BYU wasn’t done yet, however, turning in three straight kills, one each by Jarman, Dobert and Sander, and forcing an Ohio State timeout. A kill by Hervoir put the Buckeyes at championship point, but he missed his serve following that to keep BYU in the match. Szerszen then clinched the match at 25-22 with his 16th kill of the night.