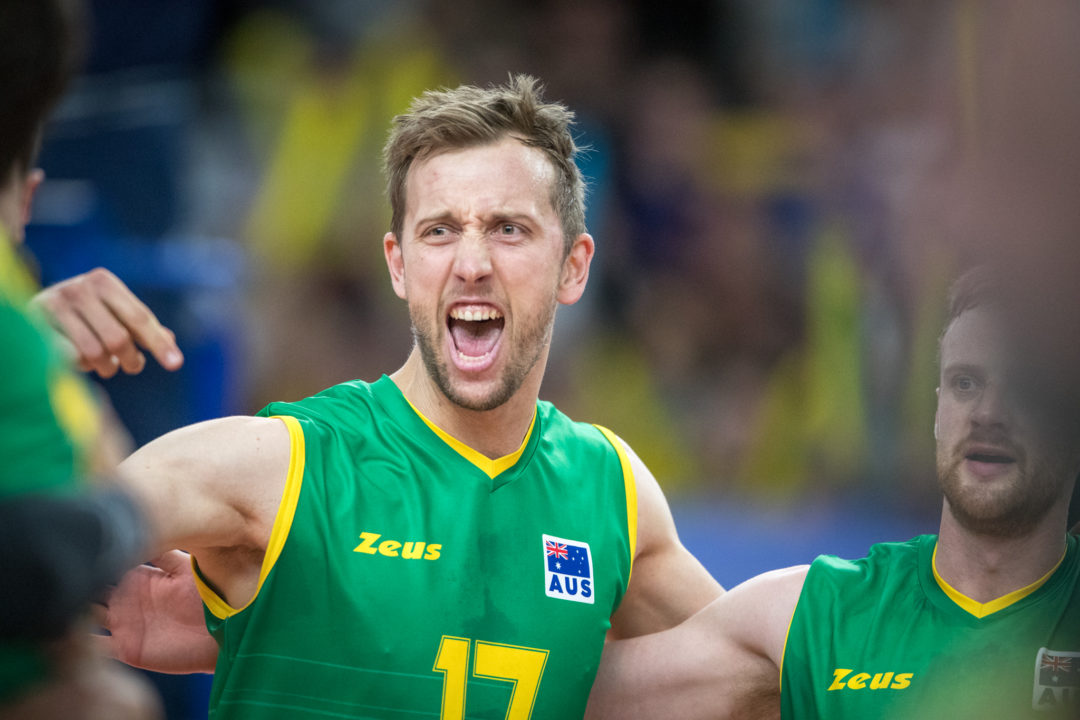 Australia will have to find new avenues for offense without both their 6'9" captain Paul Carroll (above), and outside hitter Nathan Roberts, in Rouen this week. Current Photo via FIVB

The Australian “Volleyroos,” entered in this year’s inaugural edition of the FIVB Men’s Volleyball Nations League as a “challenger team,” have revealed their 14-man roster ahead of Friday’s start to the tournament in Rouen, France.

There, the squad will face a difficult first weekend of play against Japan, Iran, and defending World League (the predecessor tournament) champions France. The team is targeting Japan as a winnable match in the pool, after the Australians beat them last year once in 5 tries.

“This is a great group of guys, the team unity, the bond that the players have with each other and their willingness to sacrifice for each other in the name of the team is exciting.” said Coach Mark Lebedew. “We saw that in the preparation games versus Germany and Italy, we saw that last year in competition and I expect we will see that with this group of guys again this weekend.”

“It’s great for us to start against Japan a team we know really well we played against them five times last year and beat them once and played a couple of great five set matches in Australia. I expect we will be able to at least match that performance. Im really positive that we can kick off with a win.” said Lebedew.

“Iran is also a team from the Asian zone that we are familiar with, its a tough team they have some changes from previous years so that will be a really interesting one for us.”

“The match against the hosts is always a big match. France is the old World League Champions which this event (VNL) has replaced so in a sense France is the reigning champions and a team with some big world stars our guys are already a bit excited for that game to see how we match up.” says Lebedew.

The Australians will carry only one formal libero on their roster, Luke Perry, with the 6’4″ Jordan Richards serving as the emergency libero should something happen to Perry.

The roster is almost identical to the one that Australia used in the Final 6 of Group 2 of the World League last year, where they swept the Netherlands in a tough 3-0 match to win bronze. Among the notable exceptions is the absence of 32-year old outside hitter Nathan Roberts, the co-captain of last year’s squad and scorer of 9 points in that bronze medal match. He’s not on Australia’s expanded 21-man roster. 25-year old Thomas Ewen Douglas-Powell has been called up to join the outside hitters in his stead, as has 23-year old Max Staples.

The team’s leading scorer from that Final 6 last year, and other co-captain, 6’9″ opposite Paul Carroll is also absent from week 1’s lineup, though he’s on the 21-man roster and returns as captain this year, so he’ll probably make an appearance later in the grueling 6-week tournament. Carroll led the team with 18 points in the bronze medal match.

The only other absences from that Final 6 group are backup setter Carsten Moeller and backup outside hitter Samuel Walker.

The offensive load then will fall to Luke Smith at the outside and Lincoln Alexander Williams at the opposite for Australia, who tend to lean heavily on their opposites. Williams, while starting for Carroll in a few matches last season, scored 50 points and hit 37%. The absent Roberts (55%) and Carroll (53%) ranked 1st and 5th, respectively, in Group 2 in hitting percentage among eligible players.

Australia’s 14-man roster for week 1 of the 2018 Volleyball Nations League.