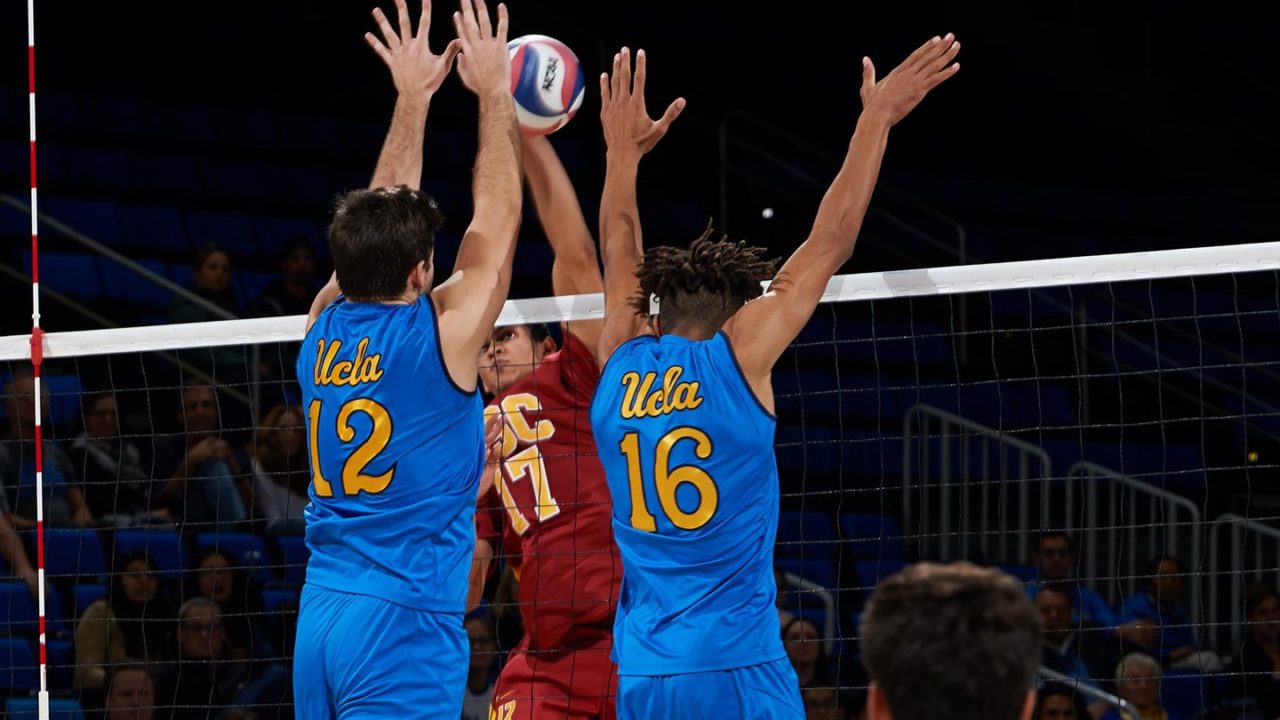 No. 4 UC Irvine won an exhibition contest vs. Benedictine at Mesa, while No. 2 UCLA edged past No. 7 Ohio State and No. 9 Penn State topped No. 14 USC on Saturday afternoon. Current Photo via UCLA Athletics

No. 4 UC Irvine hit .300 as a team and saw three players post double-digit kill efforts in an exhibition match against Benedictine on Saturday morning in Phoenix to move to 6-1 ahead of an evening match with Grand Canyon.

Meanwhile, No. 2 UCLA and No. 9 Penn State earned hard-fought five set wins in Los Angeles. The Bruins bested No. 7 Ohio State, while the Nittany Lions edged past No. 14 USC.

Redshirt junior outside Jack Wyett led all hitters with 20 putaways, while junior outsides Ryan Moss (14) and Gianluca Grasso (10) also turned in double-digit efforts for the Trojans. Wyett hit at a .341 clip and added five digs and five blocks. Freshman middle Sam Lewis accounted for 11 of the team’s 20 stuffs. Grasso and Moss served up two aces each.

It Was Over When: After trailing 9-7 in Set 5, USC called timeout and rallied with six of the next eight points, including three PSU service errors and two Kyle Gear blocks. A McLaren kill and a block by Gear and Albrecht knotted the score at 13. A service error and a kill by Wyett gave USC two chances at the match at 14-13 and 15-14. In the end, kills by Penrose and Albrecht and a bad set by Grasso gave the Nittany Lions the victory.

Senior middle Devin Hill tallied 13 kills and eight digs, while hitting .375. Senior outside Logan Adcock (7), sophomore outside Robert Henige (6) and freshman outside Treven Clizbe (6) followed. Henige hit at a .556 clip with just one error in nine swings, while Clizbe served up two aces.

It Was Over When: UC Irvine left little doubt in Set 4, opening the stanza with an 8-1 run, including three Dominquez kills and a trio of blocks. Benedictine narrowed the gap to five at 10-5, but the Anteaters surged ahead by 10 at 20-10 soon after as Dominquez notched three more kills and Sohacki tallied two kills and a block. The Redhawks would get no closer than nine the rest of the way as the teams traded points. A kill by Friedman capped the UCI victory.

Senior outside Nicolas Szerszen put down a match-high 21 kills and added 12 digs, while hitting .311 for the Buckeyes. Redshirt freshman opposite Jake Hanes followed with 18 kills and three aces. The next highest kill tally was five coming from redshirt junior middle Blake Leeson, who also chipped in four stuffs.

It Was Over When: The teams were level through 20 points in the decisive fifth set, with neither team leading by more than two. A service error and kills by Dylan Missry and Micah Ma’a put UCLA up 13-11, but Ohio State charged back with three straight points, including two Szerszen kills to earn a match-point try at 14-13. The Bruins called timeout and got a Hatch kill and Missry ace out of the break. The Buckeyes called timeout, but couldn’t stop a stuff by Oliver Martin and Hessenauer, which sealed the 16-14 UCLA win and the match.

"The block comes through!"