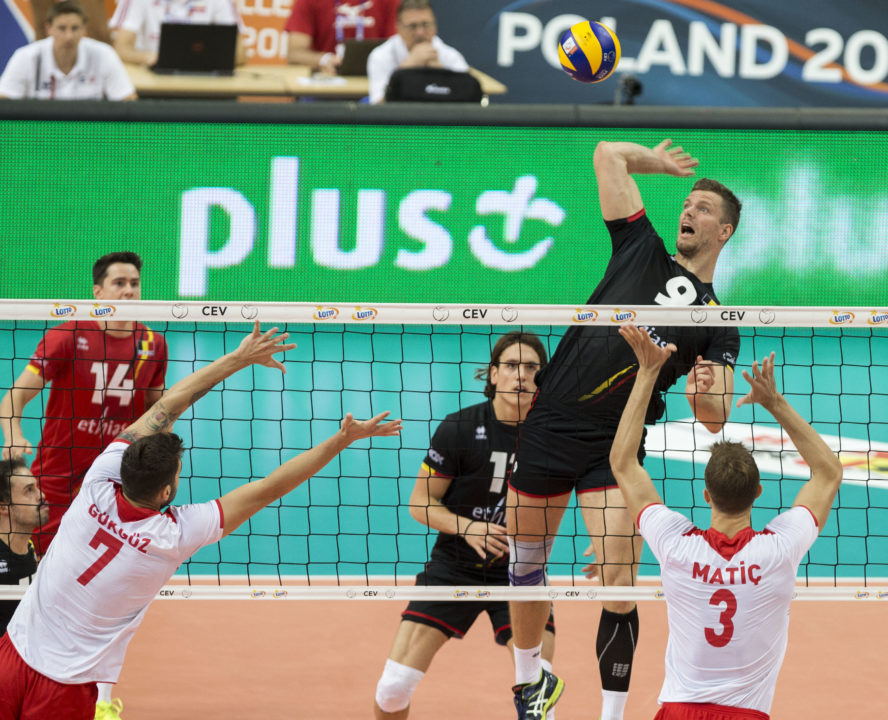 Belgium's Pieter Verhees (#9, black) injured his ankle in the team's match against the Netherlands on Monday. Current

Belgium found certainty about who their quarterfinal opponent will be on Thursday at the 2017 European Volleyball Championships – Italy beat Turkey 3-0 in their playoff match on Wednesday.

But the Belgians remain uncertain about whether star middle blocker Pieter Verhees will be available.

“I came down wrong on my ankle,” Verhees said. “All last year, I was never injured, and now, at a time when I was playing well in the tournament, it hits me. The doctors are doing everything possible to get me fit again, but there’s no guarantee that I can play again tomorrow.”

Belgium swept their way through pool play with a perfect 3-0 record. That included a 3-2 win over France, the defending World League champion, on the opening day in the tournament. France was eventually eliminated in the playoff round byt he Czech Republic.

But in Monday’s 3-0 win over the Netherlands, Verhees injured his ankle on landing and didn’t finish the match.

In 2+ games of play, Verhees had 8 bocks, which ties him for the 11th-most in the EuroVolley final in Poland. He also had 15 kills.

Verhees, who was twice named the best blocker of the Italian championship, plays professionally for Gi Groupa Monza – where he’s been since 2015. Before that, he played in Modena, making the upcoming season his 6th in the Italian league.

Verhees’ comments don’t indicate that the injury will be serious enough to cost him any time in Serie A, but his status for the rest of the European Championship is in doubt.