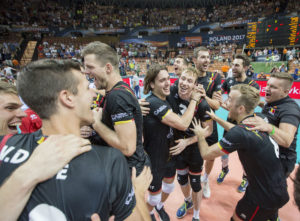 Setting Up the European Championship Semifinals

The Belgians made history, earning their first ever European Championship semifinal berth on Thursday. The team must now face fourth-ranked Russia to try to earn a podium spot. Germany and Serbia round out the semifinal field.

After Serbia and Belgium both suffered tough defeats in the semifinals, Serbia against Germany and Belgium against Russia, the last remaining goal of the 2017 European Men’s Championship for these two teams was to stand on the podium to receive a bronze medal for third place. In the end, a tough fought five set battle went the way of Serbia. Set scores were 25-17, 22-25, 19-25, 25-22, 15-12. Serbia earned their 11th overall medal at the European Championships and eighth bronze medal. Drazen Luberic led the way for Serbia with 25 points on 22 kills and 3 aces. Uros Kovacevic chipped in 18 points and Srecko Licinac tallied 16 points.

The first set started for Serbia in a similar way to how it did in the semifinals with Nikola Jovovich feeding Lisinac for a quick kill. After a Nemanja Petric ace, the score was 7-2 and Belgium had no answers early on. The Belgian squad was finally able to build a little momentum after a huge kill from Bram Van Den Dries followed by an ace from Pieter Verhees. That was quickly snuffed out by the block of Kovacevic and Marko Podrascanin, and the Serbians took an 8-4 lead into the first technical timeout. As it happens many times in men’s volleyball, momentum still had not found a permanent home and Belgium made a another mini run on a missed serve and a Kovacevic hitting error. However, Serbia was able to regroup, and after kills from Kovacevic and Lisinac, the lead was back to four at 10-6. At 12-8, Lisinac made an incredible dig off his shoulder that led directly to a Luberic kill, and momentum was firmly in the hands of the Serbians. The Serbian block took over midway through the set, shutting down Van Den Dries on back to back swings to bloat the lead to 15-9. Another hitting error for Belgium followed by yet another Serbian block and the lead reached 17-9 and Serbia never looked back. The first set ended the way it started with Serbia getting a quick kill out of the middle, only this time it was Podrascanin finishing off the rally.

Belgium also started set two slowly, hitting the first ball out of bounds. After Petric tooled the block with a high swing, the lead opened up to 4-1. Belgium was not out of the set though and after a scramble point that went the way of Belgium, followed by an ace and a hitting error, the lead for Serbia was down to one at 7-6. In fact, Belgium was able to tie the score at 7 before Luburic took the set to the technical timeout with a crushing kill from the back row. Belgium was able to take their first lead of the set off the right hand of Sam Deroo as Serbia, in search of answers, was forced to call timeout. The middle of the set became a battle of service errors until Luburic was finally able to break through with an ace to give Serbia a 14-13 lead. A fantastic dig from Serbian libero Nikola Rosic led directly to a Lisinac kill as Serbia was able to open a two point lead. The set was far from over, however, as Belgium scored back to back points to tie the score at 16. A triple block from Belgium followed by a back row kill from Gert Van Walle and suddenly, Belgium had won four straight points and opened an 18-16 lead. The biggest momentum swing of the set came after a long rally at 19-17. Deroo was able to tool the block to give Belgium their first three point lead of the match. Simon Van De Voorde finished the set on a quick kill down the middle.

Belgium used set three to build off the momentum they earned in set two. Their serving put Serbia in trouble, and their blocking was able to slow down many Serbian attacks. Luburic started the set with a kill but neither team was able to find any separation until Belgium took a 4-2 lead on a Petric hitting error. A huge triple block from the Belgian squad ballooned the lead to 8-4 at the first technical timeout. Lisinac was able to deny Van De Voorde on a solo stuff, but he went back to the service line and missed long, allowing Belgium to take an 11-7 lead. Deroo smashed a kill from the back row and Serbia called a timeout, trailing by five points. Another back row kill for Belgium took them the second time out up 16-12. A Van Walle offspeed kill grew the lead to 20-15 for Belgium and Serbia was forced to call their final time out of the set. Serbia tried to close the gap, winning back to back points, but a double block from Van De Voorde and Van Walle gave Belgium a comfortable five point lead yet again. Belgium finished off the set with a kill from Deroo.

Set four saw Belgium start off fast as they took an early 4-1 lead. But a kill from Dragan Stankovic and then a double block from Jovovic and Stankovich brought Serbia to within a single point. A Luburic ace and another kill from Stankovich caused Belgium to call a quick timeout. A double block from Lisinac and Kovacevic gave Serbia their first two point lead of the set at 8-6 as the teams reached the first technical timeout. A solo stuff from Lisinac followed directly by a another block from Kovacevic and Lisinac gave Serbia a four point lead at 11-7. The set was not over though as Belgium scored back to back points on a block and hitting error forcing a timeout from Serbia. A kill from Deroo, confirmed by video replay, drew Belgium even closer at 14-13. Substitute Kevin Klinkenberg fired an ace and just like that the score was tied at 14. Petric quieted the momentum with a kill and Kovacevic crushed a kill off the block as Serbia opened a 16-14 lead at the second technical timeout. At 17-15, Luburic crushed a back row kill into the face of Van Walle, who was able to shake off the play off with a smile. But as was the case all match long, momentum swung back and forth on a pendulum. Deroo fired a kill and Verhees shut down Lisinac in the middle and the Serbian lead shrunk to one. However, Serbia was able to keep Belgium at an arm’s length to end the set, highlighted by three late kills and an ace from Luburic. Serbia sent the match to a deciding fifth set on a missed serve from Belgium.

Set five started with a bang as Lisinac shut down Verhees. A Luburic kill and a double block from Petric and Lisinac grew the Serbian lead to 3-0 and caused Belgium to take an early timeout. A small bit of controversy unfolded with Serbia up 3-1. Luburic swung out and Serbia did not challenge a block touch in time. Belgium shut down Luburic on the next point to knot the set at 3. Serbia stole the momentum right back on a missed serve and triple block, highlighted by a huge celebration from Petric. Belgium had no quit in them though as a huge block from Van De Voorde brought the team to within one. A missed serve gave Serbia an 8-6 lead as the teams switched sides. Lisinac unleashed his fury on the ball, finding the face of Klinkenberg, as Serbia reached 10 first. Van Walle shut down Kovacevic to bring the score to 10-9, but once again Lisinac had the answer down the middle. Petric fired a kill off the sideline and Serbia was able to claim their two point lead back. Van De Voorde and Luburic traded kills and Belgium called for a timeout down 13-11. A mini rally ended with a Klinkenberg kill and then it was Serbia’s turn to call timeout. Petric then tooled the block to give Serbia a match point. The final rally of the match ended with Kovacevic swing finding the corner of the court.

Belgium accomplished their best ever result at the European Championships with their fourth place run. Deroo and Van Walle each scored 16 points, leading the way for the Belgian squad. Deroo scored his 16 points on 10 kills, 5 blocks and an ace while Van Walle had 14 kills and 2 blocks.