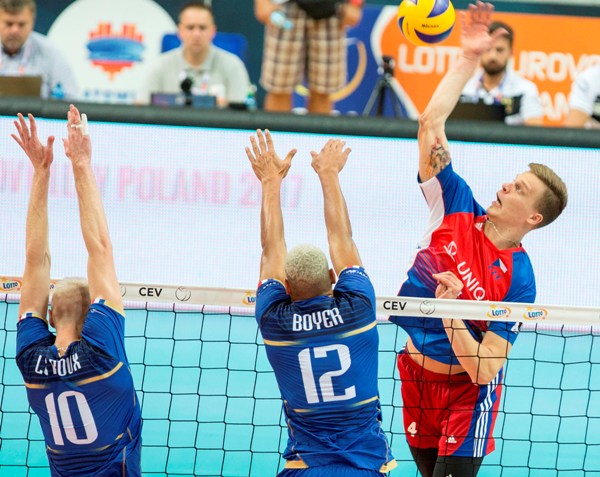 The Czech Republic bested France in four sets to move on to the quarterfinals alongside Slovenia, Bulgaria and Italy.  Current Photo via CEV

There will not be a repeat champion at the European Championships, as 2015 gold medalist France was ousted from the competition by the Czech Republic in the event playoffs. Instead the French will finish ninth.

The Czechs along with Italy, Bulgaria and Slovenia are on to the European Championship quarterfinals after playoff victories Wednesday.

In the quarterfinals, which begin at 11:30 a.m. ET Thursday, Bulgaria will take on Serbia and Germany will face the Czech Republic in the early matches. Slovenia will battle Russia and Italy will play Belgium in the 2:30 p.m. ET matches.

Video challenge was front and center in Italy’s sweep of Turkey, deciding three points in the final stanza, including two decisions which were overturned. The Italians also served up nine aces and racked up 10 blocks in the victory, while limiting Turkey to two aces and four block in the win.

“Obviously we are happy, because the victory was so important for the team and qualification for the quarterfinals was our goal,” Italian coach Gianlorenzo Biengini said. “The third set was the most difficult one for us, because the Turkish team won several points in a row and we had to chase them. Luckily for us, we were able to win also the last set. Of course, the challenge system helped us very much. Today we used it in very important moments, but it is also helpful not only today as referees can stay calm and judge well in the crucial moments of the match.”

Five aces lifted Italy to a 25-16 Set 1 victory. Simone Giannelli posted two perfect serves as the team took a 17-10 advantage, then Daniele Mazzone added one more to seal the stanza.

Turkey boasted a short-lived 8-7 lead in Set 2, but Italy turned the tables with a 9-0 run as Mazzone led the way from the service line. Matteo Piano chalked up five blocks and Luca Vettori aided the offense as the Italians cruised to a 25-17 win.

The Turkish side came out on fire after the intermission, going ahead 17-12 and eventually 24-21 to put pressure on the Italians. Biengini’s team was up to the task, knotting the score at 24 with help from a video challenge. Turkey thought they had won it soon after, but another video challenge kept the match going. Not to be outdone, Turkish coach Josko Milenkoski utilized a video challenge as Italy earned its first match-point chance. Milenkoski was denied and eventually the Italians sealed the 31-29 win on an Oleg Antonov putaway.

Vettori led all scorers with 14 points for Italy, with 13 kills and an ace, followed by Filippo Lanza‘s 13, which included 11 kills and two aces.

Metin Toy paced Turkey with 12 points, tallying 10 kills, a block and an ace.

“We started the match with big respect towards the Italian team. Perhaps we lacked enough confidence that we could win against the Olympic silver medalists,” Milenkoski said. “We had difficulties in reception, which eliminated our middle blockers from touching the ball often enough. We had big chances in the third set and I cannot remember how many sets we lost this way in the past. We had a few set points and who knows what would have happened from the fourth set. I think my team can still be satisfied with this result, as this is the best result Turkey ever achieved at the European Championship.”

After dropping the first set, Bulgaria charged back and overran Finland with a tough serve, stout block and efficiency offense en route to a four-set win and quarterfinals berth.

“We played very well,” Bulgarian outside hitter Nikolay Penchev said. “The first set was a little nervous for us, but everyone knows how important the game was for both teams. At the beginning we made a lot of mistakes, in the serve for example, but in the next sets we concentrated 100% and we played better.”

Finland overcame an early 8-6 deficit in Set 1 to take a one-point lead at the second timeout (16-15), before carrying on to a 25-23 victory. Thirteen Bulgarian errors, including a service error which clinched it, helped the Finnish cause in the stanza.

Bulgaria built a four-point lead by the midway point of Set 2 (16-12) and held Finland at bay the rest of the way. The Finnish cut the margin to one at 17-16, but the Bulgarians held on to win it on a Rozalin Penchev kill.

Sets 3 and 4 were dominated by the Bulgarians, which jumped out to big leads and never looked back. Offensive efficiency was the key in the victories as Bulgaria hit at a 68 percent clip in Set 3 and 77 percent in Set 4. The team also capitalized on the block and from the service line, managing six blocks and six aces in the final two stanzas en route to the quarterfinals.

“I think that we came into the game like we had to, we had a very strong physical opponent, so we played very intelligently in attack, we were serving, defending and receiving well,” Finnish coach Tuomas Sammelvuo said. “The first two sets were like this, but later we started to lose the game – in serving and reception.”

Slovenia ousted the homestanding Polish side, besting them in all phases of the game on Wednesday.

Alen Pajenk (13), Alen Sket (13) and Mitja Gasparini (10) were the top scorers for Slovenia. Sket tallied a team-best 11 kills and two aces, while Gasparini downed nine putaways. Pajenk put up a team-leading six blocks, to go with his six kills and an ace.

Poland led 11-8 in Set 1 with help Bartosz Kurek‘s serving and captain Michal Kubiak’s offense, but Slovenia caught up at 13-all, before grabbing a 15-14 lead of its own. Poland regained the edge at 21-20, but gave up five-straight points to fall 25-21.

Slovenia utilized its block well in Set 2 en route to a 12-9 advantage. Poland responded to tie it up at 15, but the Slovenians scored five of the next six to pull away before closing out the 25-21 win on an Tine Urnaut kill.

The teams played to an 8-all tie in Set 3 and remained closed until three straight points gave Slovenia a 16-11 lead at the second timeout. A pair of aces pushed the advantage to seven at 21-14. A Pajenk putaway sent the Slovenia’s through the quarterfinals and ousted Poland from the Euro Championships for the second straight time.

France committed 33 errors in a four-set loss to the Czech Republic, knocking the defending champs out of the competition.

“We played well in our last pool match against Italy and we showed an even better level against France,” Czech coach Michal Nekola said. “Of course, we felt respect for the current World League champions, but thought of it as a challenge to play a great team, rather than a difficult task.”

Michal Finger and Donovan Dzavoronok starred for the Czechs, turning in 19 and 15 points respectively. Finger accounted for a match-high 18 kills, while Dzavoronok added 13 kills and a team-best two aces. Marek Beer chipped in a team-leading three blocks.

Stephen Boyer did his part for France with a match-high 20 points, tallying 17 kills, two blocks and an ace, but didn’t get much help. Next on the team in points were Thibault Roussard (9), Trevor Clevenot (8) and Kevin LeRoux (8).

Finger and Dzavoronok racked up six points apiece in Set 1 to give the Czechs a 21-17 lead. France rallied to tie the score at 21, but could not stop a late 4-0 run which closed out the stanza.

The teams were level at 20-all late in Set 2, but the French evened the match with five of the final six points.

Boyer managed 10 points in Set 3, but could not lift France to a victory. After trailing by three early, the Czechs seized a 21-18 advantage and rode out a late French rally as Finger took control offensively.

The French committed 10 errors in the final stanza, helping punch their own ticket home.  The Czechs also put up three blocks in the final stanza. Five players scored three points each to win the set and put the Czech Republic into the quarterfinals.

We played very badly,” France’s Jenia Grebennikov said. “We missed lots of chances to score a point. We missed serves and attacks and we were really awful at reception. We did not play like a team. Instead we played like individuals. That is why it was difficult for us to win this game. The Czech Republic did not play very well, but we were even worse. Unlike us, they played like a team.”