Pool C: USA and Russia Qualify for 2nd Round at Worlds 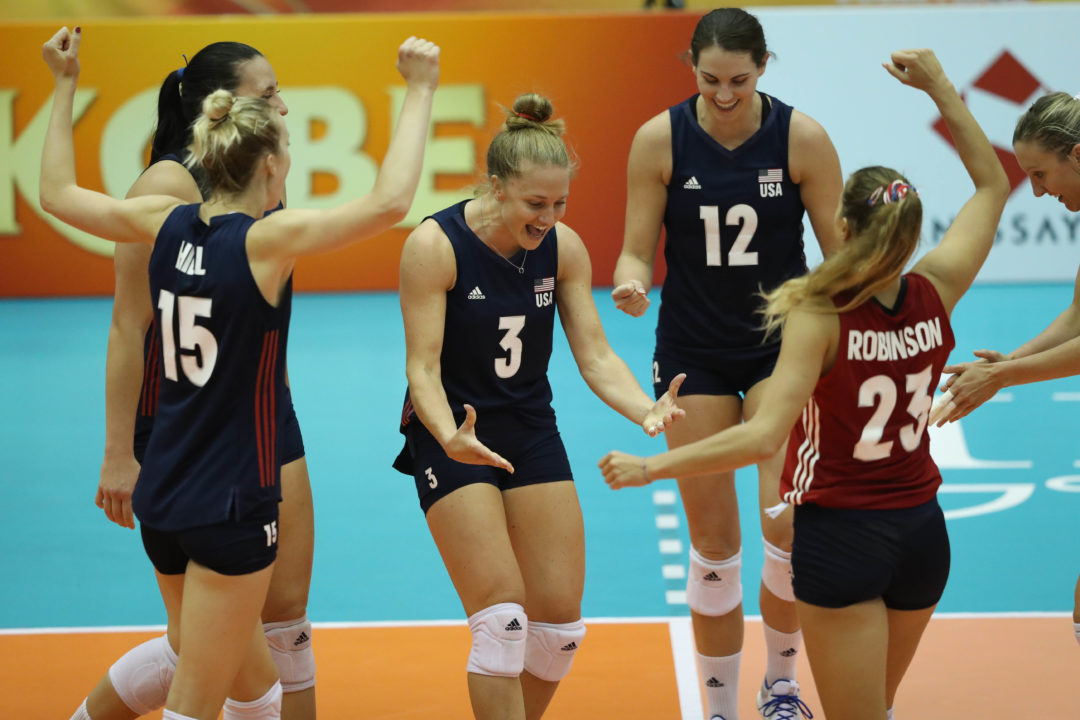 With Tuesday victories, 5th-ranked Russia and 2nd-ranked USA qualified for second round action at the 2018 FIVB World Championship. 16th-ranked Thailand also notched a win, overcoming a key injury to get past Trinadad and Tobago in 4 sets. Current Photo via FIVB

With Tuesday victories, 5th-ranked Russia and 2nd-ranked USA qualified for second round action at the 2018 FIVB World Championship. 16th-ranked Thailand also notched a win, overcoming a key injury to get past Trinadad and Tobago in 4 sets.

“Our team and Azerbaijan have a close relationship because we have played each other so many times in European competitions,” Russia head coach Vadim Pankov said. “Azerbaijan is a strong team with a great serve and we needed a bit of luck at the end of the first set.”

The Russians were strong on the block, outdoing Azerbaijan 11 to 9, and took advantage of a sloppy 21 errors by their opponent to earn the victory and move to 3-0 in Pool C standings.

Azerbaijan was paced by Polina Rahimova, who posted 19 points in the match. Odina Aliyeva added 8.

“It was a very difficult game because Trinidad and Tobago has a lot of physical strength and a lot of height in the team,” Thia team captain Thinkaow Pleumjit said. “Sometimes we found it very difficult to hit spikes because of their high block system. In the fourth set, we could find our own style again.”

To earn the win, Thailand out performed its opponent in blocks (12 to 7) and service aces (11 to 5). A total of 26 errors stalled Trinadad and Tobago’s upset bid.

Just before Trinadad and Tobego earned the win in the third set, Thailand opposite hitter Pimpichaya Kokram exited the match with an injury to her right knee. She was taken to the hospital for evaluation in a wheelchair, but Thailand head coach Danai Sriwachamaytakul was optimistic after the match.

“It was a tough game because the Trinidad and Tobago players have a big physique and are very tall and strong,” Sriwachamaytakul said. “Our defense found it hard against their attack. After the third set I thought Trinidad and Tobago looked a bit tired. Our No. 16 (Pimpichaya) will go to the hospital tonight to check her knee injury but we don’t think it looks serious.”

Krystle Esdelle and Channon Thompson registered 15 and 14 points, respectively, for Trinadad and Tobego, which is making its first-ever appearance at the FIVB World Championship this year.

2nd-ranked United States recovered from a slow start to earn a 4-set victory against 10th-ranked South Korea to move to 3-0 in Pool C competition at the 2018 FIVB World Championship Tuesday.

With 2 matches remaining, the Americans have already clinched a spot in the 2nd round.

“It is exciting,” said U.S. captain Jordan Larson on the U.S. qualifying for the second round. “It is one of our goals to continue through this tournament and be here for a long time. But we still have two matches in the first round, so I think it is important for us to keep getting better and focus on those two matches.”

Though South Korea held the edge in blocks (10 to 8) and service aces (8 to 7), it was not enough to dethrone the USA, who were led to victory by Kelly Murphy’s 18-point performance. Rachael Adams also contributed 14 points.