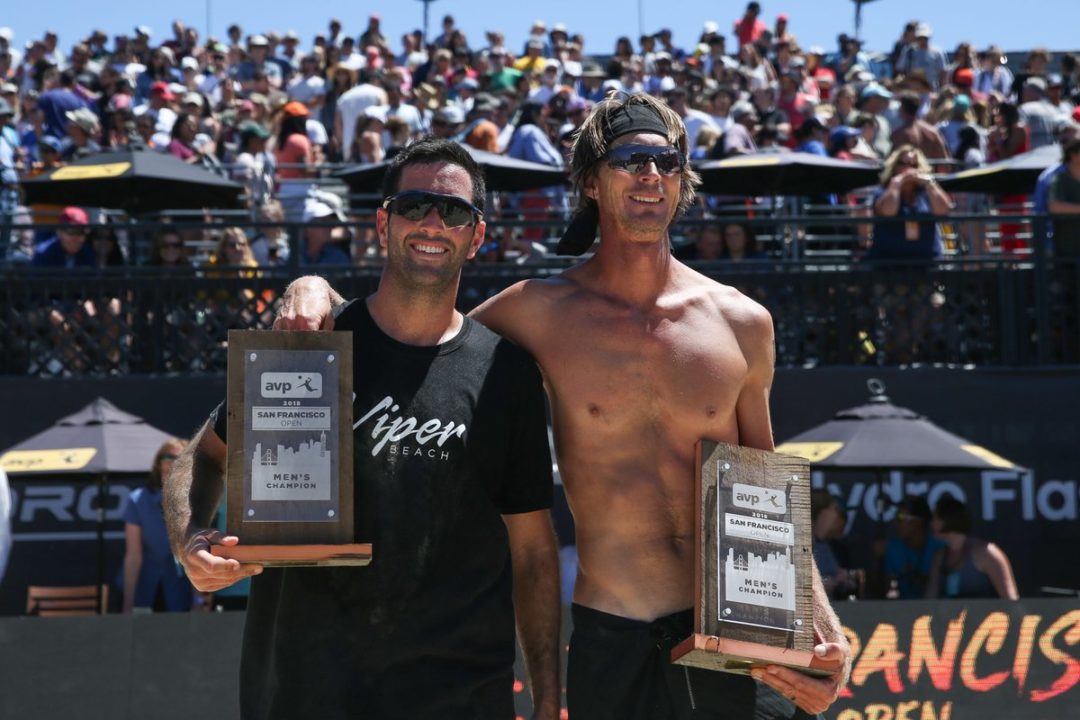 After 18 years in the pro ranks, Ed Ratledge earned his first AVP title at the San Francisco Open alongside partner Roberto Rodriguez. On the women’s side, the tournament's No. 1 seed Emily Day/Betsi Flint played won their second straight AVP title. Current Photo via AVP

After 18 years in the pro ranks and 140 events, Ed Ratledge earned his first AVP title at the San Francisco Open alongside partner Roberto Rodriguez.

The duo won five straight matches, remaining in the winner’s bracket throughout the weekend, en route to the title. The No. 6 pair made their way to the semifinals with three wins, including an tiebreak upset of  No. 3 Trevor Crabb/John Mayer in Round 2.

Once into Sunday’s matches, Ratledge/Rodriguez ousted top seeded Billy Allen/Ryan Doherty 21-12, 21-17 in the semifinals before claiming the trophy with another straight set win, this time against No. 5 seed Chase Budinger/Sean Rosenthal (21-15, 21-18).

Ratledge had not finished higher than fifth place at an AVP event, doing so six times, while Rodriguez’s previous best effort was third place at Hermosa Beach 2017.

A special moment here at the #AVP2018 SF Open! Congrats to @EdRatledge and @Rafu93 on winning their first-ever #AVP Championship, beating Rosenthal/Budinger 21-15 & 21-18. After 18 years on tour, this trophy is better than Ratledge could have imagined.
📸 : @AGamePhoto pic.twitter.com/z9LoKSV8Ix

Against Allen/Doherty, Ratledge racked up 22 kills, including 13 in Set 2, and five blocks, while Rodriguez chipped in 14 kills, 12 digs and two aces. Allen hit just .118 in the match with 12 kills and eight errors, to go with his nine digs. Doherty managed 11 kills, two aces and two blocks, while hitting .667 in the loss.

In the final, Ratledge notched 14 kills, including eight in 10 swings in Set 1, while Rodriguez turned in a double-double with 11 digs, 10 kills and four aces. Rosenthal countered with 13 kills and 10 digs, while Budinger tacked on 10 putaways. Eight service errors also plagued the duo.

Got a trophy and a new skateboard this weekend, pretty stoked @avpbeach

On the women’s side, the tournament’s No. 1 seed Emily Day/Betsi Flint played won their second straight title, following the Seattle Open, after fighting back through three contender’s bracket matches.

On Sunday, Day/Flint faced off with the team that put them in the contender’s bracket with a second round loss (22-20, 18-21, 15-12), No. 8 Brittany Howard/Kelly Reeves. The pair avenged the loss with a 21-14, 21-13 victory to move on to the championship match. Flint and Day registered 13 kills apiece in the victory, while Day added three blocks and Flint chipped in two aces.

On the other side of the bracket, No. 2 Alix Klineman/April Ross faced No. 4 Caitlin Ledoux/Geena Urango. Pitting Ross against her partner from the Seattle Open, Ledoux. Ledoux/Urango won in straight sets 21-19, 21-15 as Urango carried the load with 15 kills and Ledoux managed four stuffs.

In the final, Day/Flint struck first with a 21-17 win, but Ledoux/Urango countered with a 21-16 victory of their own. Day/Flint hung on for a 15-7 win to clinch the title. Flint paced the team with 19 kills and eight digs, while Day tacked on 16 kills, five blocks and two aces. Ledoux matched Day with five stuffs and two aces, while Urango put up a team-best 13 kills, but hit just .211.

We did it!! Wasn’t always pretty but we stuck together and won AVP San Fran. Betsi was a vacuum on defense!! HUGE thanks to everyone who had our backs from #EmsEntourage to #TeamHustle to #BetsisBunch and all our SF fans 🙌🏼 What a tournament!! #allBetsonDay #alldayeverday @xerosolar @lagoaswimwear @traderjoes