Russia And Italy Move On To #EuroVolleyU19W Finals 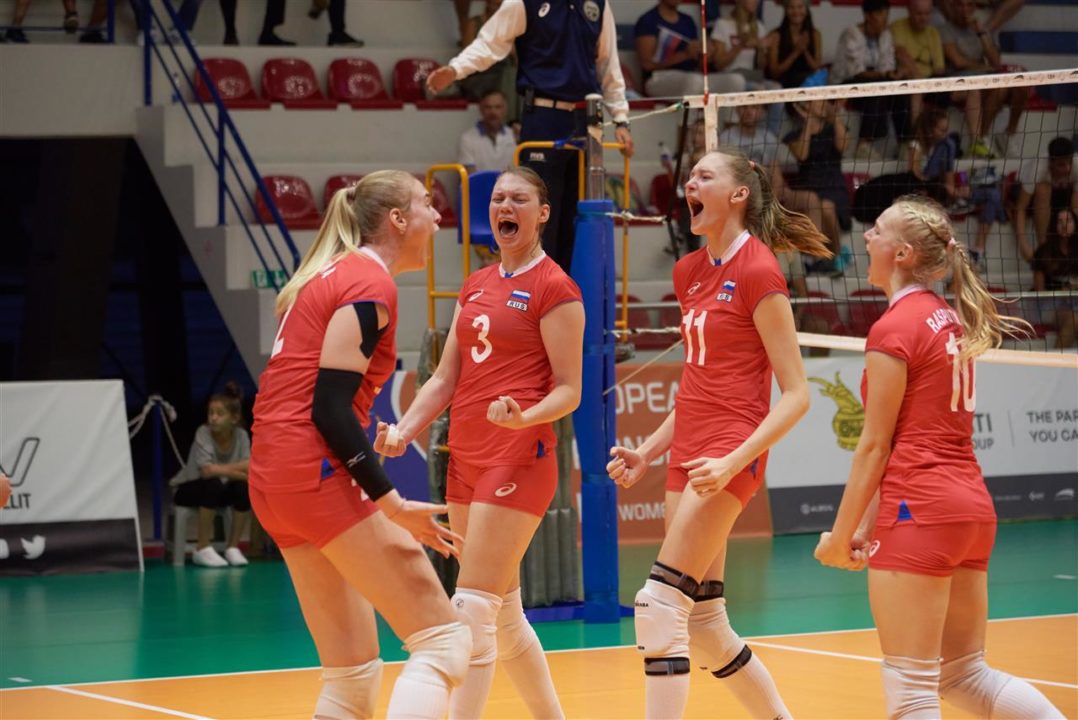 Russia and Italy will move on to play for gold at the #EuroVolleyU19W. It couldn’t have been any other way, as both teams completely outclassed its opponents since pool play. They were simply on another level, and tomorrow they’ll have the chance to prove who is the best of the best. Here is the day’s recap:

This game had three distinct phases. Italy completely dominated the first set, Turkey completely dominated the second set, then both teams kept it very even for the last two frames. Luckily for Italy, it had more grit to end up closing the game 3-1 at the end. Valeria Batista came up big for Italy, leading the way with 16 points, while Ilkin Aydin had 20 points in the losing effort. Even though Turkey outblocked Italy 14 to 8 in the game, it only hit 34% from the field as a team while the Italians hit 43%, which ended up making all of the difference.

Massimo Bellano, Italy’s head coach: “Half of the mission is completed, but we played a very good first set, too good to be true, maybe. In the second set we showed a terrible game, but I think we are neither the team of the first set, nor the team of the second one. I think that the play that we showed in the fourth set is the closest to what we are as a team. But I am happy, for the girls, for all of them, they gave everything and we won. But if we are to win in the final, we will have to give something more than everything.”

Sahin Catma, Turkey’s head coach “We did not hit the ball hard enough, we did not attack well. We did not play well up to the 20th point, the spikers didn’t kill the ball, didn’t kill the game. Italy, on the other hand, outclassed us in the critical moments of the game and thus won it. Tomorrow we will aim to do what we didn’t do today and win the bronze medal at least.”

This game was an all out war, as neither team was willing to wield an inch of court space to its opponent. The Polish team started better, winning the first set, but succumbed to the Russian team in the next two. After mustering up all of its strength to force a tie break, the Polish team suffered a heart-breaking 17-15 loss. Valeriya Shevchuk led the way for Russia with 20 points, while Magdalena Stysiak scored a whopping 34 points in the losing effort. Poland outhit and outblocked Russia for the game, which makes the defeat even more stinging.

Alexander Karikov, Russia’s head coach: “We prepared ourselves for a difficult game, but somewhere, somehow I made a mistake with my starting line-up. But you can never predict how your players will react. Anyway, in the fifth set, my team showed character coming back and I want to thank them.”

Ireneusz Waleczek, Poland’s head coach: “It’s a pity, because every time when we played in attack, we won the point, but we made too many mistakes and Russia punished us for this. In the tiebreak, we did not manage ‘to kill’ the game and we let them come back into it. We made many mistakes in the end, we didn’t attack strongly. However, the team did great tonight. Now we will prepare for the bronze medal match tomorrow.”