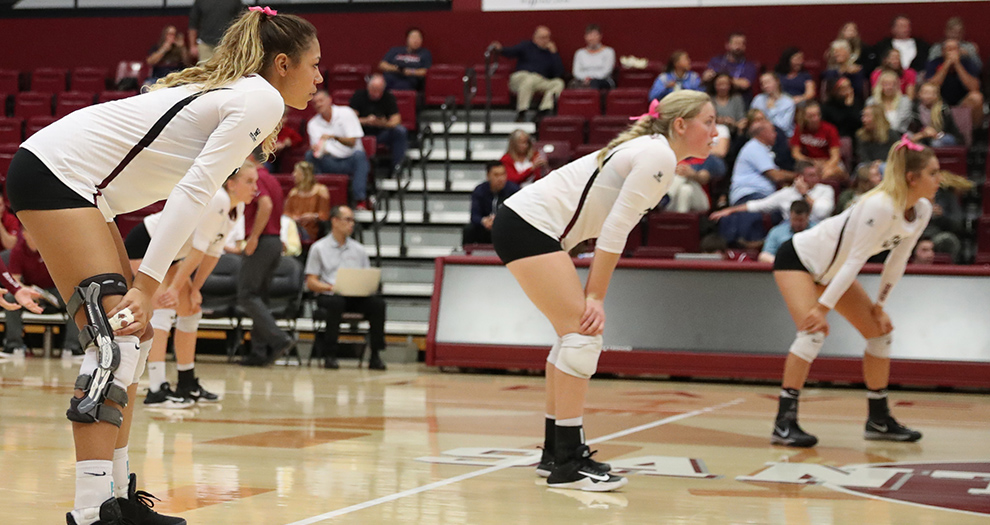 In a five-set match that went down to the wire and saw the first four sets decided by three points or less, it was Set 3 between Santa Clara and Saint Mary's that will go down in the record books at 46-44. Current Photo via Santa Clara Athletics

In a five-set match that went down to the wire and saw the first four sets decided by three points or less, it was Set 3 between Santa Clara and Saint Mary’s that will go down in the record books.

It was in that set that the Broncos scored an NCAA record 46 points to eek past the Gaels (46-44). Santa Clara could have finished it off after earning the first set-point try at 24-23, but it was not to be as the teams would go on to combine for 21 set-point attempts before the Broncos sealed the 46-44 win.

After splitting the first two sets, the teams traded points over the first 10 points of Set 3, before Saint Mary’s pushed ahead by five at 16-11. Three Sienna Young kills and five Bronco errors gave the Gaels the advantage. Two kills by Allison Kantor and two Taylor Odom blocks brought Santa Clara within one at 16-15. Later, trailing 21-18, Michelle Gajdka came through with a pair of kills to knot it at 21. Gajdka added another kill and an ace to turn a 23-21 deficit into a 24-23 lead for the Broncos. Young thwarted that attempt and Madi Wilkerson added an ace to give SMC its first try at 25-24.

The Gaels called timeout down 27-26 and after kills by Morgan Hughes and Lindsey Knudsen had the upper hand over the next several points with five set-point tries, last at 32-31. Jensen Cunningham and Odom notched putaways to give Santa Clara another shot at 33-32. Three St. Mary’s tries followed, then two by the Broncos. The Gaels had five tries from 39-38 to 44-43, but kills by Odom, Hailey Lindberg and a stuff by Lindberg and Cunningham finally stole away the 46-44 win for Santa Clara.

Santa Clara scored 46 points, the most in a single set since the 25-point rally scoring era began in 2008. It is also the second most in NCAA history, behind a 48-point tally by Georgia Tech against Minnesota back in 2004, during the 30-point rally-scoring era.

The 46 points match the Division III 25-point rally scoring record, which was set by Millsaps against Birminham Southern on Nov. 8, 2013.

NCAA RECORD | After checking the @NCAA record book, the 90-point third set that the #SCUBroncos won 46-44 over @SMC_Volleyball is the longest set in NCAA history during the 25-point rally-scoring era (2008-present)! #StampedeTogether #SCUBroncos

FINAL | Wild match goes to @SMC_Volleyball as the Gaels win the deciding set 15-11 over the #SCUBroncos #StampedeTogether pic.twitter.com/NQyshiBW4p

Santa Clara volleyball finished the 2017 campaign by making NCAA Division I history on Tuesday night. The team scored 46 points against Saint Mary’s in the third set, the most in a single frame in the 25-point rally-scoring era (2008-present).

Santa Clara’s 46 points is also tied for the second-most in a single set in NCAA history. Georgia Tech scored 48 in a single-set against Minnesota during the 30-point rally-scoring era in 2004.

The Broncos had the first crack at set point in the third at 24-23, and had a total of seven set points while fighting off 14 set points for the Gaels. Michelle Gajdka tallied 10 of her match-high and career-high 23 kills in the set.

Hailey Lindberg had a hand in the last two points of the stanza, coming through with a kill and combining with Jensen Cunningham for a block on Lindsey Knudsen’s attack attempt. There were 27 ties and 13 lead changes in the frame, compared to 13 ties and two lead changes in the other four sets combined.

Gajdka hit .327 and added 12 digs for the 10th double-double of her sophomore season. Allison Kantor had a 20-kill, 15-dig double-double — her sixth in the team’s last seven matches. Kirsten Mead logged 60 assists to reach that mark for the fourth time this season and added 13 digs for a double-double. Taylor Laugeroand Tessie Powers tied for the team lead with 17 digs each.

Sienna Young hit. 415 and turned in 21 kills to lead the Gaels. Sarah Chase posted an 18-kill, 12-dig double-double and Madi Wilkerson led all players with 22 digs.

Santa Clara hit .379 in the initial frame, during which Gajdka, Kantor and Lindberg had four kills apiece. They set the tone right from the opening serve, as Laugero delivered an ace that sparked an 8-1 run. The Gaels stormed back into the set with an 8-2 stretch that cut the Santa Clara lead to 23-21 before Gajdka and Kantor produced two kills in three points to give the visitors the early edge.

Saint Mary’s won four straight points to start the second frame en route to a 6-2 lead. Santa Clara knotted the set at 18- and 19-all before the Gaels took six of the last nine points to tie up the match heading into intermission.

Following the record-setting set, Santa Clara claimed the edge in the fourth by winning four points in a row to start a 10-4 spree that put the Broncos in front 17-11. Kantor had the last two kills during that stretch. Saint Mary’s followed up with a 4-1 run that led to winning 15 of the last 22 points to force a fifth set. Chase had the most productive frame by a Gael outside of the third set with six kills.

In a matchup dictated by offense, Saint Mary’s saved its best for last. The Gaels hit .438 (9 K-2 E-16 TA), including four kills by Chase, to close out the night. Chase had two kills and an ace to help Saint Mary’s take a 5-2 lead and the Broncos came within one point at 12-11 before the Gales scored three straight — including a match-clinching ace from Wilkerson.

• The third frame ran 32 points longer than Santa Clara’s previous longest set of the season, when the Broncos took the first stanza from Pepperdine 30-28 on Nov. 9.

The record-setting third frame featured 27 tie scores and 13 lead changes. Saint Mary’s held set point 15 times and Santa Clara held it seven, finally winning it on a block from Jensen Cunningham and Hailey Lindberg. The teams combined for 60 kills, 52 assists, 49 digs, eight blocks and four service aces in the set. Both teams hit over .300 in the third, with Santa Clara leading the way at .343.

It looked as though the momentum had shifted to the Broncos in the fourth set after such a long battle, as they got out to a 17-11 lead. But SMC wasn’t finished. The Gaels outscored Santa Clara 11-4 after trailing 20-15, including scoring five of the last six points to even the match with another extra-points set at 26-24. Consecutive kills by Morgan Hughes and Sarah Chase sent the match to a deciding fifth set.

Santa Clara led the deciding set 1-0 and 2-1, but the Gaels scored four straight points on another Chase kill, an ace from Chase and two Santa Clara attack errors, and never trailed again. Senior Madi Wilkerson, playing in the final match of her SMC career, served for the last two points, sealing the match with what was her fifth ace of the night.

Three other Gaels had double-digit kills. Sarah Chase recorded her second double-double of the year with 18 kills and 12 digs. Lindsey Knudsen and Morgan Hughes both had 14 kills.

Alexsa “Crash” Parker recorded her 10th double-double of the season with 37 assists and 17 digs. Fellow setter Mary Hernandez also had a double-double in the final match of her SMC her career, tallying 28 assists and 12 digs. Wilkerson had a match-high 22 digs.

Rob Browning BITES
“It was a fabulous match. They were a very good team, they played really well throughout the match and made it very tough on us. Santa Clara withstood good serving by us. Coming out of a crazy third set and being down in the fourth, to come back showed a lot of toughness from our team. I was impressed. In fact, I think they showed more toughness than I thought they had. They stepped up and continued to fight and execute.”

“I think that we have been better all season than our record indicates. Our conference is extremely tough. I think we have battled against some of the top teams in the country and weren’t consistent enough. Tonight was better because it showed more consistency. But the thing about tonight was in spite of the lows we have had and the loss in the third set, I think we are better at the end of the season. We have played really well and it has been a tough road.”

“I am looking forward to beach season. It is great that we have that because then we don’t have to wait until September to compete again and to represent Saint Mary’s. We have a very good team and we are all excited about it. I know the girls are excited and looking forward to it.”

Sienna Young
“I’ve never played so many points in volleyball ever. The third set was crazy. I didn’t even know what to think.”

“We started slow in the first set, we weren’t hitting very hard. But everyone brought it throughout the game and started swinging super hard. Lindsey Knudsen killed it tonight. Our blocking was awesome, the middle blockers did a great job. No one was swinging scared and that really helped us.”

“This will be my second beach season, and I am excited to get better this year.”