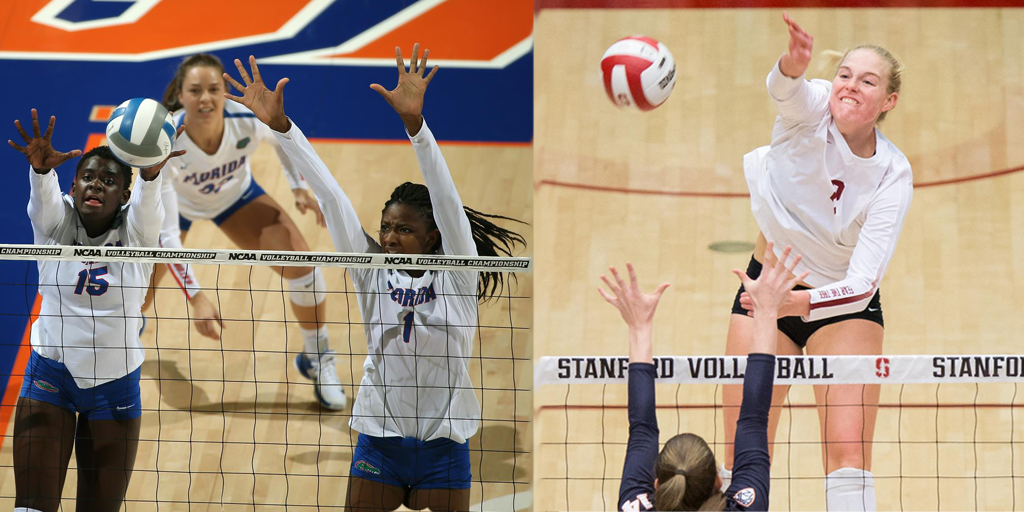 Scouting the National Semifinal between #2 Florida and #3 Stanford for a shot at the title. Archive Photo via Florida Athletics & Stanford Athletics/Al Chang

The second semifinal of the night features the SEC and Pac-12 champions going head-to-head in the Sprint Center with a spot in the National Championship match on the line.

The two teams have plenty of similarities, as both sides are strong blocking teams with great liberos and balanced offenses. It’s a big opportunity for two head coaches too, as Kevin Hambly is looking to make his mark as the first year Stanford head man while Mary Wise is looking to be the first female head coach to win a National Championship in the sport.

It’s a meeting of opposite ends of the country too, with plenty of high stakes. Let’s take a dive into some details of each team’s success and what will be key in earning a Final Four victory to advance to the title match.

At this point in the season, two players have emerged as favorites for the National Player of the Year award. One is Simone Lee at Penn State, but the other is Stanford’s own in Kathryn Plummer, who may indeed have the edge for the award. In total for the year, she’s averaged 4.73 kills per set while hitting .323 to go with 1.93 digs per set, 0.75 blocks per set and 0.36 aces per set. She’s the rare unicorn of being a 6’6″ outside hitter that can play six rotations and do it all well.

Having a transcendent talent like Plummer gives the Cardinal the best player on the court and a go-to option for when Stanford is in a pinch and needs a point. It also gives them a seemingly unstoppable force, as when everything is in system her height, smarts and power allow her to disregard or avoid the block. In big time moments and matches when the going gets tough and the pressure ramps up, having that type of player can lead a team and be a calming force in addition to opening things up for others. She did it last year too with 33 kills (4.13 per set) and 20 digs (2.5 per set) in Stanford’s National Semifinal and Final match.

With all of the offensive firepower that Stanford has, it can be easy to underrate their defense. Make no mistake though, they have plenty of playmakers on this end as well. Maybe none stand out more on that end than Morgan Hentz, the sophomore libero for the Cardinal. She averages 4.04 digs per set – solid but not unworldly numbers – but that comes with teams purposely avoiding her. That wasn’t the case last year in the Final Four, when she averaged 6.75 digs per set in the two matches. When she does get a chance at a shot, it’s usually going to pop up with a strong pass. Beyond that, there may not be a better libero in the game at reading tips and covering them up.

Overall as a team, Hentz is a good representation of the team’s low digs per set numbers as well. That can easily be explained with their high rate of termination on kills, blocks and aces. Therefore they aren’t in a lot of rallies, but from a passing standpoint and keeping balls off the court they are still a solid overall defensive unit. That mixes well with their dominant blocking bunch, as Audriana Fitzmorris (1.51 blocks per set), Tami Alade (1.44 blocks per set) and Merete Lutz (1.01 blocks per set) lead the way. Throw in Plummer and Jenna Gray as a setter, who at 6’1″ can hold her own in blocking with any other setter in the country, and Stanford has playmakers everywhere on defense.

You don’t get to this point in the NCAA Tournament without being good on offense and defense, but the Gators best aspect is indeed the defense. They do it in every way possible as well, which is a similar characteristic to Stanford but the Gators defense seems more adept to play in long rallies. Libero Caroline Knop leads that back row with 4.53 digs per set, but Carli Snyder (3.31 digs per set), Paige Hammons (2.26 digs per set) and Allie Monserez (2.23 digs per set) all pitch in plenty.

What helps the back row’s success too though is the action at the front of the net. Florida has an elite blocking bunch that beyond getting roofs slows down plenty of swings with block touches. Senior middle blocker Rhamat Alhassan has been doing it for years in Gainesville, and leads the way averaging 1.75 blocks per set, the best mark in the entire country. It’s not just a one woman show either, as the Gators boast Cheyenne Huskey (1.10 blocks per set), 6’8″ Rachael Kramer (1.06 blocks per set) and Shainah Joseph (0.78 blocks per set) next to the nation’s best blocker. They do have a bit of a blocking weakness when Snyder gets to the front of the net, but having great defensive middles like Alhassan and Kramer help cover it up.

Just like the defense has balance, the offense shows plenty of options to toss the ball too. That goes for different positions on that court as well. For instance, Shainah Joseph had a huge output against USC with 15 kills while hitting .317 yet on the season she is fourth on the team in kills per set. With her at one pin and Carli Snyder, the team’s leader in kills per set (3.44), Florida can trust both sides.

The dynamic part of the offense though may be their great middle blocker play on slides and just straight out of the center of the offense. Kramer (2.75) and Alhassan (2.69) rank second and third on the team in kills per set and are hitting .429 and .399 respectively. Plenty of teams have one middle blocker who can excel on offense, but with Florida having two they seemingly have a legit offensive option in every rotation. It also makes them unpredictable, which will be crucial to overcome a strong Stanford block.

How does Stanford beat Florida?

The Gators had some issues in serve reception in the Regional Final against another Pac-12 team in USC which almost caused them to lose the match. If the Cardinal can have an aggressive and accurate serving match, they’ll be able to keep that balanced Florida offense out of system, making them more predictable. And if they become more predictable, that plays right into the hands of the powerful Stanford block.

How does Florida beat Stanford?

This is the inverse of Stanford’s key to winning the match. Both teams are exceptional in attack and in blocking, so that likely makes serving and serve reception the X-Factor. The Gators got out of sorts at time against USC and fell behind, but were able to pick things up late. They’ll need to be better in this one to stay in system, because otherwise they will have more difficulty hitting over, quickly past or tooling the Stanford block. Beyond that, if you’re out of system you’re more prone to tip, and the Cardinal have the ‘human tip eraser’ in Morgan Hentz.