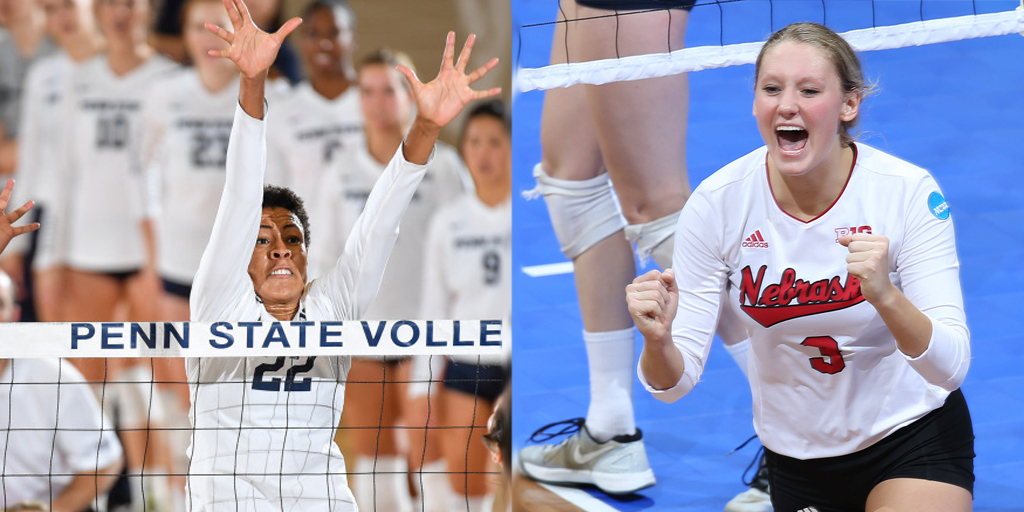 Scouting the National Semifinal between #1 Penn State and #5 Nebraska for a shot at the title. Archive Photo via Scott Bruhn/Nebraska Communications & Penn State Athletics

In the first National Semifinal, #1 Penn State and #5 Nebraska meet for a spot in the National Championship match on Saturday. It’s essentially a postseason Big Ten title match that we never got as the two schools shared a conference crown – although the Cornhuskers got the automatic bid since they won head-to-head between the two.

In that first meeting, Nebraska was coming off a 7-3 non-conference and had slipped a bit in the rankings. Penn State was soaring after two non-conference wins over Stanford and an undefeated start. That was when the tide turned for Nebraska though, who went into University Park and swept Penn State. The previous meeting went the Cornhuskers way too, as Nebraska overcame Penn State match point and a 2-0 set deficit to down the Nittany Lions in the 2016 Regional Semifinals.

This one has a bit higher stakes though, as it comes as not just a de facto Big Ten championship match, but also comes in the Final Four. Let’s take a dive into what makes both teams tick and their recipes for success against each other.

It’s not too difficult to find Final Four experience when this is your third straight appearance in the National Semifinals, but Nebraska actually has plenty of young pieces this year. Rounding out some of that youth though is experience and players with long lists of accolades and career statistics. Some of those players have performed at a high level at this late point in the postseason as well, as the Cornhuskers boast six players with experience playing this late in the year.

Leading that regard is Mikaela Foecke, who was the NCAA Championship’s Most Outstanding Player when the Huskers took the title in 2015. In her three Final Four/National Title matches, Foecke logged 4.4 kills per set while hitting .343. Kelly Hunter, the Big Ten Setter of the Year, has also been at the forefront of success at this stage with 12.6 assists per set in those three. Additionally, Kenzie Maloney and Annika Albrecht were in different roles, but played in all 10 of Nebraska’s sets in the last two years’ worth of National Semifinals/Finals. The other two with experience are DS Sydney Townsend, who has also appeared in all 10 of those sets, and MB Briana Holman, who had nine kills last year.

Nebraska fans have the easiest road to Kansas City and the Final Four, and after seeing what fans of Big Red did at the Omaha Final Four in 2015, plenty of people will be taking off work for an extended weekend. Not only do they have just about a three hour drive, but the Nebraska faithful are great at traveling and crowd attendance regardless. Not to mention plenty of Nebraska fans and alumni live around the Kansas City area.

It won’t be exactly a home match for Nebraska from a feel perspective, but from a numbers standpoint they should have more fans in the stadium than a home match. And if it’s even a semblance of their home court environment, that’s a pretty good sign for the Cornhuskers who went 17-0 at home this season behind a crowd that makes runs and big plays even more imposing.

Penn State has one of the best attackers and players in the entire country in Simone Lee, a 6’1″ senior outside hitter with an incredible vertical leap. In fact, Lee might end up National Player of the Year – or at the very least will be right there with Stanford’s Kathryn Plummer as her top running mate. So far, she’s been a seemingly unstoppable force in hitting .321 on her 3.90 kills per set, and even in Penn State’s earlier loss to Nebraska recorded 15 kills and 13 digs while hitting .308.

Having a great individual like Lee works in so many ways for Penn State too. For one, it obviously gives them a phenomenal option to score points. It also provides them a go-to option when they need to end a run or require a crucial point. Beyond that, it also opens things up for others as it makes players like Ali Frantti, Heidi Thelen and Abby Detering less watched on the outsides as well as Haleigh Washington and Tori Gorrell in the middle. Overall, its a phenomenal Penn State offense and having a bonafide star like Lee makes it extremely dynamic.

As great as the Penn State offense is, they get plenty of points on blocks. They also slow down a lot of balls for the back row with block touches, as power defines the Nittany Lions in both facets of the game. So much so on the defensive end that their 3.08 blocks per set rank first in the Big Ten and fifth in the entire nation.

In the first go around with Nebraska though, Penn State’s block was solid, but not up to par. In that meeting in University Park they totaled 6.5 team blocks in three sets – good for 2.17 blocks per set. That’s almost a block less than they average per game. Additionally, they actually had less team blocks as the Cornhuskers had seven as a bunch. With something that’s been so key to their success, they can’t afford to be out-done in blocking again, but should post better numbers as they will likely have a better feel for Nebraska after playing them once prior.

How does Nebraska beat Penn State?

This is extremely important in any match because of how much passing and serve reception lends to other factors in the match. So far this season though, Nebraska has been one of the best passing/serve receiving teams in the entire country.

In the first meeting at Penn State, Nebraska didn’t have a single reception error in the match. That doesn’t necessarily indicate that the passes were on target, but Nebraska consistently being in system and hitting .347 does show that. Annika Albrecht was a big recipient – and passed well herself – with 19 kills (.400) on the night.

Additionally, staying in system helped them steer clear of the strong Penn State block and hit at that high of a rate with Kelly Hunter getting great passes to facilitate the offense. And one of the biggest aspects they hit on was getting the ball to Briana Holman in the middle. The best way to work slides and balls to the middle too is by being in system, and with Nebraska’s success in serve receive they were able to feed Holman to the tune of 13 kills while hitting .750. Therefore, if they pass and receive the serve well again, the Cornhuskers could knock off the Nittany Lions once more.

How does Penn State beat Nebraska?

However, in the last time these two schools met, Lee (15 kills, .308) and Washington (six kills, .333) had solid matches but the Nittany Lions were unable to find a consistent third option. Frantti had nine kills, but hit just .192. Gorrell had three kills and hit well below her season average at .286. That not only made Penn State less of an overall threat but also made Washington less of a force. While she still had a solid match, it wasn’t nearly up to her .512 season hitting percentage because Nebraska was afforded the ability to key on her more with less options hurting the defense.

Although they lost the match last year, Penn State was able to establish that third option. The match did end up being loss, but it came in five sets and was in Lincoln against the #1 seed in Nebraska from a Penn State team that was a worse version of what they are now (as they were #16). Lee and Washington totaled 32 kills while Frantti’s 21 kill-15 dig performance was what they needed to have a great chance at winning. They’ll need that for this match to improve on the .227 they hit last go around with Nebraska, as the Cornhuskers are so well coached and good in the back row that the Nittany Lions need to establish a variety of options.