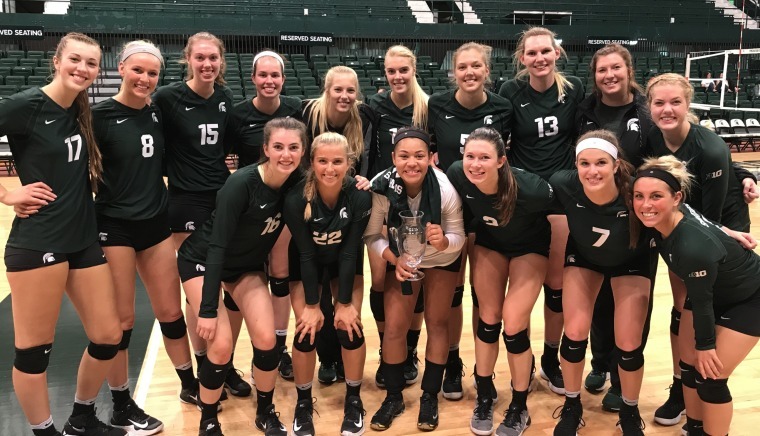 Sophomore setter Maggie Midgette (7) and the #19 Michigan State Spartans bounced back from a loss to Notre Dame by sweeping Central Michigan at the Notre Dame Shamrock Invitational. Current Photo via Tim Binning/TheSwimPictures.com

After suffering their 2nd loss of the season to Shamrock Invitational host Notre Dame the previous night, the #19 Michigan State Spartans responded with a sweep of their own, defeating Central Michigan in straight sets.

As a team, the Spartans hit at an impressive .464 clip and 11 players saw action with nine playing at least two sets. Sophomore setter Maggie Midgette dished out 38 assists, and freshman Meredith Norris recorded five kills, seven digs and two blocks. Freshman Jamye Cox started at libero, the first of her career, notching 17 digs and two aces. Michigan State was led offensively by senior outsides Holly Toliver and Autumn Bailey who had 11 kills each.

The first two sets were all Michigan State as they won easily 25-14, 25-15. In the third, the outcome was much more in doubt as back-to-back Beuter kills knotted the score at 23, forcing a Spartan timeout. That was as close as the Chips got as a double stuff from Midgette and senior middle Megan Tompkins ended the set and match.

Here's the highlights from this morning's win over Central Michigan: pic.twitter.com/h29YEbUNK4

Michigan State posted a commanding 3-0 victory over Central Michigan on Saturday morning (25-15, 25-14, 26-24) at the Shamrock Invitational at Notre Dame. No. 23 MSU improves to 6-2 on the season, and has one match remaining Saturday afternoon vs. Southern Illinois to complete non-conference play . CMU falls to 8-2.

The Spartans built to large leads in each of the first two sets to take 10- and 11-point wins, but the Chippewas took an early four-point lead in the third frame, forcing the Green and White to fight back into it. MSU tied it at 15-all in the third frame, and then went up by as many as three points before the Chippewas battled and tied the set at 23-23, when MSU took its first time out.

MSU used its bench liberally in the match, and freshman Jamye Cox got her first start at libero, finishing with 17 digs and a pair of aces. Setter Maggie Midgette had 38 assists to tie her season and career best, while seniors Autumn Bailey and Holly Toliver each had 11 kills.

For the second straight match, MSU struggled at the service line – MSU committed eight service errors against CMU after nine in Friday’s match vs. Notre Dame. MSU did counter with three aces in the Saturday match, compared to just one the night prior vs. the Irish.

MSU will face Southern Illinois (4:30 pm) on Saturday afternoon to wrap up its weekend action.

The loss dropped CMU to 8-3. The Chippewas close the tournament on Saturday night against the host Irish (8-1).