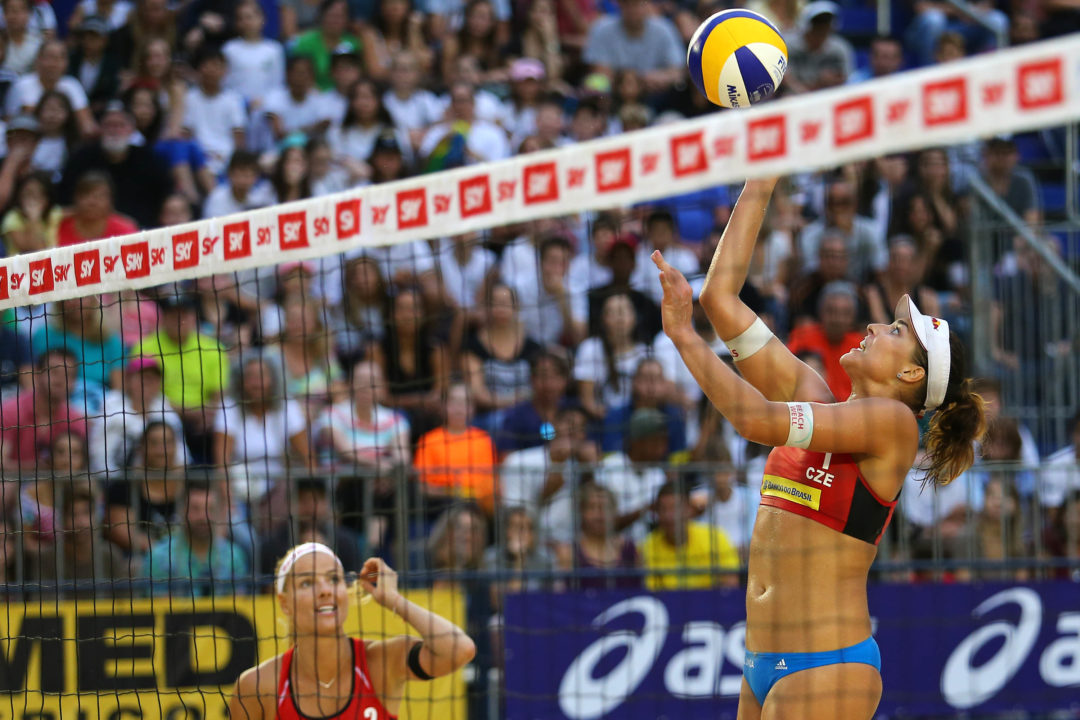 Fourth-seeded Czech pair Barbora Hermannova/Marketa Slukova are the top remaining women's duo heading into the Itapema quarterfinals after knocking out No. 1 Barbara/Fernanda of Brazil. On the men's side, the top three seeds are in tact, led by Brazilians Evandro/Andre.  Current Photo via FIVB

The quarterfinal field is set for the Itapema Four-Star with some surprising names among the group.

On the women’s side, five of the eight pool winners took advantage of just having to play a single match on Friday, but the top three overall seeds were among those sent packing in the main draw Round 2: No. 1 Barbara Seixas/Fernanda Berti (Brazil), No. 2 Melissa Humana-Paredes/Sarah Pavan (Canada) and No. 3 Chantal Laboureur/Julia Sude (Germany).

Bansley/Wilkerson walked through to the quarters as Russia’s Kholomina/Makroguzova pulled out due to injury. Four of the eight Round 2 matches were decided in tiebreak.

Knocking out the top three seeds were: Hermannova/Slukova and Germans No. 10 Victoria Bieneck/Isabel Schneider and No. 16 Karla Borger/Margareta Kozuch. The Czechs took out the top seeded Brazilians in straight sets (21-19, 21-17).  Bieneck/Schneider edged past Humana-Paredes/Pavan, rallying for the tiebreak win (14-21, 21-17, 15-12). Borger/Kozuch took out countrywomen Laboureur/Sude 23-21, 24-26, 15-8.

Kerri Walsh Jennings/Nicole Branaugh went the farthest among the American women’s teams, making it to Round 2, before falling to Maria Antonelli/Carol Solberg 21-18, 21-15.

Summer Ross/Sara Hughes advanced to Round 1 of the main draw, but fell victim to Spain’s Liliana/Elsa in straight sets in the elimination round.

On the men’s side, the quarterfinalists include Brazilians Evandro Goncalves/Andre Loyola Stein and Vitor Felipe/Guto Carvalhaes, Dutch pairs Christian Varenhorst/Jasper Bouter and Alexander Brouwer/Robert Meeuwsen and duos from four other countries.

Six of the top nine seeds are through, led by No. 1 Evandro/Andre, No. 2 Brouwer/Meewsen and No. 3 Piotr Kantor/Bartosz Losiak of Poland. Vitor Felipe/Guto check in at No. 6, followed by seventh-seeded Canadians Sam Pedlow/Sam Schachter and No. 9 Anders Berntsen Mol/Christian Sorum of Norway.

Schachter/Pedlow made the quarterfinals without even taking the sand on Friday, winning due to forfeit of Nicolas Capogrosso/Julian Azzad of Argentina. Meanwhile, Vitor Felipe/Guto fought through a tiebreak match with No. 31 Volkan Gogtepe/Murat Giginoglu of Turkey, rallying 24-22, 15-7 after dropping the opening set 21-17.

Rounding out the field are: No. 12 Varenhorst/Bouter and No. 19 seed Nico Beeler/Marco Krattiger of Switzerland.

Of the quarterfinalists, seven of the eight, all except Beeler/Krattiger won their respective pools and earned free passes to Round 2 of the main draw. The Swiss pair, on the other hand, upset No. 15 Cherif Younousse/Ahmed Tijan (Qatar) in straight sets and then bested No. 13 Ondrej Perusic/David Schweiner (Czech Republic) in a Round 2 tiebreak.

Quarterfinal action is set to begin at 8 a.m. ET Saturday. 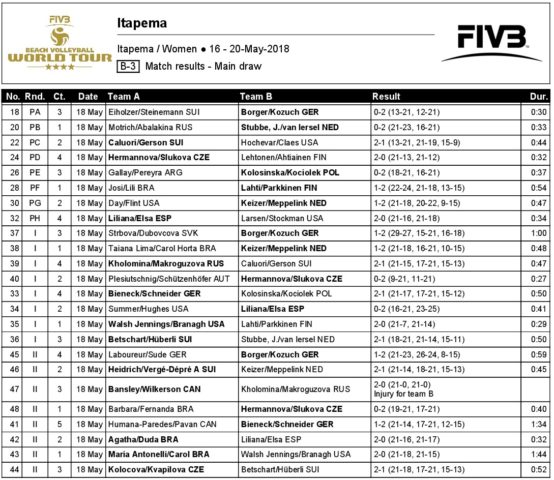 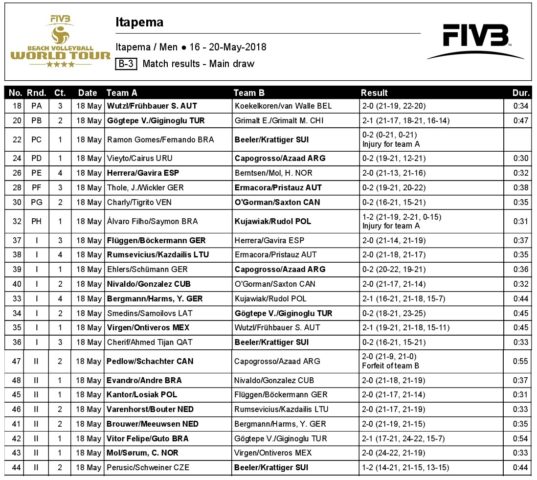