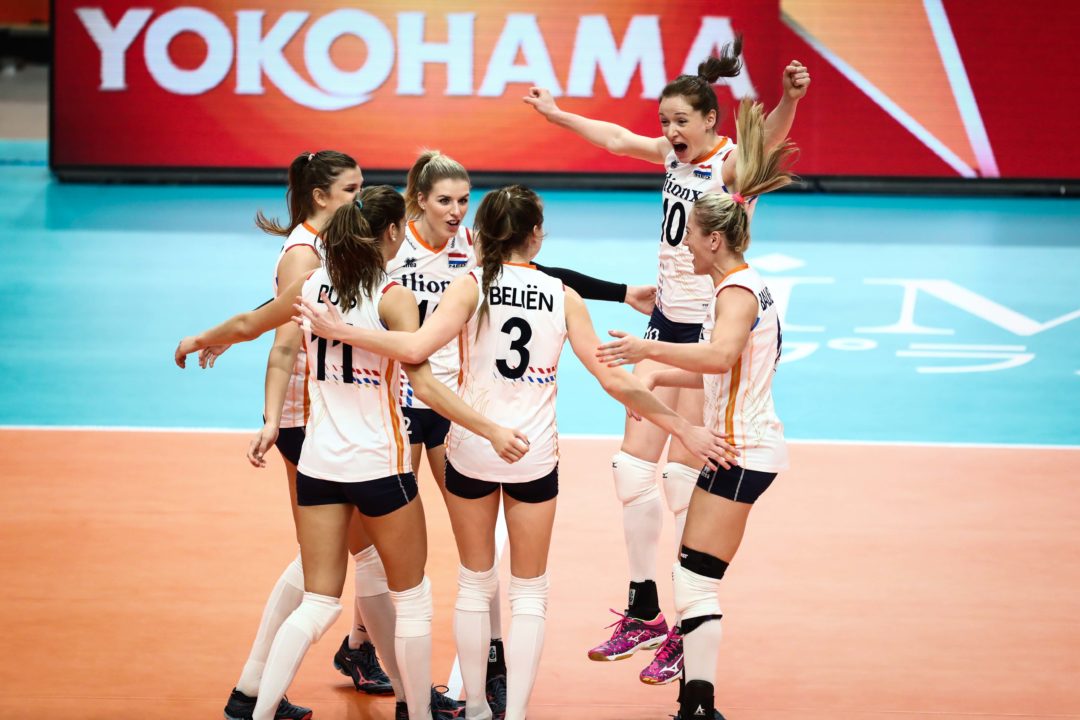 8th-ranked Netherlands finished strong in pool play with a sweep of 26th-ranked Mexico and will enter the second round with an undefeated 5-0 mark. 6th-ranked Japan came in second in Pool A, wrapping play at 4-1 following its 3-0 win over 13th-ranked Germany. Current Photo via FIVB

8th-ranked Netherlands downed 26th-ranked Mexico in straight sets Thursday night inside Yokohama Arena. An advantage in blocks (7 to 1) and at the service line (13 to 7) allowed the Netherlands to finish Pool A undefeated at 5-0.

“I think again we did a solid job today,” Netherlands team captain Maret Balkestein-Grothues said. “The first set Mexico had a lot of serve pressure and we had to adapt to that. I think from the second set on we made a difference with our serve, played how we wanted, and we are very happy with this victory and to have five victories heading into the next round.”

It is the first time the Netherlands has started a World Championship competition with five-straight wins.

Mexico was led by Andrea Rangel and Samantha Bricio, who both tallied 13 points. Bricio logged a total of 5 service aces.

The victory by Argentina over Cameroon Thursday night assured Mexico a second round qualifying spot.

11th-ranked Argentina earned its first win of the 2018 FIVB World Championships with a sweep of 18th-ranked Cameroon Thursday night. The Argentinians, who fell short of second round qualification, were happy to send team captain Emilce Sosa into retirement with a victory.

“I’m very happy with the victory today,” Sosa said. “We needed to win this match, and our mentality was very good today. We were able to play our volleyball and able to keep to our rhythm and our service went very well, which enabled us to cause Cameroon problems with our attack.”

Though Cameroon held the blocking advantage (8 to 5), Argentina limited its errors to 12 and served up 9 aces to secure the win.

Despite the 3-0 result, 10,350 volleyball fans enjoyed an exciting and competitive match between 6th-ranked Japan and 13th-ranked Germany inside Yokohama Arena Thursday night. The Japanese came out on top, finishing Pool A action with a 4-1 mark.

“In the third set things got a little dangerous, but we went aggressively in search of three points in this game and each player fulfilled her role to the end,” Japan head coach Kumi Nakada said. “I think we can go into the second round in Nagoya in good form.”

22-year-old Sarina Koga led the Japanese with 21 points and 18 spikes, 8 of which came in the first set alone. Despite her success, she is still looking to take her game to higher heights.

“In the first set I hardly scored any points and wasn’t able to find my rhythm, but towards the end of the second half of the match, I had more occasions where I received sets in good positions, so I was able to score,” Koga said. “Even so, I think I could have done more when the opposition was marking me, so I think I have to be more ingenious when I have an opponent on me.”

Louisa Lippmann turned in a strong performance for Germany, notching 21 points and 18 spikes. She was followed by Jennifer Geerties, who recorded 13 points.

Final Pool A Standings and Results: