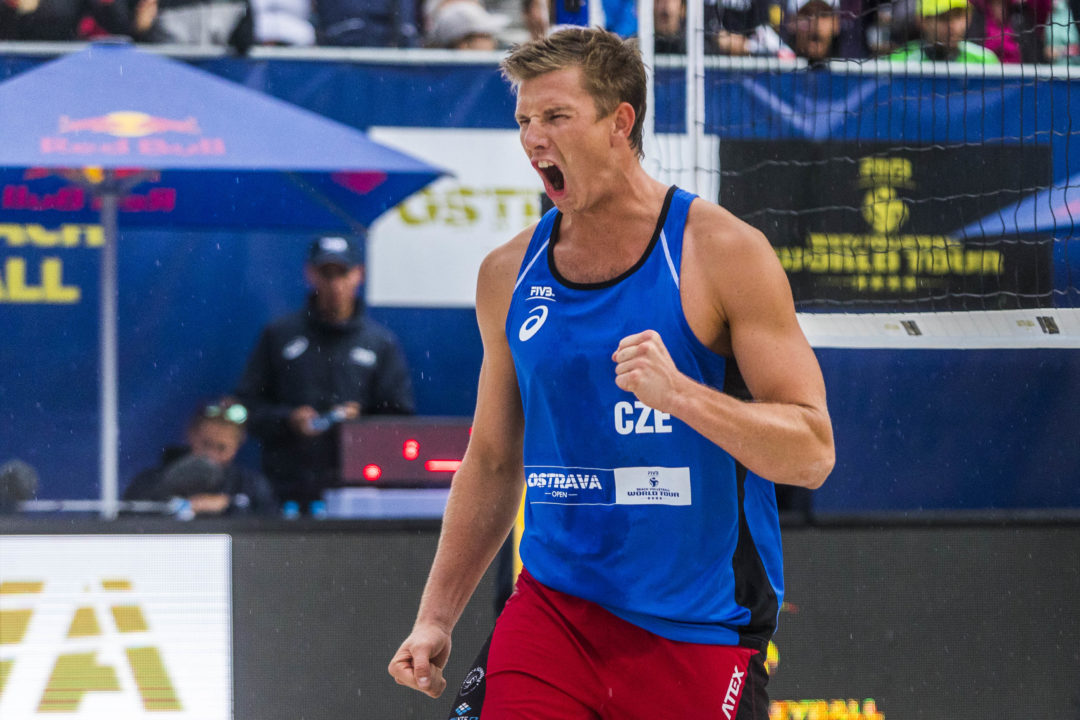 The semifinals are set for the Ostrava Four Star and the home crowd with have one team to cheer for on both the men's and women's sides in Ondrej Perusic/David Schweiner and Barbora Hermannova/Marketa Slukova. Current Photo via FIVB

The semifinals are set for the Ostrava Four Star and the home crowd with have one team to cheer for on both the men’s and women’s sides.

Top seeded Barbora Hermannova/Marketa Slukova is in the final four for the women alongside two German pairs and a Canadian duo. No. 8 seed Ondrej Perusic/David Schweiner are through to the semis on the men’s side along with teams from Poland, Spain and Russia.

No. 12 seed Karla Borger/Margareta Kozuch of Germany will battle fifth-seeded Canadians Heather Bansley/Brandie Wilkerson in the first semifinal in a rematch of Pool E title match, which the Germans won 21-17, 21-17.

Borger/Kozuch and Bieneck/Schneider won their respective pool titles on Thursday, earning free passes to the second elimination round. From there, Borger/Kozuch downed No. 10 Nina Betschart/Tanja Huberli (Switzerland) and No. 3 Maria Antonelli/Carol Solberg Salgado (Brazil) in straight sets to move on to the semifinals.

Bieneck/Schneider took out No. 20 Sanne Keizer/Madelein Meppelink in Round 2 and bested fourth-seeded Brazilians Agatha Bednarczuk/Eduarda “Duda” Santos Lisboa in tiebreak in Round 3.

Hermannova/Slukova downed Ukrainians Valentyna Davidova/Ievgeniia Shchypkova in straight sets in Round 1, Polish pair Kinga Kolosinska/Katarzyna Kociolek and No. 2 Chantal Laboureur/Julie Sude (Germany), all in straight sets to advance to the final four.

On the men’s side, Perusic/Schweiner will represent the host country against fifth-seeded Piotr Kantor/Bartosz Losiak of Poland in the first semifinal match. No. 12 seed Pablo Herrera/Adrian Gavira of Spain will take on No. 24 seed Konstantin Semenov/Ilya Leshukov of Russia in the second match.

Semenov/Leshukov played through two qualifying round matches on Wednesday/Thursday to make the main draw and have won four matches since, all in straight sets, including two to take the Pool H title.

Kantor/Losiak secured the Pool E title Thursday morning, skipping ahead to Round 2. Once there, the Polish pair took out Pedro Solberg/Bruno Schmidt of Brazil in straight sets, before wrapping the day with a 21-19, 21-13 win over Germany’s Thole/Wickler.

Perusic/Schweiner topped Swiss pair Adrian Heidrich/Mirco Gerson and Russian duo Oleg Stoyanovskiy/Igor Velichko in tiebreak to earn a spot in Round 3, where the Czech’s defeated No. 2 Evandro/Vitor Felipe of Brazil in straight sets.

Herrera/Gavira bested Cubans Diaz Nivaldo/Sergio Gonzalez in straight sets and then rallied past No. 4 Paolo Nicolai/Lupo of Italy and No. 3 Alexander Brouwer/Robert Meeuwsen of the Netherlands in three-set affairs to move on to the semis.