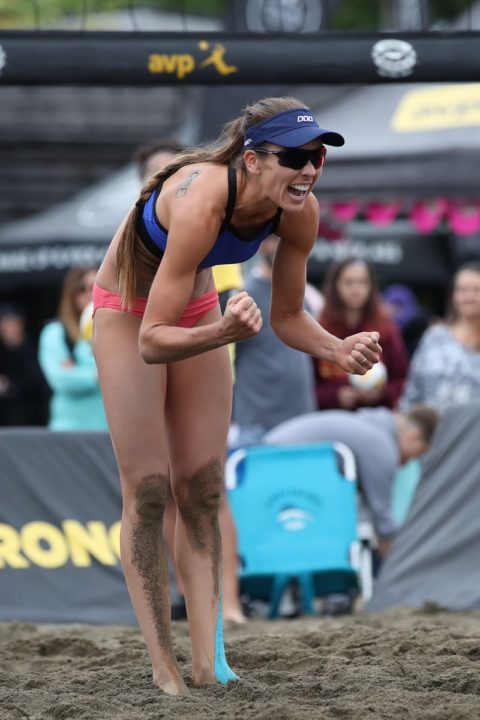 Contenders Jeremy Casebeer/Reid Priddy and Amanda Dowdy/Irene Pollock made it through to the semifinals of the AVP Seattle Open on Saturday.  Current Photo via AVP

No. 1 Phil Dalhausser/Nick Lucena and No. 3 Taylor Crabb/Jake Gibb each won in tiebreak on Saturday to earn their spot in the final four, advancing through the winner’s bracket.

Crabb/Gibb rallied after dropping set one against No. 2 Theo Brunner/John Hyden to win 20-22, 21-19, 15-13 and move on. Brunner scored a match-high 24 kills, but it was not enough. Crabb tallied 23 kills and an ace, while Gibb tacked on 20 kills, four aces and three blocks in the victory.

Brunner/Hyden bounced back with a three-set win over No. 5 Casey Patterson/Stafford Slick (21-12, 16-21, 15-11). Brunner tallied 25 kills and added five blocks, while Hyden chipped in 11 putaways in the win. Patterson/Slick combined for 11 hitting errors and seven service errors in the loss.

Allen/Doherty were not so lucky, falling to No. 6 Jeremy Casebeer/Reid Priddy in the final contender’s bracket match. Doherty chalked up a match-high 18 kills and three blocks, but it was not enough. Casebeer notched 12 kills and four aces and Priddy added 13 putaways and two aces to clinch the pair the upset.

Dalhausser/Lucena will take on Brunner/Hyden in the semifinals, while Crabb/Gibb will face Casebeer/Priddy for a spot in the championship match.

Dalahusser/Lucena have won the titles at both the AVP Austin Open and New York Gold Series events thus far in 2018.

The top three women’s seeds along with No. 8 Amanda Dowdy/Irene Pollock are through to the final four.

No. 1 Kelly Claes/Brittany Hochevar were challenged to the brink by No. 12 Nicolette Martin/Allie Wheeler, but came out on top 22-24, 21-18, 15-8. Claes tallied 30 kills and Hochevar added 15 putaways and two aces in the win. Martin/Wheeler were plagued with seven service errors and combined for just 32 kills.

No. 2 Emily Day/Betsi Flint bested No. 3 Caitlin Ledoux/April Ross in straight sets (21-14, 24-22) to stay alive in the winner’s bracket. Flint posted a match-high 21 kills and three aces, while Day added 16 kills, three blocks and two aces in the victory. Ross put down 20 kills, but it was not enough.

Once in the contender’s bracket, Ledoux/Ross, who teamed up for the weekend as Ross’ partner Alix Klineman is out with an injury, bounced back with a straight set win over Lara Dykstra/Sheila Shaw 21-14, 21-14. Ross piled up 19 kills and three aces and the pair capitalized on seven hitting errors and three service errors by their opponents in the 37-minute victory.

Pollock racked up 25 kills and 29 digs, while Dowdy added 17 kills and two blocks in the final contender’s match. The pair also had help from six service misses by its foes. 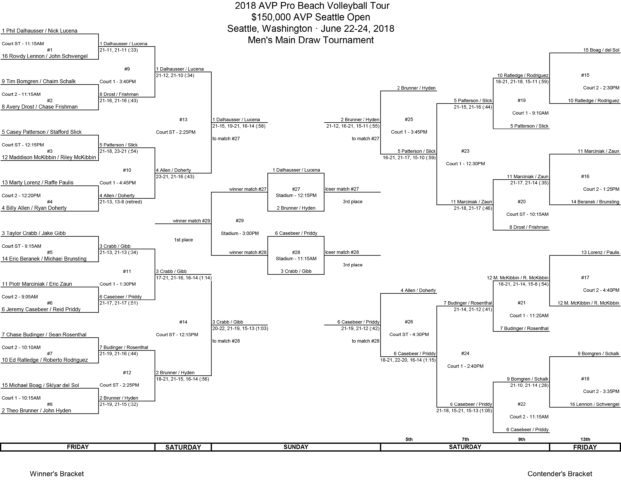 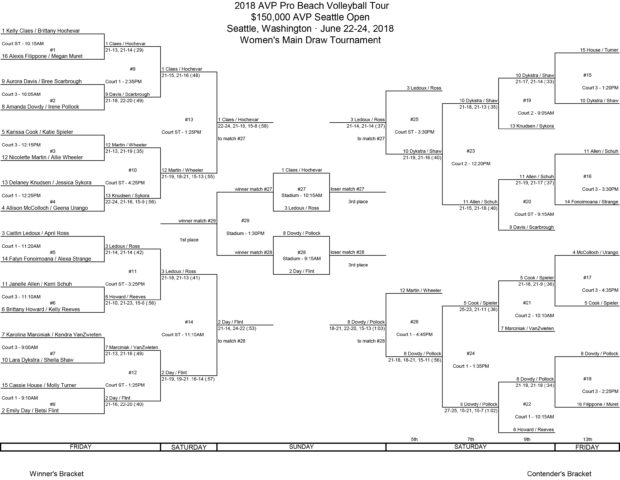