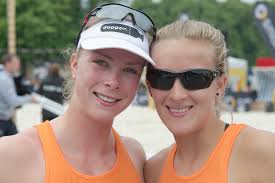 The two-time Olympian beach volleyball pair, Madeleine Meppelink and Sophie van Gestel, split up in 2013 and now have re-joined forces going into the 2017 beach season.  The duo played together from 2011 to 2013 and were the only Dutch women’s team to win a Grand Slam tournament.

Meppelink and van Gestel won the gold at the Corrientes, Argentina FIVB Beach Volleyball World Tour Grand Slam in 2013. Prior to this gold medal, the pair finished ninth overall at the London 2012 Olympic Games.

“I’m looking forward to our renewed cooperation,” Meppelink said. “Sophie and I know each other through and through. We always were a good team. After Sophie took a sabbatical from beach volleyball in 2013, we stayed friends. We expect to compete at the highest level very fast and we’re looking forward to the first matches of the new season. Sophie is one of the most skilled defenders in the world. Almost nobody can dig like her.”

After the split in 2013, Meppelink was paired with Marleen van Iersel for the 2014 season and placed third in the Grand Slam of Moscow. In 2015, the duo finished second at the Grand Slam Moscow and were eliminated in the quarter finals at the World Championships in Netherlands.

Sophie van Gestel partnered with Jantine van der Vlist in 2015 and qualified for the 2016 Rio Olympics but was eliminated with only 1 win and 6 losses in pool play.

“The game of beach volleyball is so addictive and cool that I want to keep on playing,” van Gestel said. “Madelein is a world-class player. Hopefully we can catch up with the best teams in the world very soon.”