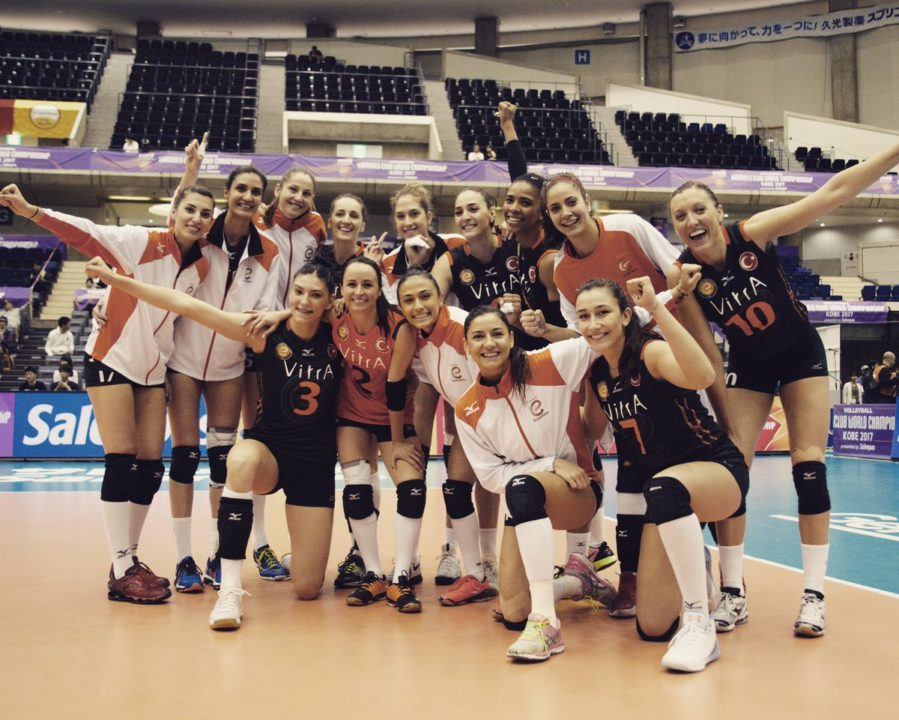 Will two-time defending champion Eczacibasi be in or out and who will take the No. 2 spot in Pool A? All will be decided Thursday night/Friday morning.  Current Photo via FIVB

Spots in the semifinals are on the line as the final four pool play matches of the FIVB Women’s Club World Championships are played Thursday night and Friday morning.

The most intriguing battle of the night may be the first as Dynamo Moscow and Rexona SESC tangle for the second semifinal spot qualifying from Pool A.

Pool B, however, is far from settled with the second semifinal spot up for grabs. The result between leader Volero Zurich (2-0) and Brazilian side Volei Nestle Osasco (1-1) will set the table for the later match.  If Volero wins, two-time defending champion Eczacibasi Istanbul is still alive for a spot in the playoffs, when it faces off against 2016 Asian Club champions NEC Red Rockets. If Osasco should win the match, Ecazibasi may be out.

First up, Dynamo Moscow, of the Russian Super League, will take on Rexona SESC, the 2017 South American Champions of the Brazilian Super League. Dynamo (1-1) is looking for its first ever Club World Semifinals berth. Rexona (1-1) won silver at the 2013 Worlds, and brings a roster featuring three Olympians to the contest.  Both teams lost to Vakifbank Istanbul of the Turkish Super League in earlier Pool A matches.

Dynamo’s opposite Nataliya Goncharova is the top scorer of the tournament so far, putting up 39 points, including 35 kills, three blocks and an ace, while hitting at a .479 clip. Middle Irina Fetisova has served up five aces, second-most at the event.

Rexona’s outside Drussyla Costa has managed 33 points (tied for third) with 9 kills, three blocks and an ace.

The winner will advance to the semifinals and have a chance at a podium finish.

Volero Zurich, of the Swiss League, has already secured its spot in the semifinals with sweeps of Eczacibasi Istanbul (1-1) and NEC Red Rockets (0-2), continuing a streak of five straight Club Worlds semifinal appearances. In its final Pool B match, Volero must win just one set against Osasco to secure first place in the pool. The Swiss team is in search of another medal to go with its 2015 bronze.

The Brazilians, which won the lone previous Club Worlds meeting with Valero in 2014, have advanced to the medal round in all five of their previous appearances, including a gold medal performance in 2012.

Opposite Olesia Rykhliuk has scored 33 points for Volero, including 31 kills, while outside Kenia Carcaces has added 31 points, including 24 kills and six blocks. Bojana Zivkovic is tops in the tournament on the setters’ chart (6.33 per set), while libero Silvija Popovic is the best digger (2.00 per set).

For Osasco, outside Tandara Caixeta and middle Ana Beatriz Correa have carried the offensive load with 27 points apiece. Caixeta has managed 22 kills, while Correa has chipped in 15 kills, seven blocks and five aces.

The Pool B picture will be a little clearer when this match begins and the defending champions, Eczacibasi (1-1) will know whether a semifinals berth is even feasible. NEC Red Rockets(0-2)  are out of the semifinals picture but could keep the Turkish side out as well.

If Osasco does not pick up three points against Volero Zurich, Eczacibasi is still in play. A win would secure them a spot in the semifinals with a runner-up finish in Pool B.

Aiding the Eczacibasi effort will be opposite Tijana Boskovic, who ranks second among all scorers with 34 points, including 24 kills, six aces and four blocks.

Middle Haruyo Shimamura is the top player for NEC with 18 points, including 13 kills and five blocks.

Vakifbank is playing for the top spot in Pool A. Winning just two sets of the Japanese host team would secure that position. However, the results of the Dynamo Moscow/Rexona match may determine the qualifying spots before this match ever begins.

Vakifbank and Hisamitsu met in pool play the 2016 World Championships. The Turkish side is looking to add to its three previous medals (gold in 2013, silver in 2011, bronze in 2016).

Leading the way for Vakifbank is outside hitter Ting Zhu, who boasts a .500 hitting percentage and has scored 32 point, including 25 kills and five blocks. Opposite Lonneke Sletjes also has added 32 points, 31 on kills. Middle Milena Rasic is tops among all blockers with 1.43 per set.

Outside Risa Shinnabe has scored 22 points for Hisamitsu, including 19 kills. Libero Sayaka Tsutsui leads all players on serve receive with a 60 percent efficiency.