United States Falls in 4 to Japan in Friendly Match 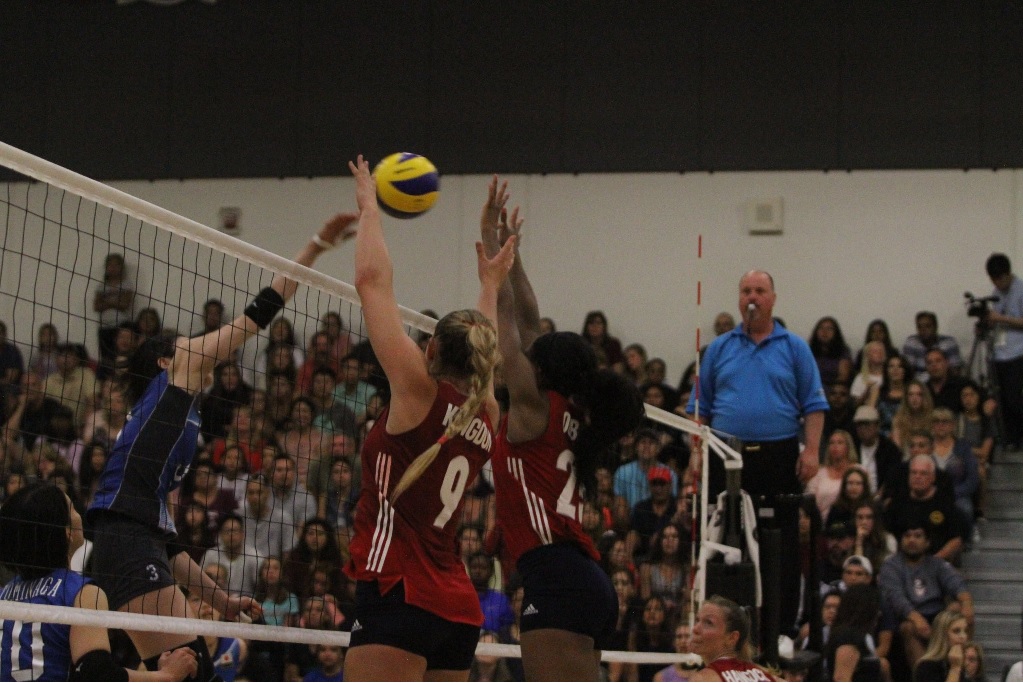 Madi Kingdon Rishel goes up for a block with Chiaka Ogbogu in the third set of Friday's friendly match against Japan. Kindgon Rishel had 16 points in a 3-1 defeat for the United States. Current Photo via USA Volleyball

The United States dropped a friendly match to Japan 3-1 (21-25, 25-23, 25-23, 25-15) on Friday in front of a standing-room only crowd on Friday night at Tustin High School in Tustin, California. The two teams have been training together the past week and scrimmaged on Tuesday as well. Every set was tightly contested.  The United States came back from a 19-21 deficit to win the first set 25-21. They trailed for a good part of the second set, but tied it late before eventually falling. They were even up late in the third set 21-10 before dropping the set. Japan took control of the fourth set. They jumped out to 10-4 and 16-10 leads before putting the match away.

Though this was just a friendly, there are some points to take away from the performance::

The United States used this match as a chance for many players to get match experience.

Coach Luka Slabe stated after the match that they were planning on giving reps to players who were not used extensively in the Volleyball Nations League. Karch Kiraly decided to sit the following players:

Micha Hancock was the only player in the lineup that got some type of significant time in the VNL, though Madi Kingdon Rischel and Rachael Adams played on Friday and were on the roster in the Final Six.

Karsta Lowe could benefit Team USA in the World Championships.

One of two local players from Southern California, Lowe led the United States in scoring with 18 points. She put away 15 kills and hit .469 without getting blocked or committing an attack error. It was nice to have a tall (6’4″) left-handed player on the right side to get the team out of trouble rotations. She was able to handle a lot of balls out of system. There were times she hit a heavy ball inside the block to regain momentum. While her shoulder is in pain, she may be a valuable addition to back up Kelly Murphy.

The United States blocked better than it seemed.

Japan is a crafty team that found a way to get around the block often. It is true they only hit .259 for the match, but they notched a .556 hitting percentage in the last set. This is impressive seeing as they only had two players (Nana Iwasaka and Erika Araki) over 6 feet tall. The United States finished with 12 blocking points, Chiaka Ogbogu leading the way with 3 blocks. It looked like they are in position to add to that total. The United States looked like a wall against Miyu Nagaoka, but she was still able to find a way to put away 15 kills in just two sets of action. Japan also put a lot of top spin shots just over the block and onto the baseline. 12 points from the block is still more than they produced in the finals of the VNL against Turkey.

The United States used two liberos on Friday. They started Amanda Benson in the first two sets, and Megan Courtney in the last two. Courtney started the match as an outside hitter, finishing with 3 kills on 11 swings. Though she moved to libero, she was a liability in serve receive. She finished with 9 passing errors against almost exclusively float serves. This match was a situation for the coaching staff to let players get through tough outings on the court instead of being replaced.

The team also finished with 12 service errors, many of which coming after Japan had reached 20 points in a set. These errors came primarily from float serves.

The United States was not offensively efficient in the middle.

Adams and Ogbogu scored 8 and 7 points respectively in for the United States. Hannah Tapp came into the match in the last set and scored a point. 11 of those 16 points came from kills, but they only hit a combined .193. They attempted to get Adams out to the right on the slide attack, and she found success there, but that is a low efficiency for a position that usually has a high kill rate in attack. It should be noted that much of this was due to Japan’s defense. While they only got 1 blocking point on any of Team USA’s middle blockers, they were able to get many touches at the net and digs in the back row which will cause hitting percentages to drop.

While they scored points, the outside hitters struggled with efficiency as well.

Madi Kingdon Rischel was second for the United States with 16 points. Her points came from 14 kills and 2 aces, but they also came with 7 attack errors and a .212 hitting percentage. Sarah Wilhite made her first appearance in the third set and immediately got a pair of kills. She finished with 7 points on 6 kills, but she hit .238. Megan Courtney hit .182 before moving to libero.

Again, much of this was due to Japan’s phenomenal defense. Their liberos, Kotoe Inoue and Mako Kobata, both kept a surprisingly number of balls in play. Plenty of balls that were expected to be put away turned into system attacks for Japan. The defensive prowess wasn’t limited to their liberos. Risa Shinnabe made some spectacular digs down the line to help Japan put away the fourth set.

The event was great for USA Volleyball.

Everyone seemed to be in good spirits after the match. It was a great chance for coaches to see a variety of players in action. While the United States sat their traditional starters, Japan used 13 different players throughout the night. Even though they lost 3-1, a few less errors in late in the second and third sets could have actually given the United States a sweep.

The gym was full, the crowd was loud, and Rob Espero did another great job announcing. Hundreds of people stuck around for an autograph session after the match and fan mobbed the Japanese players and coaches to get pictures. The coaches learned more about their players ahead of the World Championships, and fans got to see some great volleyball.