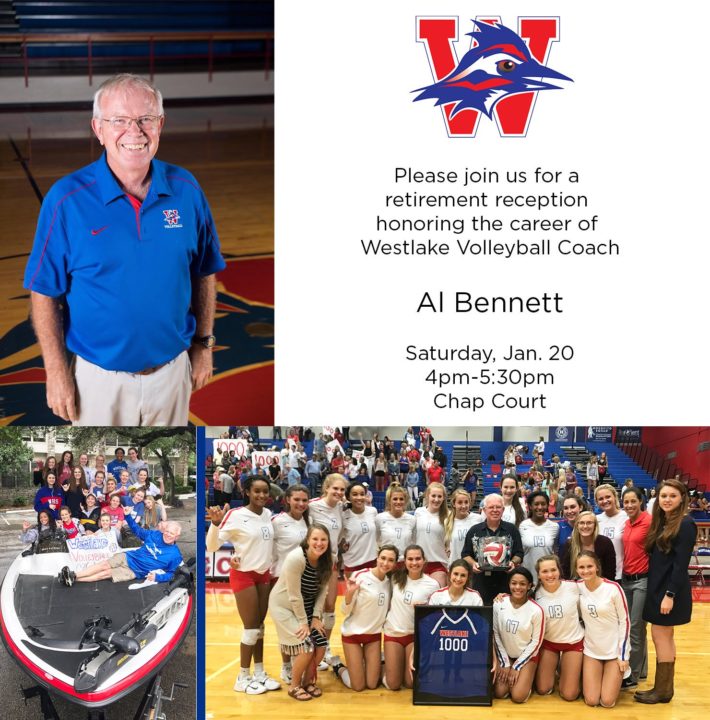 With a resume including more than 1,000 wins and a career spanning nearly 40 years, Al Bennett was tabbed for induction into the Texas State Girls Coaches Hall of Fame.  Current Photo via Westlake Nation

With a resume including more than 1,000 wins and a career spanning nearly 40 years, Al Bennett was tabbed for induction into the Texas State Girls Coaches Hall of Fame.

Bennett, who retired from Austin’s Westlake High School following the 2017 season, ended his career with 1,007 wins, fourth most all-time for a coach in Texas high school girls volleyball history.

Bennett began his coaching career at St. Austin’s Catholic High School in 1979, coaching volleyball and teaching physical education. Five years later, he was a volunteer assistant at the University of Texas.

In 1988, Bennett took the job at Westlake, acting as the varsity girls coach in the program’s first season. In his 30-year tenure, the Chaparrals won four state championships. The team won 4A titles in 1991 and 1993 and 5A crowns in 2002 and 2004 and made the state title match four other times. Under his leadership, Westlake also won 25 district titles in the past 28 years.

On Sept. 11, 2017, Bennett notched his 1000th career victory as the Chaps defeated Vista Ridge in the District 25-6A opener and led Westlake to the area playoffs.

The only coaches with more wins than Bennett in Texas high school volleyball history are:

Bennett was inducted into the Hall of Fame on July 9 in Arlington, Texas, alongside Skip Townsend and Cathy Self-Morgan.

Westlake High School announced in January that the court in its main gym would be named in honor of Bennett.

As the State Volleyball Tournament begins, TAVC would like to wish all the best to two legends of the sport of high school volleyball in Texas. Al Bennett from Westlake and Mike Carter from Reagan HS have retired from HS coaching. You both will be greatly missed! #legendary pic.twitter.com/c37HBSfLdd