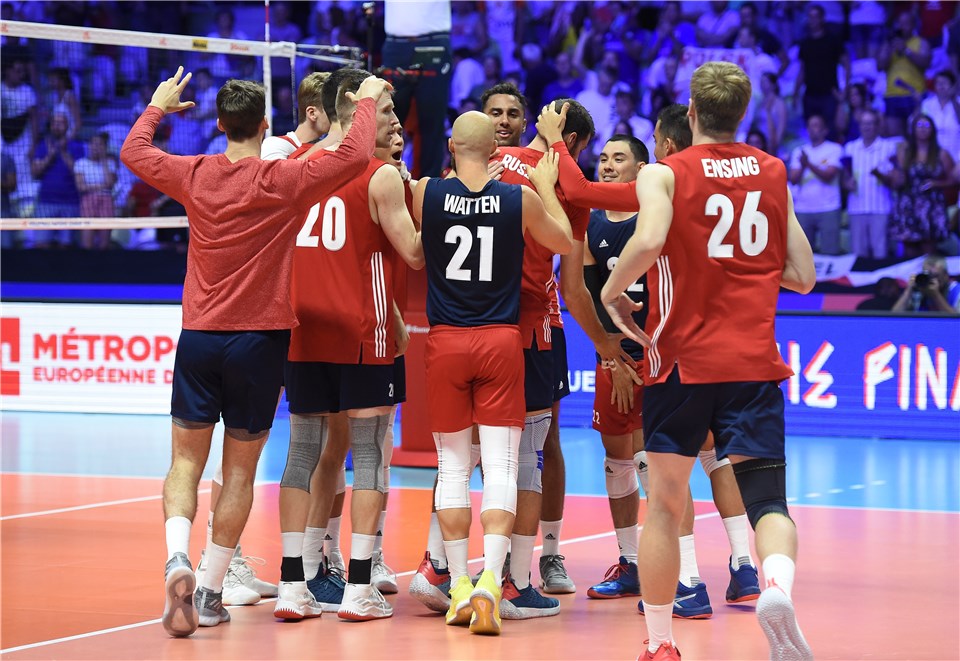 With a 3-0 win over Poland, the United States qualifies for the VNL Semifinals with Russia in Pool B. Taylor Sander left the match with an injury late in the 3rd set.  Current Photo via FIVB

While the United States did not play on Wednesday, they had the luxury coming into their opening match of the Volleyball League of Nations Final Six of knowing a victory of any kind would secure their progress into the semifinals. They came out swinging and got a 3-0 (28-26, 25-15, 25 -18) sweep over Poland, eliminating Poland from the tournament. The big story coming into the match was the reintroduction of Benjamin Patch and Taylor Sander into the lineup.

The introduction of those two players led to a lineup that the United States has not used yet in this tournament. Matt Anderson and Taylor Sander started as outside hitters. Patch got the start at opposite, and that moved Aaron Russell  to the bench.

Sander started out on fire for the United States after having not played for the past 4 and a half weeks while his wife gave birth to his first child. In a tight set that the United States won 28-26, Sander scored 9 points on 7 kills and 2 aces. This included a service ace to win the set. Sander finished the match with 14 points (11 kills, 3 aces) and hit 55.00%. Patch scored 12 points on 11 kills and a block.

Matt Anderson came on strong as the match progressed. Coach John Speraw moved him to the outside hitter position, where he plays for Zenit Kazan, and he finished with a match-high 15 points. He led the match in kills (13) and also contributed 2 service aces.

Micah Christenson got 9 kills out of his middle blockers in 3 sets of action. Dave Smith finished with 5 kills on 9 attempts, and Max Holt chipped in 4 kills in 11 swings. Smith also contributed 2 blocks and a service ace while Holt finished with 1 block.

Poland decided not to play Bartosz Kurek after his 23-point performance in a 3-0 loss to Russia on Wednesday. Damian Schulz, the man starting in Kurek’s place, scored 13 points and was the only player for Russia to finish in the double digits. Artur Scalzpuk scored 6 points on 6 kills and hit 33.33% for the match. Their other outside hitter, Bartosz Kwolek only produced 3 kills (4 points total) and had dismal attack average of 17.65%.

Coach Vital Heynen started Fabian Drzyzga at setter. Drzyzga did not have any more success through the middle than he did at the pins. While they did not start Matuesz Bienek due to a sore knee, Jakub Kochanowski and Bartlomiej Lemanski finished with 4 and 2 points respectively.

The United States overpowered Poland in attack and serve. They finished with 16 more kills than Poland (46-30) and 7 more service aces (8-1). 5 of those aces came from Sander (3) and Anderson (2). The area that the United States seemed not to strive in was blocking for points.

While they only finished with 5 blocking points (as opposed to Poland’s 4), they were quite effective in defense. They were able to get their hands on 38 of Poland’s attacks and funnel the attack back to the back row defenders. While that does not show up on the blocking stat line, it is evident when Poland only attacked with 35.39% efficiency.

The United States will play Russia on Friday in a match that determine the seeding for the semifinals on Saturday. Both Russia and the United States have already qualified for the next round of play.

At 22-15 in the 3rd set, Sander and Holt attempted to block an attack from the right side of the net. There seemed to be some contact between the two. When Sander came down he brushed the net and then fell to the floor. It appeared his right knee gave out, a knee in which he wears a brace. He stayed on his back on the floor, was helped off the court, but was walking around after the match. It is not know the severity of the injury, or if he will play on Friday against Russia.