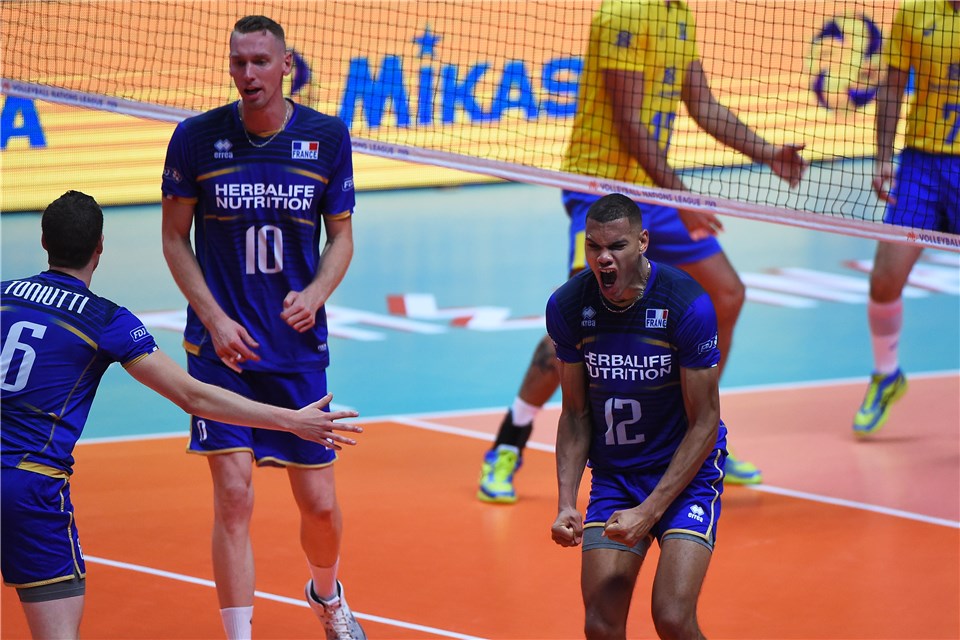 Stephen Boyer led France on Wednesday with 23 points in France's 3-2 win over Brazil. In the other match, Russia handled Poland 3-1 while getting double-digit production out of 4 players. Current Photo via FIVB

2018 FIVB Volleyball Nations League – Final Six Pool A and B

France survived a 5-set marathon with Brazil to move themselves closer to a spot in the semifinals. They came back from being down 2-1 to take the next 4th and 5th sets and claim a victory. Brazil is able to claim a point from the defeat by taking 2 sets off of the top seed entering the Final Six.

Stephen Boyer led the way for France with 25 points on 22 kills and 3 blocks. The outside hitter who is heading to Italy next season to play for BluVolley Verona posted an attack success rate of 57.89%. Earvin N’Gapeth was right behind Boyer with 23 points on 20 kills and 3 blocks while hitting 54.05%. Kevin LeRoux was the only other French player to record a block. The middle blocker had 2 blocks, 5 kills and a service ace. LeRoux’s counterpart in the middle, Nicolas LeGoff also scored 8 points (all on kills). Kevin Tille got off to a rough start with 0 kills on 5 swings. He was replaces by Thibault Rossard in the 1st set. Rossard finished with 7 kills and a service ace.

The story for Brazil in this match was similar to how it has been for Brazil throughout the entire VNL, Wallace led the way while they looked for production from other sources. Wallace finished  with 21 points on 20 kills and a block while hitting 58.82%. Mauricio Souza, back from an injury, replaced Isac Santos and started the last 3 sets in the middle for Brazil. He ended the match as Brazil’s 2nd-leading scorer with 11 points on 7 kills, 3 blocks and 1 ace. Santos had 2 points on 2 kills in 2 sets of action. Lucas Saatkamp scored 8 points in the middle on 7 kills and a block. Lucas Loh scored 10 points in kills on the outside. The other outside hitter position was split between Mauricio Borges and Douglas Souza. Borges was replaced after the 3rd set due to an injury. He finished with 6 points while Douglas Souza scored 5. Bruno handled the setting duties for Brazil and contributed a block, ace, and kill.

The stats were fairly level between both teams. France held the edge in kills (63-60) and blocks (8-7). Brazil had one more service ace (3-2). Many times the difference in close matches are the amount of errors, but both teams finished with 35 apiece.

French coach, Laurent Tillie, credited his setter, Benjamin Toniutti, with keeping Brazil’s transition defense out of rhythm. He stated, ” They were expecting Ngapeth but Toniutti made a lot of different choices; our attack was balanced.”

Brazil will look to bounce back on Thursday against Serbia. They need a victory in order to remain in contention for a place in the semifinals, but will do so without Borges.

Russia had an impressive Preliminary Round, finishing 2nd place while using varied rosters and resting some world-class talent. Their introduction of a pair of Zenit Kazan players (Artem Volvich and Maxim Mikhailov) led to a convincing victory over Poland in the first match of Pool B.

The bright spot for Poland came in the performance of Bartosz Kurek. The opposite who just signed with KPS Stocznia Szczecin got a the start at opposite after being used in an extremely limited capacity in the Preliminary Round. Kurek led his team with 23 points on 22 kills and 1 block. He finished the match hitting 68.75% (80% after 2 sets). Artur Szalpuk replaced Bartosz Kwolek in the 1st set when Kwolek started with 1 kill on 5 swings. Szalpuk ended up with 11 kills and 1 ace while hitting 61.11%. Aleksander Sliwka started at the other outside hitter position, but he could only manage 5 points on 3 kills, 1 block, and 1 ace. Bartosz Bednorz started in place of Sliwka in the 4th set, but only contributed 1 kill on 6 attempts. They used 3 players at middle blocker, but only got a total of 11 points. Jakub Kochanowski (8 points) played the entire match, while Bartlomiej Lemanski (2 points) replaced Mateusz Bienek (1 point) in the 1st set due to a sore knee.

Russia came at Poland with a balanced attack orchestrated by Dmitry Kovalev. The setter from Ural Ufa got double-digit production from 4 of the 5 attacking players in Russia’s lineup. Dmitry Volkov led Russia with 17 points on 11 kills, 3 blocks, and a match-high 3 aces. The outside hitter posted an attack efficiency of 55.00%. Their other outside hitter, Egor Kliuka, contributed 7 kills, 2 aces, and led the match with 4 blocks. Dmitriy Muserskiy was the 2nd-leading scorer of the players in the Final Six after the Final Round. He scored 14 points on 10 kills, 3 blocks, and 1 ace in the middle. Artem Volvich got 8 points in his VNL debut. He hit 66.67% on his way to finishing with 6 kills and 2 aces. Another player making his debut of the tournament was Maxim Mikhailov. The opposite scored 16 points, all on kills, while hitting 61.54%.

Russia delivered a dominating performance from the service line. They finished with 9 aces, averaging 2.25 aces per set. Poland was only able to deliver 3 points from service aces. They also out-blocked Poland by a margin of 7 (12-5). While Russia had 2 more kills than Poland (53-51) and 1 fewer error (23-24) in the match.

Poland will look to bounce back against the United States on Thursday. Russia gets the day off, but has their sights set on what Team USA will bring to the table. Russian captain, Dmitry Volkov stated, “I think USA are an even stronger team than Poland in this competition, and that is the opponent we’re focusing on right now; we do not want to look any further.”