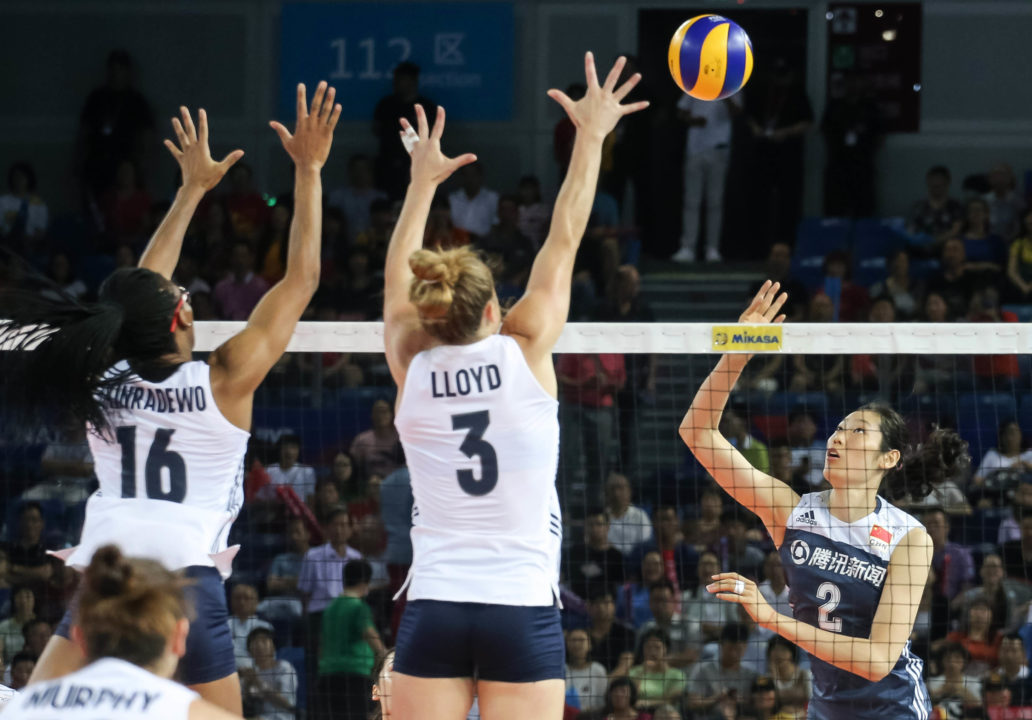 China and the United States will battle for a spot in the finals against either Brazil or Turkey at the 2018 Volleyball Nations League. Archive Photo via FIVB

The semifinals are now set for the 2018 FIVB Women’s Volleyball Nations League, with Brazil, Turkey, the United States and China filling the spots. That occurs after things have been carved down from the 16 team pool and the Final Six, with two semifinal matches, a third-place match and championship remaining.

With the semifinals coming tomorrow, let’s take a look and a quick preview at each individual semifinal match on the penultimate day of the 2018 tournament.

The defending (and final for the event) World Grand Prix champion Brazil will look to take out the Cinderella story in Turkey with a spot in the finals on the line. It’s the ultimate match of established against underdog for a chance at gold.

Brazil has all kinds of size and power up front – both offensively and in the block. Offensively, it’s all about Tandara Caixeta and Gabriela Braga Guimaraes. Defensively at the net, it’s about Adenizia Da Silva and Ana Beatriz Correa. Each of those pairs ranked one and two respectively in the Final Six for spikers and blockers. They’ve also got experience as a team who’s won plenty of big tournaments, including the 2017 World Grand Prix when Correa was the events best middle.

Turkey meanwhile is all about balance offensively and another dynamic block – maybe the best along with Brazil in the field. Their Final Six numbers weren’t as strong as their preliminary round marks, but still Eda Erdem Dundar, Zehra Gunes and company put up strong totals. Hande Baladin contributes to the block as well and is the team’s top offensive option along with Meryem Boz, but it’s not as dynamic as an attack as Brazil although it can be quite effective in its own way.

It’s tough to take too much stock into the first meeting between the two because it came in week two on May 22, but it does tell some details to look for in what was a 3-1 Brazilian victory played in Turkey. For instance, Brazil had a huge advantage in spikes (65-43). Turkey kept pace and actually outperformed Brazil in blocks (14-13) with the two even in aces (3-3) and more team errors from the South American side (22-16).

Those numbers show the need for Turkey to be a bit better offensively, which they should be as Baladin didn’t start in any set and only played the final three games. If she continues her strong play and Boz brings on more production than six kills on 26 tries, the Turkish block should be there for a potential upset.

If Brazil wants success, they’ll need to continue the high-powered attack with Caixeta (26 points in that match) and more production from Guimaraes (just 3 points in one set in the meeting) with a low-enough error count. To make up for Turkish improvement, they’ll also try and have more success and aggression with their serve.

The only teams to defeat the Americans so far in this tournament were Serbia and Turkey, but sure enough the U.S. Women’s National Team got revenge and took down both in their Final Six pool to get to this point. Now the World’s #2 team faces an even tougher test in a higher stage against the World’s #1 team in China on their home court.

It’s all about balance, depth and key players stepping up in big moments for the United States. They’ve shuffled the lineup throughout, which has kept players fresh and allowed them to find the right player matchups. It almost cost them in their Final Six opener, but Michelle Bartsch-Hackley came on and was a superstar for the red, white & blue in. Kelly Murphy and Jordan Larson have also been constants for a team that does well in seemingly every facet of the game where players fill roles such as Tetori Dixon and Foluke Akinradewo in the block, Kelsey Robinson on defense, Carli Lloyd/Micha Hancock as setters, etc.

China obviously has the X-factor of the home contingent sending their support. They also have arguably the best player in the world in Zhu Ting, who notched 36 points against Netherlands before she had a low output of attempts (compared to normal) in the second match with a bid to the semifinals already punched. She’s very capable of taking over a match and pushing China to victory. It’s not about shutting her down, but slowing her and not allowing the others to hurt you too like Yuan Xinyue and the Chinese block or Liu Xiaotong‘s versatile game.

It won’t be the first test in China for the U.S., who downed the Asian side in straight sets back in week four on June 7. However, that one was in Jiangmen with the stadium holding 6,750. This go around will feature almost double the fans – mostly cheering on the Chinese side. Zhu was also still in the midst of easing in with the Chinese side, but the United States were just overall more efficient and balanced throughout facets of the match.

If they want the result to change, China needs to feed Zhu more than 23 attempts as she had in that one and will need more from their block that lost the stat 8-4. Even though they logged more aces (6-5) in that loss, they need to find more from the serve in putting the United States out of service as they lacked a myriad of errors.

For the United States they’ll look for the same result with strong play in many different aspects of the game. Being efficient once again will be tough considering the environment, but they’ve been able to keep their composure thus far in the tournament. They’ll need Lloyd to be strong in serve after she struggled against Turkey – or Hancock if she plays – but the attackers all had success last time against China in Bartsch-Hackley (18 points), Murphy (13 points) and Larson (12 points) who had 36 combined kills on 74 attempts. Beyond that, how do they hold up against Zhu?