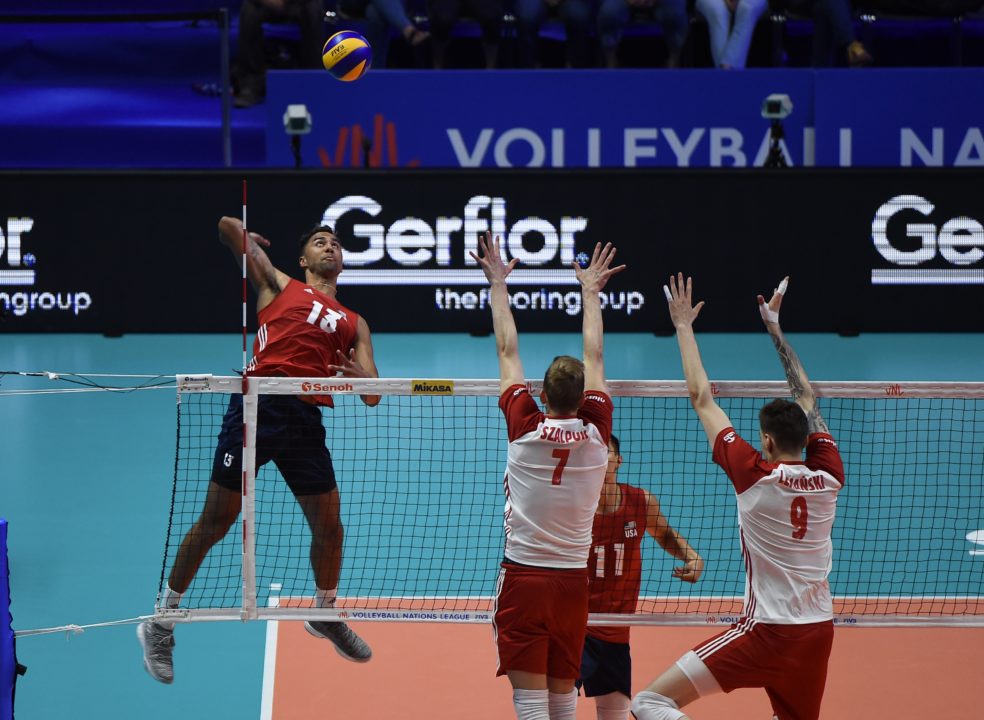 The United States swept Poland as they join Brazil in clinching bids to the semifinals of the VNL. Archive Photo via FIVB

In the second match of the day, but the lone one for Pool A, Brazil swept Serbia to punch their bid to the 2018 FIVB Men’s Volleyball Nations League semifinals. For Serbia, it puts their backs against the wall as they must win against France tomorrow in three or four sets.

The South American side was just a bit stronger in seemingly every facet of the match and notched more kills (40-35), blocks (14-8) and aces (5-3) on less team errors (15-19). The biggest key was the Brazilian defense, that not only scored six more with team blocks, but got plenty of other touches and kept balls from termination with 29 digs to Serbia’s 16.

The first set was all Brazil, as Wallace De Souza (16 points) continued his thunderous attack during the tournament with 15 kills on 22 tries. While he provided the offense, Lucas Saatkamp (15 points) brought the defense with an incredible eight blocks in just three sets.

Serbia came back to tighten things in the second behind Aleksander Atanasijevic (17 points), Marko Ivovic (13 points) and Srecko Lisinac (10 points), but couldn’t get over the hump. A big piece of that was the lack of other options emerging for Serbia, with every other player notching six points for the Serbians and three kills on 24 attempts. Compare that to Brazil, where outside their top three of Wallace, Saatkamp and Douglas Souza (10 points) they got 18 points and 12 kills on 29 tries.

Brazil’s slate in the Final Six has now concluded with this triumph and their five set loss to France yesterday. That leaves them in a semifinal spot because either France will defeat Serbia and their 1-1 mark will push them through, or if Serbia downs France then the South Americans will have more points. That brings up the next point, where a Serbian victory over France in three or four sets pushes them through, while France will either need to win or lose in five sets to join Brazil in the semifinals from Pool A.

It wasn’t just a simple victory for the U.S. Men’s National Team, as they took down Poland to clinch a spot in the semifinals. The reasoning is because Poland fell short to Russia yesterday as well, so they are eliminated while the United States will play on.

The serve for Team USA took over in the match, as they went on to log an 8-1 edge in aces. That also contributed to Poland being lackluster offensively, while the Americans were in system more often, creating a 46-30 advantage in kills. In total for the match beyond kills and aces, the United States notched one more block (5-4) than Poland. On the flip side, in the losing effort, Poland had more digs (26-24) and seven less team errors (19-26).

The first game would go on to be the tightest, as things went to extra points with Damian Schulz (13 points) keeping things close for Poland. However, the mass amount of injuries that have kept the top Polish lineup out for this tournament and thinned out there depth seemed to cause the biggest difference compared to the United States.

The American side had four players at eight or more points and three in double-figures compared to just Schulz for Poland in double-digits and no others at more than six. Leading the way for the United States in closing out the first and winning the second and third games by strong margins were Matthew Anderson (15 points), Taylor Sander (14 points) and Ben Patch (12 points), with the trio combining for 35 kills on 67 tries. The entire Polish side collected 30 kills on 85 attempts.

For Sander and Patch, it was all about their reinsertion into the lineup for the U.S. that featured strong outings. The biggest negative in the match for the red, white and blue though was that Sander was injured in the match. More on his injury and a more detailed match recap for the team can be seen here.

Next up, the United States and Russia face-off. Both teams are already secured semifinals bids, but the victor will win Pool B and get to take on the Pool A runner-up as opposed to the Pool A winner. That comes with even more importance because if the Pool A winner is France, whoever wins between the Americans and Russians would avoid the home team in the final four.