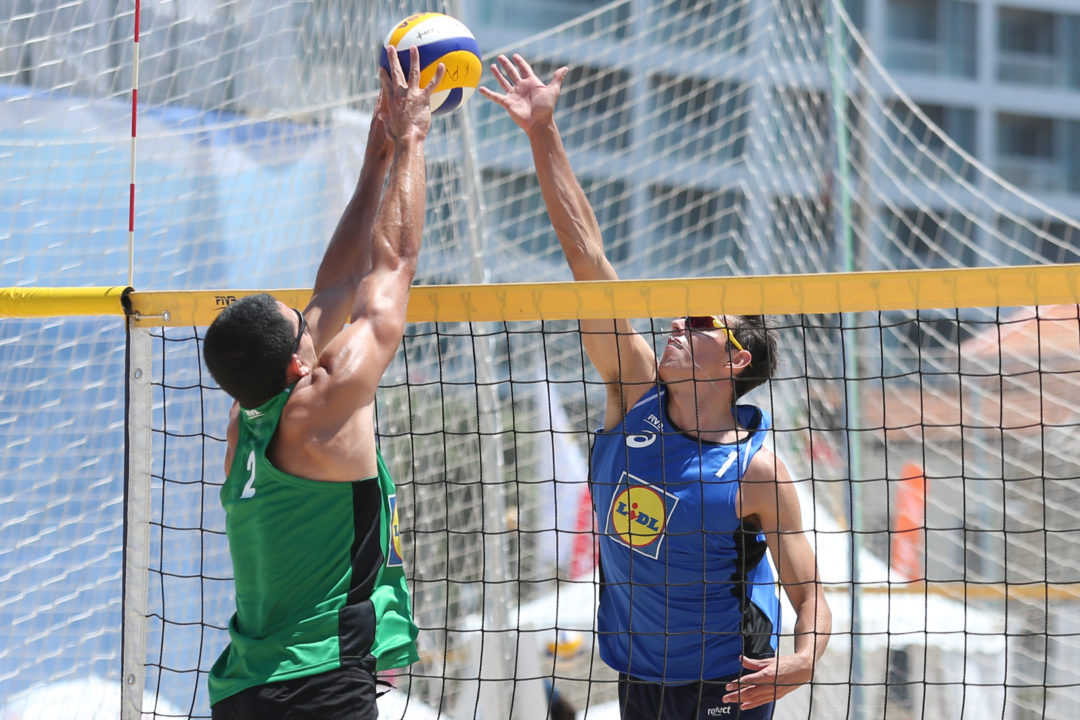 One hundred teams (55 men's and 45 women's) made their way to Espinho, Portugal for a chance to compete in the FIVB Four Star event this week. After country quota and qualifying matches, the 32-team fields per gender are set.  Current Photo via FIVB

One hundred teams (55 men’s and 45 women’s) made their way to Espinho, Portugal for a chance to compete in the FIVB Four Star event this week.

Thirty-two teams per gender will participate in the main draw, with 24 earning spots right away and eight joining the main draw after qualification matches on Wednesday and Thursday.

Top seeds of the tournament are Melissa Humana-Paredes/Sarah Pavan of Canada on the women’s side amongst a field that already includes three American teams, two from Canada and two from Japan and pairs from 14 other countries.

Action began on Tuesday with country quota matches for the Brazilian women. Ana Patricia Ramos/Rebecca Cavalcanti Barbosa Silva bested Josi/Lili in straight sets to move on to the qualification rounds (23-21, 21-17).

Once in qualification, eight women’s teams from eight different countries played their way to the main draw. All 12 matches ended in straight sets.

On the men’s side, after 19 matches, five that ended in tiebreak, two German teams and six from other countries including Americans Evans/Kolinske, are through to the main draw.

Turkish side Safa Urlu/Hasan Mermer were the lone team to go the distance in the first qualifying round, besting France’s Olivier Barthelemy/Romain Di Giantommaso (15-21, 21-17 ,15-11). The pair was not as fortunate in its second match, falling via tiebreak to Germany’s Julius Thole/Clemens Wickler.

In addition to Thole/Wickler, the following teams claimed a spot in the main draw.

Six of the eight qualifiers made their way through two matches on the day. Ricardo/Guto (Brazil) and Thole/Wickler earned byes to the second round.

Americans Evan/Kolinske topped Nicolo Conti/Francesco Cottarelli of Italy in straight sets before moving on with a 21-11, 15-21, 15-11 win over Norway’s Mathias Bernsten/Hendrik Mol. 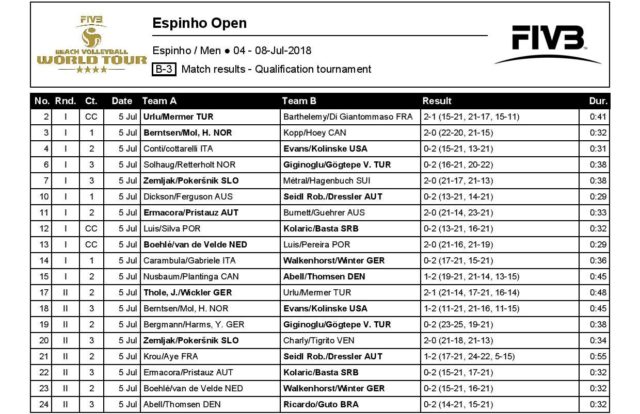