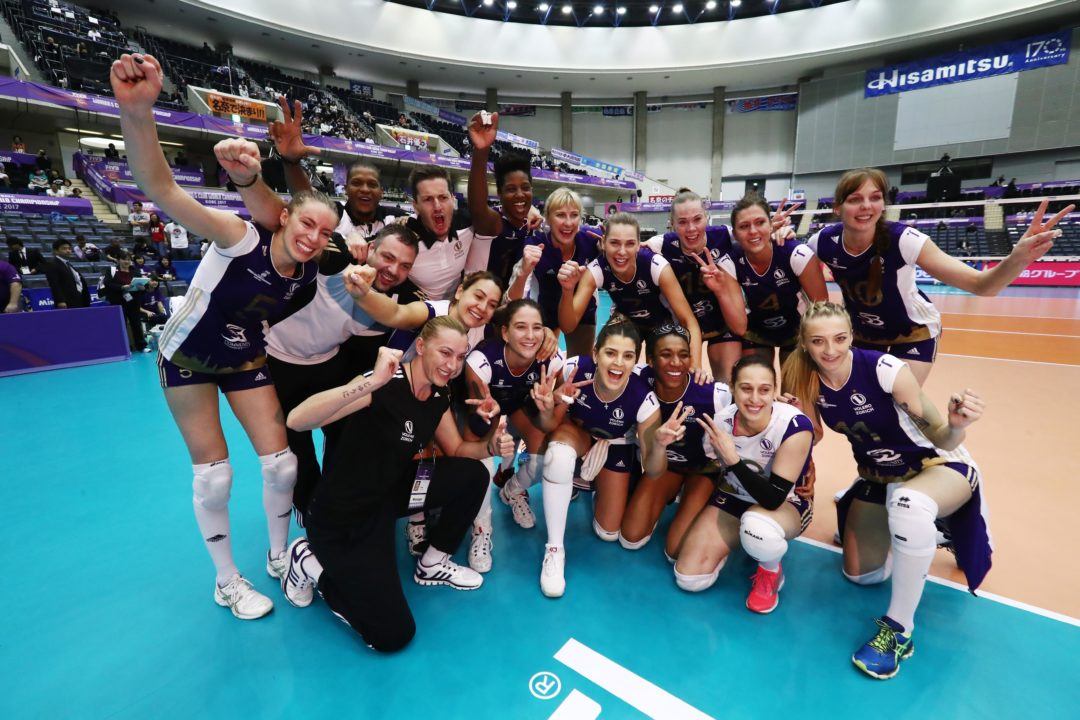 The Swiss team snagged a 15-12 victory in Set 5 to take a 3-2 win over Eczacibasi Vitra for the Club World Championships bronze medal Saturday night. Current Photo via FIVB

After giving up a 2-0 lead in the match, Swiss champions Volero Zurich bounced back when it mattered most, snagging a 15-12 victory in Set 5 to take a 3-2 win over Eczacibasi Vitra for the Club World Championships bronze medal Saturday night.

“It was a good game,” Volero Zurich coach Zoran Terzic said. “Every season this competition gets stronger. I am satisfied to get a medal. We finally played well under pressure. This is the first medal for me in this competition. I hope to get some more in the future.”

In an evenly matched contest, Volero managed 65 kills to just 54 for Eczacibasi and served up 10 aces to three, but the Turkish side stayed in the match with 16 blocks (to 11 for Volero) and forced 26 errors.

Tijana Boskovic carried Eczacibasi with 24 points, with 21 kills, two blocks and an ace, while Tatiana Kosheleva added 14 points, with much of them coming in sets three and four. Koshelova managed 10 kills and four blocks. Hande Baladin chipped in 10 points, care of seven kills and three blocks. American Jordan Larson-Burbach added three points, with two kills and a block.

“This was an important win for our club,” Volero’s Natayla Mammadova said. “It was good to finish the season with a positive feeling. I’m happy to get a medal and end the season like this. I’m proud of our team. It has been a tough season. Our opponents came back fighting hard after the first two sets.”

In a tight first set, Volero led 8-6 early and held a narrow 16-15 edge later after a kill by Orlova. A service error gave the Swiss a little breathing room at 20-17. A Rykhliuk kill clinched it at 25-22.

Volero stormed out to a 10-3 in Set 2 and led 16-6 at the second technical timeout. The squad then maintained the 10-point advantage the rest of the way as Eczacibasi struggled in the 25-15 loss.

Eczacibasi regrouped at intermission and came out of the break to score six of the first 10 points in Set 3, including an Arisan block. Volero battled back to go ahead 16-13 at the second technical timeout, but Kosheleva knotted things up at 17 with a kill. Eczacibasi continued its 7-1 run to go up 20-17 on a hitting error. Boskovic sealed the win and extended the match with her seventh point of the set.

The teams were knotted at 12-all midway through Set 4. Eczacibasi took a 15-13 lead on a Boskovic putaway, but Volero answered with five of the next eight points to go ahead 18-16. The teams tied at 19 and 21, but Eczacibasi held strong for the 25-23 win.

The decisive fifth set saw Volero lead 8-6 at the changeover. Down 9-6, Eczacibasi called timeout and responded with a 5-2 run. The Turkish side tied things up at 11-all.  A Carcaces ace gave Volero Zurich a 13-12 edge. An Orlova putaway and a hitting error by Kosheleva capped the match and captured the bronze for Volero.

“It was a tough match and our opponents deserved to win,” Eczacibasi coach Massimo Barbolini said. “There were important little things that they managed to do. Both teams put on a nice show for the spectators. I am disappointed we lost a chance to get a medal in this tournament. We did all that we could today. This tournament was a good experience for me and the team.”